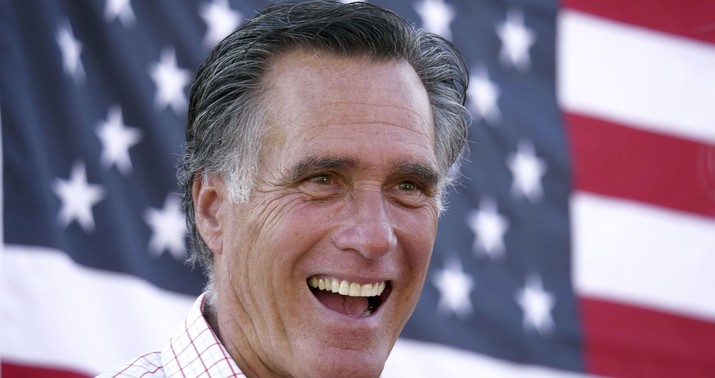 I’m teasing you a little with that headline. Obviously it wasn’t a good night for George-Conway-style Never Trumpers who wanted nothing less than a landslide repudiation of the president. Four hundred Biden electoral votes, Republicans crushed downballot, Trump collapsing into heaving sobs during his concession speech and calling Biden “daddy.”

Not a good night for those people.

But for less hardcore Never Trumpers who wanted the president beaten but also wanted a check on the Biden administration so that AOC didn’t end up setting policy, things are shaping up pretty nicely. A Biden win is still in doubt, as is a Republican majority in the Senate, but if you were betting right now you’d bet on both. We’re looking at a moderate Democratic administration having to compromise with a narrowed Democratic House majority and a Republican Senate majority in which Joe Manchin, Kyrsten Sinema, Susan Collins, and Lisa Murkowski get to decide what becomes law and what doesn’t.

We may even get a Republican senator from Michigan before all’s said and done. And the GOP would be well positioned to build on their margins in 2022, as the party usually fares well in midterms when a Democrat is in charge.

As Ed noted earlier, it’s already dawning on liberals that their best-case scenario for the next four years is a Biden administration that doesn’t get much of anything done legislatively. Bad for Dems, but not bad for Never Trumpers! Eric Levitz:

All of which is to say: If I had to guess the ultimate outcome of this election, I’d say we’re in for a Democratic White House and a Republican Senate. Which would mean that, while Joe Biden would get to be president, he probably wouldn’t get to pass major laws, appoint non-conservative judges, or staff his Cabinet without giving Mitch McConnell some input into his hiring choices. What’s more, after two years of disappointing his supporters by implementing roughly none of his big campaign promises — and, quite possibly, failing to provide an ailing economy with any significant stimulus — Biden would likely see his party further routed in 2022, as Republicans would enjoy the turnout advantage that almost always accrues to the president’s opposition in midterms. Combined with the Senate’s massive overrepresentation of Red America, this would quite plausibly prevent the Democratic Party from securing unified control of the federal government — and thus the ability to make any progress on universal health care, or a green-energy transition, or immigration reform, or voting rights, or child care, or any other major policy priority — for the rest of this decade.

Biden’s still likely to prevail in the 2020 election. But if he does, he’s (almost certainly) going to win a lot less than he’d bargained for.

Don’t threaten me with a good time, Eric. Stephen “redsteeze” Miller puts a happier spin on the Dems’ predicament:

Filibuster remains. No Green New Deal. No court packing. No statehood for Washington DC and Puerto Rico and with them four new Senate seats. No massive defunding and restructuring of police. Nothing. The activist left has been neutered for now. Thanks to a newly tilted Supreme Court, Biden’s attempts to executive-order his way around Congress have been severely crippled as well. Biden will occupy the Oval Office while the national media gives Kamala Harris the presidential treatment. This should suit the political right just fine. A Mitch McConnell-led Senate will also force a President Biden to moderate his Supreme Court choices…

The Democratic party may well secure the White House, but it will by no means have an electoral mandate, likely having done so with only a handful of electoral votes. It makes you wonder how President Trump would have fared in a year without a global pandemic, a year when he’d perhaps reined in his most Trumpian personality traits. But what the election revealed is the path forward for the GOP: a mix of economic populism and nationalism, but this time without the tweets (if Trump decides against running in 2024, that is). The 2020 election was by no means a sweeping rebuke of Trump’s policies, as the media and pollsters has been telling us it would be, nor was it the crashing blue wave the Democrats wanted.

The question is whether we get total gridlock, with McConnell reprising his 2009 strategy of blocking everything in hopes of making Biden a one-term president, or if the centrist cluster of Manchin et al. gets some say in what comes to the Senate floor. McConnell and Biden have known each other for decades from their time together in the chamber; there may be a little more wiggle room for compromise between them than there was between Cocaine Mitch and Obama. Democrats aren’t getting an assault-weapons ban or anything like that, but maybe the two sides will be able to get creative on economics. Most of the GOP caucus will be back in pretend-deficit-hawk mode, but not everyone — especially now that Trump’s economic populism has new potency after last night’s epic surge at the polls. If, say, Marco Rubio and Mike Lee want to expand the child tax credit, is there a bloc within the Senate GOP that includes 2024 hopefuls that’s willing to do that? Before last night, no. After last night…

Blunt but accurate verdict from last night: electorally, America actually is pretty on-board with the new GOP-style populism but has had enough of this Trump bullshit.

In a funny way it's the worst possible outcome for the activist woke left.

That’s sort of true about wokesters. They wanted total Democratic control of government to advance their agenda, but failing that they would have taken another term of Trump as a foil which could use to build out their ranks. What do they have now? Sleepy Joe in charge — probably — and a gridlocked Congress, with Republicans likely to make gains in 2022.

By the way an interesting quote from McConnell’s post-victory press conference today:

Note the timeline — he wants it done by the end of the year. That’s good policy inasmuch as the money is urgently needed as the economy slows down but it’s also good politics in that he’s staring at one and possibly two Senate runoffs in Georgia in January. If there’s no stimulus by then, David Perdue and Kelly Loeffler would be facing a Democratic onslaught from Jon Ossoff and Raphael Warnock running on a platform of going much bigger on a stimulus than Republicans would prefer. That’d be a hard message to counter at a moment of rising economic pain and COVID-related despair. McConnell’s going to try to take it off the table with a deal before then. We’ll see if Pelosi obliges him.

As for Never Trump, although many of us can live satisfactorily with a Biden/McConnell government, I can tell you that this sentiment is shared widely today within the ranks, and not just among hardcore NTers. The reason I predicted a narrow Trump victory last night despite month after month of blogging polls showing a Biden blowout was because I just couldn’t believe that this country, at this stage of its decline, would actually punish Trump for his civic offenses. I asked myself this: Might the people of America, having absorbed that spectacle in Lafayette Park in June, actually turn around and say, “I want to give this guy four more years in power and this time I want him to be totally unaccountable to voters“? And the answer was … yeah, they would absolutely do that. I don’t know if that’s who we always were but it’s who we are now. There’s a nonzero chance that my prediction, Trump 279-259, will end up within a single electoral vote of coming true. Stay tuned.

More Troubling Testimony in PA Senate Hearing: 100,000 Ballots In Question, According to Witness