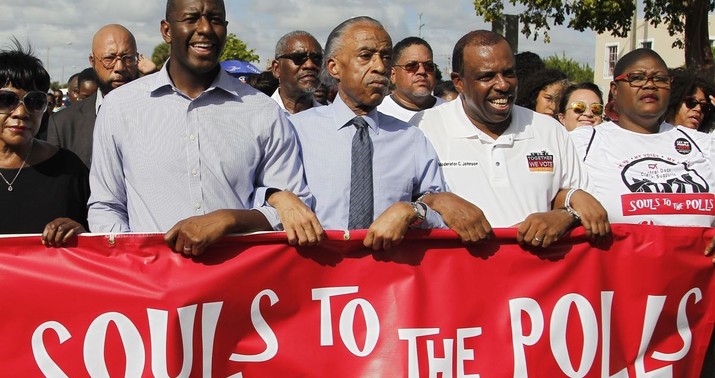 Despite the fact that polls in both states are pure toss-ups, I’ve somehow talked myself into believing that (1) Florida is a near-lock for Trump and (2) Biden’s going to flip over the table by winning Georgia, which will leave the president at dire risk of defeat.

Biden leads by a point and a half today in the RCP average of Florida. (Trump led, barely, in the final average in 2016.) Trump is ever so slightly ahead in today’s average of Georgia. The bottom line is that POTUS needs both and Biden doesn’t technically need either, although it would be an ominous trend for Democrats if two of the country’s most hotly contested swing states went red early.

Why do I feel so confident about Florida breaking for Trump? For starters because polls there have underestimated Republicans, sometimes grossly, in each of the last two cycles. But mainly because Democrats have been complaining, loudly, to the media for months that Biden wasn’t doing enough to compete for black and Latino votes. Ed and I have covered that ad nauseam so I won’t belabor it, but Florida is so perennially and intractably tight that it feels like any obvious error there is necessarily fatal. Biden took minority voters for granted? Well, that’s an error, so Biden’s gonna lose. QED.

The latest bit of evidence: Yesterday was the “Souls to the Polls” event in Miami-Dade, wher Dem organizers to turn out black voters. You should know by now how nervous Team Joe is about the poor numbers they’ve seen thus far in M-D. Yesterday was their chance to turn that around. Guess what.

On the Day of the Dead on Sunday, the lively sights and sounds of the 2020 election were hard to escape in several corners of Miami-Dade County on the last day of early voting.

But by Sunday night, the county’s Elections Department reported weak turnout for the day compared to 2016’s final “Souls to the Polls” Sunday ahead of Election Day. About 35,800 votes were cast on Sunday, compared to 53,098 on the same Sunday in 2016 —a decline of 33%.

Still, Miami-Dade Democrats pulled ahead of Republicans Sunday on the early-voting score after dominating a less busy “Souls to the Polls” day of final early voting.

Here’s where I get to be a contrarian towards my own instincts, though, and argue myself into thinking Biden still has a shot. First, although Republican turnout in Miami-Dade has been higher than Democrat turnout (as a percentage), Dems are outperforming the GOP in some other counties:

Broward: The most Democratic-blue county in Florida has put up a significant advantage in votes cast so far.

A total of 69.2% of the county’s registered Democrats have already voted compared to 66.3% of Republicans.

By the numbers, that’s 438,464 Democratic and 178,617 Republican votes. Without that 259,847 Democratic advantage from Broward, Republicans would be notably ahead in Florida.

Broward has sometimes been a laggard in turnout, causing lots of gnashing of teeth among Democratic activists. So far, the opposite is true for 2020. Democratic turnout in Broward is 2.9 percentage points higher than the statewide Democratic turnout.

Second, some polls show Biden winning more Republicans than Trump is winning Democrats, and some of them see him winning *big* among independents. Quinnipiac (which has a bad record in Florida, please do note) has Sleepy Joe taking seven percent of R’s versus Trump taking three percent of D’s. They also have him up by 16 among indies. The last NYT poll of Florida has Biden winning five percent of Republicans to Trump’s two percent of Democrats and had him up even bigger among independents, by 18. Four years ago against Clinton, Trump and Hillary each took eight percent of the other’s base according to the exit poll. And it was Trump who won independents that year, by four points.

And then there’s seniors. Trump won them by 17 against Hillary. The Times poll has him … a point ahead. Quinnipiac has Biden up seven(!) among that group, en route to a — highly unlikely — five-point win in Florida. Nate Silver’s averages are more down to earth, but Biden again has narrow leads among indies and cross-party voters:

Although of course we're scrambling party ID and party registration here, with those numbers, Biden would be a favorite in a GOP +3 electorate or anything bluer.

Logically, the analysis of Florida should begin from the same place the analyses of Michigan and Pennsylvania begin. Namely, Trump *barely won* there four years ago. He’s facing a stronger, much more popular opponent now, one who’s surfing a wave of antipathy to Trump among suburbanites that first showed up two years ago and who looks set to parlay seniors’ dissatisfaction with Trump over COVID into major gains with that demographic. Trump has made some gains of his own, notably with Latinos and black men, but it’s not like he’s swung those groups behind him the way some polls show Biden doing with 65+ voters. He’s made marginal improvements with both groups that could be decisive if the race is very tight.

But based on all of the foregoing, is it likely to be very tight? Or is it likely that the pandemic plus Biden’s greater likability relative to Hillary will be worth, say, three points that’ll hand him the state?

I dunno. I still think Trump wins it, but that’s really based on nothing more than “his fans really love him” and, as I say, the fact that pollsters keep lowballing GOP candidates there. The hard truth on Florida is that it’s one of the less interesting swing states tomorrow night, one that can lose him the election but can’t win it for him and probably won’t tell us much about which way the country is trending if he secures a narrow win. If you want to know who’s going to be president next year, watch North Carolina, Georgia, and Arizona instead. And then, if Biden’s lost all of those, get up bright and early on Wednesday for the mail-in counts in the Rust Belt.