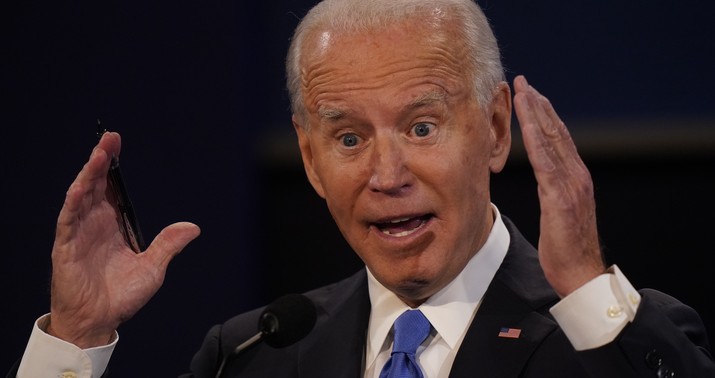 Verrrrry concerning for Team Joe, although I’ll remind you up front of the big twist of this election: Each candidate is underperforming with their traditional base. Biden’s doing a little worse than Hillary among black voters and conspicuously worse among Latinos in various surveys. But he still leads in nearly every battleground because he’s making up for those lost votes by taking a bigger chunk out of Trump’s white base. That’s the whole story of the CES mega-poll I posted earlier this afternoon.

Having said that, obviously there’s a limit to how much black and Latino support Biden can afford to shed before he can’t make up the difference by taking votes from Trump. And if those two groups tank for him in Florida and Pennsylvania especially, suddenly we have an election whose result is in doubt.

It would be a fitting conclusion to a year as weird as 2020 if the president got a second term because minorities turned out to be Trumpier than everyone thought.

The situation is particularly stark in Florida where Republicans currently have a 9.4% turnout advantage in Miami-Dade County, a place where analysts say Biden will need a significant margin of victory to carry the state.

Ed covered the underwhelming Democratic turnout in Miami-Dade this morning, where fingers are already being pointed by local operatives at Biden’s campaign. That’s a theme of the Bloomberg story excerpted above as well. Clearly Dems on the ground in Florida think things are going sideways and they want the media to know bright and early that it’s not their fault. It’s Team Joe’s fault for a poor outreach effort to blacks and Latinos in FL.

[A] Biden campaign staff member in Florida said coalition directors, those responsible for turning out the vote among specific demographic groups, have never been given a budget, despite repeated requests for funds they can allocate. The staffer said colleagues have spent their own money to put on voter engagement events, but the lack of coordination with senior leaders has stymied their efforts to do what the staff member called culturally competent outreach in critical parts of the state.

Minority staffers within the campaign reportedly sent multiple proposals over the past few months about how to increase nonwhite turnout but the documents were ignored by campaign management, or so they say. These same staffers told Bloomberg that they “feel that their communities are misunderstood by top Biden officials.” Having recriminations begin before the vote is in is a bad sign for a campaign. Having recriminations begin along racial lines before the vote is in is … hoo boy.

I’ve assumed all along that Trump would carry Florida, since the polls are forever underestimating Republicans there. Think I’ll go ahead and just color it in red on my map now.

Or should I? Dave Wasserman, the Cook Political Report analyst who’s probably the most bullish forecaster in the field on Biden, is chill about the slow pace of nonwhite turnout early:

In other words, we've known all along that Biden's most promising path to 270 isn't running up a huge turnout advantage among non-whites so much as winning a higher *share* of whites.

The biggest obstacle to 270 for Trump remains defections of white women & seniors.

“VBM” is vote by mail. In other words, Wasserman wasn’t expecting high turnout among minorities. Of course, Wasserman isn’t being paid by the Biden campaign and privy to all of their internal targets on turnout. If the campaign itself is starting to sweat about underperforming in Florida, that’s a big deal.

But further to my point above about Biden replacing missing black and Latino votes by taking votes from Trump’s coalition, here’s a possible bellwether spotted by Wasserman in Florida:

Has Biden gained enough among seniors relative to Hillary that he can still win the state despite losing more nonwhite voters than she did? We’re about 100 hours away from finding out.

I’ll give you one more bit of data. This data comes from the last Fox News national poll of the campaign, just published this evening:

Biden is 20 points off of Clinton’s pace with nonwhite voters here. What overall result do you think that would portend?

Answer: Biden 52, Trump 44, nearly identical to this morning’s CES mega-poll. How can Sleepy Joe be up eight nationally when he’s hemorrhaging minority voters? Because, once again, he’s cleaning up in former Trump demographics. Fox has him up 10 points among seniors, a group Trump won by nine in 2016. And they have him up 22 points with independents, whom Trump won by a point four years ago. He’s making 20-point gains with big groups to offset 20-point losses among smaller ones. (He’s also 20 points ahead of Trump in net favorability, with a +11 rating versus a -11 rating for Trump.) He’s *probably* going to win late-deciders too, to the extent there are any still out there.

But yeah, needless to say, there’s peril for him in underperforming with his own base in a state as consequential as Florida. If he’s doing poorly at turning out black voters there, he may be doing poorly turning them out in Pennsylvania as well. And if Trump suddenly has a strong chance to take both states, that means Biden’s got to flip one or more other toss-ups — not just Michigan and Wisconsin, which are basically must-win for him, but North Carolina, Arizona, Georgia, Ohio, or Iowa. 100 hours to go!