The obligatory “how ’bout that Iowa poll” post, plus a bunch of other polls 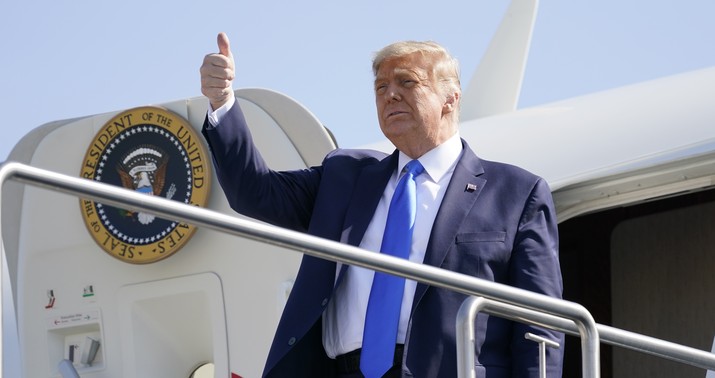 Nate Cohn of the Times calls last night’s bombshell from the Des Moines Register Trump’s single best poll of the entire campaign. I agree. If you’re starving for signs of a late break towards the incumbent, particularly in the midwest, you just got one. And not just from any ol’ pollster either. This is Ann Selzer, the most respected electoral thermometer in Iowa.

A fun fact about her: Her last poll of the state in 2016 also had Trump up seven points. He went on to win by nearly 10. En route to winning the entire election, of course.

To make things extra zesty for the GOP, this same poll also finds Joni Ernst surging past Democrat Theresa Greenfield in Iowa’s Senate race to take a 46/42 lead. Ernst trailed Greenfield in nearly every poll taken from mid-September to mid-October, but in the last two weeks there’s been a shift. It looks like Iowans are coming home to her, which may just save the Senate for the GOP. They’re coming home to Trump too.

The president now leads by 7 percentage points over Biden, 48% to 41%. Three percent say they will vote for someone else, 2% aren’t sure and 5% don’t want to say for whom they will vote…

“I think that the key to what’s happening with President Trump is that he is leading with independents,” Selzer said. “That is a group that in Iowa in our September poll looked like it was swinging to Joe Biden, and it’s come back to be a Trump asset.”

In addition to fading with independents, Biden has lost ground with women. In September, he held a 20-point lead among women, which balanced out Trump’s 21-point lead among men. But today, Biden’s lead with women has shrunk to 9 percentage points, 50% to 41%.

Biden slipping by double digits with independents and especially women in the final days of the race would be … surprising given the national polling. But Iowa was a very red state four years ago so it’s not hard to imagine women and indies there behaving a little differently from their counterparts in purpler places. Here’s the trend in Iowa in RCP’s polling average over the last 30 days. Looks to me like Iowans had a fling with Sleepy Joe after the double whammy of Trump’s terrible first debate and the fiasco of the White House suffering a COVID outbreak that infected the president himself. But the affair may now be over.

It’s hard to overstate the amount of panic that set in among anti-Trumpers last night on political Twitter when the Selzer poll dropped. People are coping this morning by muttering nervously to themselves, “W-w-w-we should trust the average, not any individual poll.” But there are a few reasons to be skeptical of Selzer’s result, starting with the fact that her result is an outlier this time whereas her final poll in 2016 showing Trump up seven was not. Other pollsters that year had him ahead by six or eight points in the final weeks; this year she’s the only one to have him ahead by more than two(!). Cohn added more perspective on Selzer’s data in his write-up this morning:

We just had a similar case in the opposite direction: an ABC News/Washington Post poll earlier this week that showed Mr. Biden ahead by 17 points in Wisconsin. When that poll came out, I noted that it should move your view of the race toward Mr. Biden, even though it was clearly an outlier. The same is true of this survey: It should move your view of the race in Iowa toward Mr. Trump. Indeed, he now leads in our Iowa average by two points…

The Selzer poll has an exceptional track record, but any pollster with as many polls under her belt as Ms. Selzer will inevitably wind up with misses — even bad misses. As I put it ahead of the Iowa caucus in 2016: “Of course, even if Ms. Selzer’s methodology was perfect, there’s no reason to expect her results will be. It’s the nature of the game; even a perfectly conducted poll will occasionally yield imperfect results, and sometimes terrible ones.” Her final poll, released that day, showed Mr. Trump leading by five points; Ted Cruz would win by three.

Selzer’s numbers last night in one of Iowa’s congressional races were also far, far more Republican than other polling suggests, to a seemingly unrealistic degree. That’s probably just a function of using a small sample for the congressional polling, but for what it’s worth:

Monmouth found it D+8 a week ago. Was Trump +3.5 in ‘16, Finkenauer +5.3 in ‘18. NRCC spending middling $$ and the GOP internal they put out to keep their fundraising alive a month ago had the race tied.

The proper approach to Selzer’s poll isn’t to try to “unskew” the numbers by scrutinizing congressional data, it’s to look at all of the other polling that’s come out in the past 24 hours and ask the only important question: Is the rightward shift that she’s seeing in Iowa happening in more important battlegrounds? Neither candidate really needs to win Iowa, after all. It’s six electoral votes, important only if the electoral college is shockingly close. And because Trump won the state so easily in 2016, by nearly 10 points, it’s assumed that IA will stay red this year by an unknown margin. (Same goes for Ohio.) What we all want to know about is Florida, Georgia, Arizona, and of course the Rust Belt. Is the reddening tint in Iowa showing up there?

Leading by two in Florida is great news for Trump but a seven-point deficit in Pennsylvania with Biden over 50 percent is daunting. I’m tempted to say that Florida is overrated in this election cycle, frankly. We pay it tons of attention because there are so many electoral votes at stake there and the state invariably is decided by one or two points, but here’s a thought to chew on: Biden could lose Florida and still end up with more electoral votes than Trump won in 2016 if he comes through in the midwest, North Carolina, Georgia, and Arizona. He has various paths to the presidency that don’t involve FL. Trump doesn’t. He needs Florida and Pennsylvania, and according to WaPo he’s only getting one of them.

The Times also has battleground polling out today:

They have him losing the two big ones that he needs, with PA once again in the six- or seven-point range — not particularly close. In fact, polling in Pennsylvania right now is a death match between pollsters that are aligned with the GOP (Trafalgar and Insider Advantage) and everyone else. The Republican pollsters have the race tied or Trump narrowly ahead. Everyone else has Biden up five, six, or seven.

Note the Times’s gaudy number in Wisconsin too. Literally no one has Trump ahead right now in WI, including Trafalgar; they have him down a point to Biden while others see him trailing by eight or nine points in some surveys. In fact, Biden’s leads in Wisconsin and Michigan look so sturdy right now that they’ve begun to slip out of the conversation among election-watchers, who are obsessing about Pennsylvania instead. If those two states are in the bag then Trump is down to 280 electoral votes from his 2016 states with Pennsylvania, Florida, North Carolina, Georgia, Arizona, Ohio, and Iowa all in play. He’d need to win virtually all of them to hold on, or else to flip a 2016 blue state like Minnesota. And if Wisconsin and Michigan are in the bag, we’re left to wonder how likely the odds of an upset in nearby Minnesota can really be.

One more poll. This is NBC’s final national survey of the campaign:

Think of everything this country’s gone through since August 2019. The race has changed by a single point since then. If Biden ends up winning easily on Tuesday, it’ll be worth bearing that in mind afterward. For all the hype about the pandemic having defeated Trump, the fact is that the electorate seems to have turned against him long ago. At least when Joe Biden was offered as the alternative.

Remember too that the final national polls in 2016 were pretty accurate. There were some big misses in state polling (Wisconsin most of all) but national polls on average had Clinton winning by around three points when in reality she won by two. Trump can’t win the electoral college if Biden wins the national popular vote this time by, say, seven. There’ll be too many votes against him banked in battlegrounds to make another series of white-knuckle victories in every last one of the states he needs possible. Both Cohn and Nate Silver made the same point this morning that I and many others have made this week — it’ll take a much bigger polling screw-up this time for Trump to win than it took in 2016. In fact, when Silver adjusted his site’s data to see how Trump would do on Tuesday if polls underestimated him by exactly the same amount as they did in 2016, he found that Biden still wins 335 electoral votes. In some states, like Florida and Pennsylvania, Sleepy Joe’s victories would be *very* narrow, but Trump’s wins were very narrow in 2016 too.

One last point. The most interesting revelation in all of the polling I’ve just listed is the Times’s finding that people who didn’t vote in 2016 but are voting this year lean heavily towards Biden. In Florida they favor him by 17 points, and by 12 in Pennsylvania. It’s impossible to know how much the blockbuster early turnout in places like Texas is being driven by anti-Trump sentiment, but if there’s a big surge of irregular voters coming off the sidelines this year to vote him out then he’ll need even steeper turnout on Tuesday from his base than he’s probably counting on.