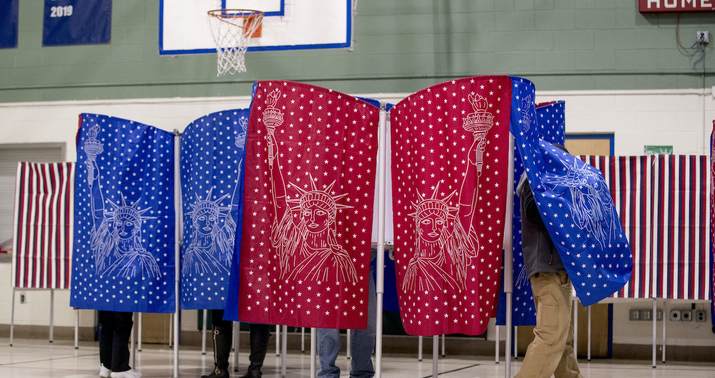 No one, including me, will believe Texas is truly in play unless and until it’s called for Biden on election night. It’s not just decades of Republican domination informing that, it’s the fact that it’s one of the few “battlegrounds” this year where Trump continues to lead in the polls. RCP has him up by an average of 2.3 points and FiveThirtyEight’s model gives him a two-thirds chance of winning.

We all have firm expectations of what an election in Texas looks like. Turnout tends to be low because there’s no point in voting. We all know who wins in the end.

So what do we do with an early piece of information that confounds those expectations in a shocking way?

Texas makes it harder to vote by mail than most other states. Absentee ballots are limited to those 65 and older, the military, and true absentees. To make voting in person a bit less onerous during a pandemic, though, the state added an extra week of early voting this year, reducing congestion at the polls. And Texans have fully — fully — availed themselves.

NEW: We just hit our highest voter turnout. Ever. Nearly 1.4 million votes have been cast in Harris County and we’re not even done with Early Vote yet. Let’s run up the score, Texas!

Harris County is where Houston is located. They’ve been running 24-hour polling places in some areas, allowing night owls to turn out in the wee hours. Meanwhile, in Austin:

Travis County Clerk Dana DeBeauvoir says the county has exceeded total turnout from the 2016 presidential race. Polls are open at all 37 early county voting locations through Friday, and 5 of those locations will now stay open until 9 pm. pic.twitter.com/LQ4W0JRKAC

One possibility to explain the high turnout is that it’s a “spite” vote. People wanted to vote by mail to avoid putting themselves at risk of infection at polling places, the state wouldn’t let them, so maybe Dems decided to turn out and stick it to the Republican government. That’s pure speculation, but it’s what appears to have happened earlier this year in the Wisconsin Supreme Court election during COVID’s spring wave. Democrats wanted it postponed, Republicans blocked them, so Dems lined up and handed their candidate a landslide victory.

The problem with extrapolating that theory to Texas is that … we have no idea who’s voting. Voters there don’t register by party so there’s no way to tell if early turnout is shaded red in the aggregate or blue. I think the AP has it right, though, when it says that “For Democrats, anything different is likely positive.” More specifically, having major urban areas crush their turnout four years ago can only portend good things for Biden:

The demographics also suggest that the usual expectations may not apply this year:

More than one million voters under the age of 30 have already cast their ballots in Texas — that’s almost a 165% increase from all of 2016: "Younger voters could turn Texas blue this year. It's a real possibility for the first time" @JanetShamlian reports https://t.co/fZ7BRd8PYk pic.twitter.com/aj62JBAmlB

There’s also the fact that Trump has never been tremendously popular in Texas. Just once in the Texas Tribune’s tracking poll over the last three years has he exceeded 50 percent in job approval:

There’s an X factor in Texas too: COVID. The state’s not suffering right now the way the midwest is, but it had the most new cases in the country yesterday and parts — namely, El Paso — are struggling badly enough that they’re about to impose a new two-week lockdown to try to protect hospital capacity. The pandemic is Trump’s biggest electoral liability. If Texans go to the polls Tuesday with coronavirus on their minds, that would also force us to revisit expectations.

Election experts have been chattering on social media over the past week about how, if Texas flips, it won’t be the suburban areas trending blue that’ll finish Trump off. It’ll be the border counties with large Latino populations. And, per the AP, they’re a notable exception to the early-voting outburst that’s been happening elsewhere across the state:

The spike in early voting is most apparent in suburban counties around Dallas and in areas outside Austin, especially those south toward San Antonio. One area that has not seen voting rise dramatically, however, is the Rio Grande Valley, where Harris will be. Its population is about 90% Mexican-American and it is among the state’s youngest and fastest-growing areas.

In Hidalgo County, which includes McAllen, early voting has only increased by about 1% compared to 2016, despite the extra week to do so — far below the at least 15% increase in nearly every other large Texas county…

Its also been among the hardest hit areas in the nation by the coronavirus and has seen new cases soar in recent weeks as they have in many parts of the country.

Guess where one of Kamala Harris’s stops is in Texas today. Yep, McAllen, in Hidalgo County. She’s also swinging by Houston to try to run up the score on Trump locally and then on to Fort Worth, which Trump won in 2016 but which turned blue in the midterms for Beto O’Rourke. I assume Texas won’t get a visit before Tuesday from the nominee himself, as it’s much more important for him to lock down Pennsylvania than to waste several hours on a longshot. But Biden must be tempted by the early-voting numbers, as well as the fact that Texas should have a final result on Tuesday night due to the limited number of mail-in ballots. Nothing would crush Trump’s plans, and the plans of his allies, to whine about fraud in the Rust Belt because of the high number of votes by mail like flipping Texas on election night. Stay tuned.