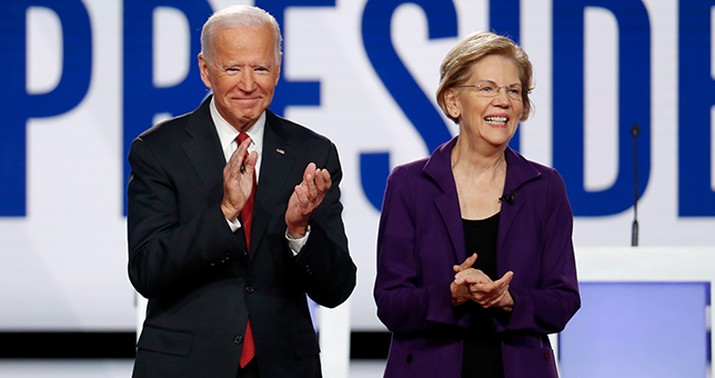 Bernie Sanders at Labor and Elizabeth Warren at Treasury?

I didn’t think President Sleepy Joe would be ready to go full communist so quickly.

I thought he’d sort of ease into it, like when Democrats slap a new tax on the rich and then start creeping their way down the income scale.

“This election is a choice between the AMERICAN DREAM and a SOCIALIST NIGHTMARE,” Trump tweeted earlier today. Free advice: He should make that a little more concrete in swing states by noting that Sanders and Warren want key economic positions in a Biden administration. The anti-socialist pitch is especially potent in Florida among Cuban-Americans and Venezuelan-Americans, who have firsthand experience with socialism red in tooth and claw.

Elizabeth Warren wants to be Joe Biden’s Treasury secretary and will make her case for it if he wins next week, according to three Democratic officials who have spoken with her inner circle…

Warren allies say that the job is appealing because it is a once-in-a lifetime opportunity to enact some of the “big structural change” she talked about during the presidential primary, rather than just pressuring Cabinet officials from her Senate perch. Much of her life’s work has revolved around the intricate rules and levers of power in the executive branch.

Warren also sees an opportunity amid the economic crisis wrought by Covid-19 to rectify what she thinks were mistakes in the Obama administration’s response to the Great Recession — namely, not doing enough to change the underlying systemic problems or focus on the most vulnerable.

As Trump might say: This country can’t tolerate a socialist Treasury secretary, especially a female.

I don’t think she’ll get it, as there are too many barriers. Wall Street would treat it as a declaration of war by the new administration, which a President Warren or President Sanders would welcome but a President Biden would not. (Financiers are bullish about Joe at the moment because he’d deliver something to them that Trump never could, stability and certainty.) Even if Biden were willing to antagonize them by nominating Warren, it’s an open question whether she could be confirmed. There’s no chance if Republicans hold the Senate majority, which admittedly is unlikely if Biden wins on Tuesday, but even a narrow Democratic majority might be skittish about Warren. If it’s 51/49, which way do Joe Manchin and Kyrsten Sinema go, knowing that conservatives back home will vociferously oppose Warren? What about if, say, Theresa Greenfield pulls the upset in Iowa over Joni Ernst? Does she vote for a hard leftist in one of her first official acts?

Even a biggish Democratic Senate majority would see its margins padded by purple-state freshmen who won’t want to get off on the wrong foot with Republican voters. I think they might be persuaded to support Bernie or Warren for the cabinet, but both is a lot to ask.

Then again, they have progressive voters who need to be appeased too. And progressives will be very excited about Sanders and Warren gaining control over a huge chunk of the federal government’s regulatory machinery. Maybe Biden could “balance” them by adding a Republican or two to the cabinet, or at least reserve all remaining top positions for Dems who are ostentatiously centrist. The freshmen senators might be able to have their arms twisted into voting for Bernie and Warren if they have plenty of cover from the center on all other major nominations.

Here’s Ilhan Omar dreaming some big dreams for progressives inside the Biden administration. Exit question via Peter Hamby: Why the hell are Warren allies leaking this news now, at a moment when it can only hurt Biden? For that matter, why did Bernie allies leak his interest in the Labor slot last week? Sleepy Joe isn’t struggling to consolidate progressive support. He doesn’t need anyone giving lefties a reason to turn out for him. They’re all-in on ousting Trump. Only the president benefits from these leaks, by having specific examples to cite the next time he accuses Biden of being a pawn of the left.

From “Defund Police” To “Call The Cops On Thanksgiving Dinner”