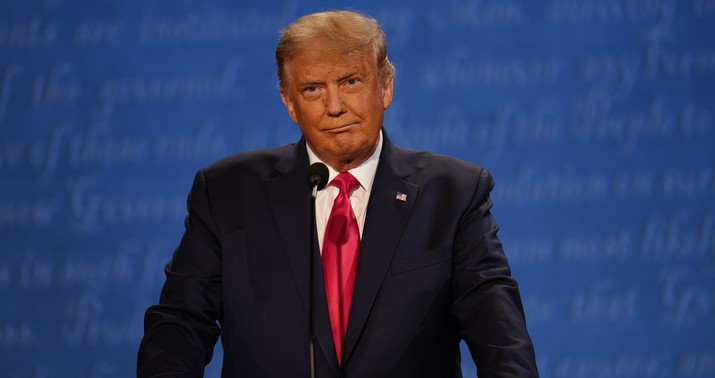 I’ll spare you another iteration of my spiel about how the most overexposed politician in American history probably isn’t moving any votes at this point with television ads, and therefore it doesn’t make sense to spend on them.

Especially in a state with multiple major media markets, where TV time is expensive.

Still, it’s a jolt to hear of a presidential candidate not going full throttle in the ultimate battleground a week out from Election Day.

Trump is now placing his final bet on just four battleground states: Michigan, Minnesota, Ohio and Pennsylvania. Polls show he’s down in all those states but Ohio, where it’s effectively even…

The president still has $350,275 budgeted to spend on ads in Florida through Election Day, but has canceled $5.5 million in the final two weeks of the campaign, according to data compiled from ad-tracking firm Advertising Analytics.

The Trump campaign says its organizational strength in Florida will carry it into Trump’s column on Election Night as Republicans get more in-person voters to the polls.

“You have to have a ground game. Joe Biden does not have one. The president does,” Trump communications director Tim Murtaugh said in a phone call with reporters Tuesday. “That’s why you saw the president close the gap in Florida.”

Biden’s spending $8 million in the final leg of the race, with millions more set for Pennsylvania, Michigan, and North Carolina. I think Florida is a sensible state for Trump to bail on from the standpoint of triage, knowing that he’s forced to take a calculated gamble somewhere. His campaign blew through its war chest and their fundraising hasn’t been able to keep pace with Biden’s (which itself is a bad sign of grassroots enthusiasm), so now they’re forced to pick their spots. Trump’s team is looking at Florida and reminding themselves that (1) he was underestimated there by the polls in 2016; (2) other Republicans were badly underestimated there in 2018 polling; (3) he’s overperforming with Latinos and has strong support among Cuban-Americans; and (4) he’s facing steeper polling deficits in must-have states like Pennsylvania than he is in Florida right now. If you’ve got a dollar to spend in either FL or PA, what’s the argument for spending it in the former? He needs to make up more ground in the latter.

So he’s rolling the dice, trusting that he’s ahead in Florida and the ground game will deliver for him on Tuesday. Or at least, that’s what he would be doing if the story quoted above about him giving up on ads were accurate.

But Politico says it isn’t. The ads will run. It’s just that the RNC will be picking up the tab instead of Trump’s campaign:

According to Ad Analytics, the suggestion that Trump is going dark on his TV buys in FL is false

The campaign switched payee to the RNC. Ads are still running.

The election is in a week.

Irresponsible reporting that was never checked with the Trump campaign.

The story should be retracted.

Trump’s going to focus his dwindling campaign resources instead on Pennsylvania, Ohio, Michigan, and, uh … am I reading the excerpt above right? He’s making a play for Minnesota?

That is verrrrry hard to justify. Maybe his internal polling is showing signs of an upset that no one else is seeing (remember that he got very close to flipping Minnesota four years ago), but in a year when he’s playing defense in battlegrounds and polls are showing a sharp leftward shift in states like Ohio and Iowa, it’s folly to think Minnesota is in play. Biden leads there by six points in today’s RCP average. If Trump ends up losing Florida by a whisker, there’ll be a lot of second-guessing about him trying to play offense in MN.

A friend involved in politics emailed me about the claim that Trump is dropping ads in Florida to say that he spoke to a Republican who’s tapped in and that person has heard from the campaign that Florida looks good for them per their internal polling. On the other hand, if you believe HuffPost’s sources, the Trump campaign actually isn’t doing much polling there at all:

One top Republican close to Trump, who spoke on condition of anonymity, said the campaign feels confident it has not lost that much ground with older voters and predicted a 3-point win next week.

“We’re in really good shape in Florida,” he said, but then added that knowing this with any certainty was difficult because the campaign is not conducting a tracking poll in a number of key states. “Florida, and we’re not polling. It’s weird.”

Rick Wilson of the anti-Trump Lincoln Project, who’s been a consultant in Florida for years, told HuffPost that “A lot of their polling contractors stopped getting paid in September, so they’re not doing work. They’re broke. They’re largely flying blind right now.” That may or may not be true, but it fits the picture of an operation that’s scrounging for cash to keep up amid Biden’s onslaught.

Which brings us back to a question that’s been asked repeatedly since the Trump campaign’s financial trouble became public knowledge. Why isn’t President Moneybags reaching into his wallet to help Make America Great Again, Again?

Trying to imagine the pitch to GOP megadonors to bail out Florida when the president's a billionaire, lives in the state, and has spent $8,000 on his campaign so far

FiveThirtyEight’s weighted polling average has Biden ahead in Florida by two points today, 48.8 percent to 46.8 percent. If Trump falls just short, his reluctance to self-fund is another topic he’ll be pressed on in the aftermath. A man with deep pockets who claims that the fate of America is on the ballot next week isn’t acting like it when it comes to his own checkbook.

Here’s the state of play in Florida’s early voting, by the way:

Tweet 1 of 4
FL GOP had a big day in the Early Vote & Absentee Ballot wars when they reduced the Democrats' margin by the biggest amount yet, 52,373

Election Day turnout is expected to be much more red than blue, though. Stay tuned.

I’ll leave you with this, in which the Trump campaign selectively cut a clip of Biden to make him sound demented even though he was quoting the Pope.

Joe Biden: “Why am I doing this? Why? What is my real aim?” pic.twitter.com/pNPfzirGjO