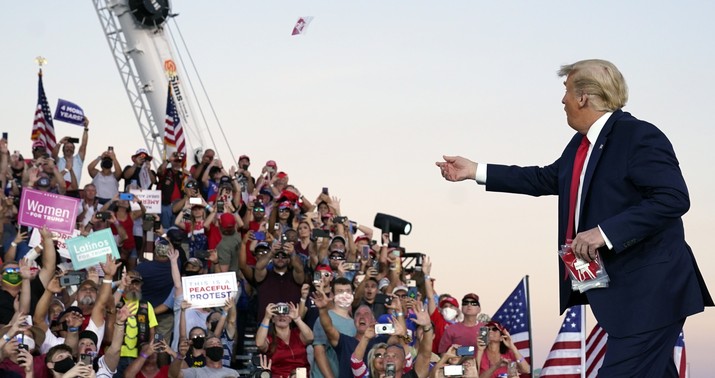 No resource will be more plentiful among Republicans on November 4 than scapegoats for Trump’s defeat if the current polling holds. The media, Never Trumpers, phantom illegal aliens voting, Chinese hackers surreptitiously tinkering with the vote totals — it’ll be a free-for-all.

But don’t sleep on the possibility of Brad Parscale becoming a top villain for how he mismanaged the campaign’s gigantic war chest before being demoted. Combined with the RNC, Team Trump raised $1.5 billion — billion — since the start of 2019, and at the start of October all they had to show for it was an eight-point deficit and a little more than $60 million in the bank.

Worst of all, Parscale was hubristic about his operation after the primaries this year, gloating about the damage the Trump Death Star was about to do to Planet Biden:

For nearly three years we have been building a juggernaut campaign (Death Star). It is firing on all cylinders. Data, Digital, TV, Political, Surrogates, Coalitions, etc.

In a few days we start pressing FIRE for the first time. pic.twitter.com/aJgCNfx1m0

Around the time he posted that, Trump and the RNC had an advantage of $190 million on their Democratic counterparts. As of October 1, the two parties’ fortunes had reversed, with Biden and the DNC enjoying an edge of around $180 million. Eliminating the RNC and DNC from the equation, the Biden campaign had nearly three times as much cash on hand as Trump’s campaign did — $177 million to $63 million. To put that in perspective, Politico notes that Mitt Romney had around the same amount in the bank as Trump now has for the final month of the 2012 campaign, a time when fundraising totals for both sides were less gaudy than they are today. The Obama campaign had $100 million to start that month — a little more than half of what Biden’s got.

There are two surprises here. One, of course, is that the Trump campaign squandered a huge advantage, but that’s old news to some degree. We’ve been writing about it since at least the beginning of September. The new numbers today simply quantify how much squandering has been done. The other surprise, and a bigger one, is how much harder Team Trump has had to work than Team Biden to raise money from the MAGA base. If there’s one thing I would have thought Trump could count on, it’s that his small donors would squash Biden’s small donors head to head this year. Trump’s the one with an enthusiastic following willing to do anything for him. Biden’s just “the guy running against Trump” to liberals.

But it turns out that’s enough this year. From the Times:

Recent campaign filings show how much more the Trump campaign’s joint operation with the Republican Party is spending to raise its money than Mr. Biden. The two joint Trump committees with the R.N.C. spent $190.8 million in July, August and September to raise $355.2 million.

The Biden campaign spent less than half as much on fund-raising from its two joint operations with the Democratic Party ($82.4 million) and yet raised far more, $457 million, during that same period.

The Trump campaign has to beg, the Biden campaign barely has to ask. Parscale spent big bucks to build a mega-database of potential donors but “as the election neared, hopeful projections for a large uptick in contributions have not materialized.” Put it all together and what does it add up to? Bad things:

On TV ads in September, Biden outspent Trump more than 2-to-1, $173 million to $69 million, according to Advertising Analytics, a media tracking firm.

The spending disparity looks even worse in the three Great Lakes states Trump flipped to win the White House in 2016, where the president is now getting drowned out on TV. In Pennsylvania and Wisconsin, Biden outspent Trump by more than 4-to-1 last month. The disparity was little better in Michigan, where Biden spent $15.3 million to Trump’s $4 million.

The future advertising picture looks similarly dire for Trump, heading into the final two-week stretch of the campaign. Biden is has reserved $63.8 million in TV ads across 20 states, while Trump has booked $31.9 million, and the deficit could get worse as the campaigns adjust their ad buys. Trump has been regularly canceling prebooked ad buys in Ohio, Iowa, New Hampshire and other states in the days before they are set to air.

It’s grimmer than it looks. Politico has another story today about Mike Bloomberg essentially taking over election spending in Florida for the Democrats, freeing up Team Joe to spend more heavily in the Rust Belt. That’s forcing Trump to spend more to defend Florida — an absolute must-win for him — and therefore less in the midwest. And at the end of the day, Biden will happily trade Florida for Michigan, Wisconsin, and Pennsylvania, as those three can get him to 270. Florida is gravy. “Basically, Trump has now been committed to the equivalent of land war in Asia by having to spend so much of his money in Florida,” said the head of one pro-Biden outside group.

Trump can always do earned media, like local rallies with free TV coverage, to whittle down Biden’s advertising edge. But whether the rallies do him more harm than good on balance at this point is anyone’s guess. His staff claims that they bring in new voters, but as he works himself up at the mic and wanders into talking about locking up his opponents, say, he ends up counterprogramming the kitchen-table message his campaign wants out there. I wonder what Bill Stepien would do right now if the financial tables were magically turned and he had a three-to-one cash advantage on Team Biden. Would he try to keep the president off the trail and unleash a barrage of ads about the country’s economic growth over Trump’s first three years in office? Would Trump take his advice — even if Stepien could show him hard statistical evidence that his chances of winning would improve if he stopped speaking off the cuff for awhile?

Trump’s interest in holding rallies reminds me of a point Ross Douthat made about him a few months ago. Most politicians seek attention as a means of gaining power, said Douthat, but Trump seems to have sought power as a means of gaining attention. If you told him he could win by simply keeping a lower profile, he’d probably say, “Then what’s the point?”

By the way, buried in this Politico piece about his campaign’s financial woes is are two interesting bits of news. First, a lot of the Trump campaign’s spending in September was funneled through an LLC that doesn’t have to disclose the names of its vendors. If he ends up losing, Republican donors may want more information on that. Was the money being spent to maximize Trump’s chances of winning, or was it being spent to line the pockets of cronies amid a darkening electoral picture that made victory seem unlikely? Second, Trump himself was reportedly considering putting $100 million into his campaign in early September. If he did that now, he could singlehandedly all but erase Biden’s advantage. The fact that he hasn’t leads one to wonder. Does he not have $100 million? Or is he unwilling to spend his money on a longshot chance at victory, despite knowing that that might mean the end of MAGA? That would be of a piece with his refusal to stick to an economic message on the stump that really might improve his chances at winning: He seems less interested in doing whatever it takes to win than his fans are.