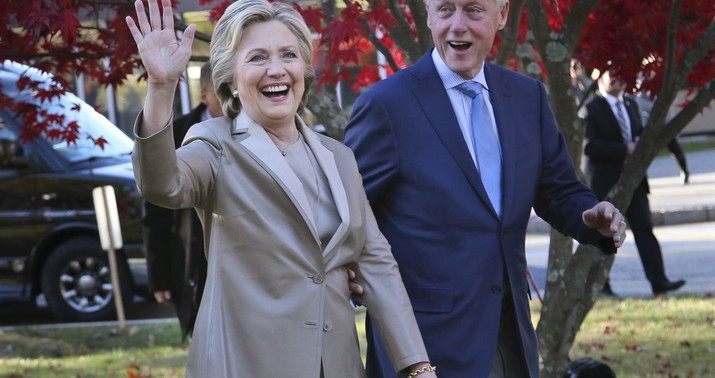 Only a total moron could believe there’s a chance of this happening.

I give you Exhibit A:

What a great birthday gift it will be next year for @HillaryClinton when she is one of the three new Supreme Court justices appointed through the Judiciary Reform Act of 2021. Thanks for the idea, guys. Only your colleagues’ thuggish behavior made it possible.#ReformTheCourt https://t.co/9Ae4PVnH1Q

Morning Joe has no excuse for entertaining such silliness, no matter how much it might tickle him to imagine Biden owning the cons that way. Democrats won’t waste a SCOTUS appointment on a 73-year-old, whether in a Court-packing scenario or otherwise. The left has been so traumatized by the trifecta of losing the chance to replace Scalia, seeing Kavanaugh confirmed despite Christine Blasey Ford’s testimony, and watching the Ginsburg seat slip from their grasp two months out from an election that they’ll insist their next picks be as vacancy-proof as possible. They’ll put some 25-year-old communist on the Court and not have to worry about the seat again for 50 years.

It’s more understandable that the head of the RNC would be pushing this line. As stupid as it is, it’s solid red-meat material for a Republican rally:

Well, this is a new one. RNC Chair Ronna McDaniel just warned a crowd at Trump's Lansing, Michigan rally that Biden will pack the court AND nominate @HillaryClinton to the Supreme Court.

I’m surprised that our president, who’s very much not discerning about the quality of the information he passes along to the public, didn’t seize on the possibility of a Justice Hillary long ago in his attacks on Biden. Even though it’s nonsense, it would have been fun watching Biden cornered into pissing off Clinton fans by having to deny it. “I’m not appointing Hillary Clinton to anything, doggone it!”

Mainly, though, it would give Trump a chance to run against a deeply disliked Democrat again. That’s been his problem all along with Biden: His talent is stoking fear and loathing of his enemies and Sleepy Joe isn’t menacing enough to give him good traction. Even Trump’s big last-second hit on him, that his son is a pitiful crackhead trading on his dad’s name, is more tragic than infuriating. In hindsight, I’m surprised he and his team didn’t work harder to try to make Biden a proxy for Obama and/or Clinton instead of a proxy for Hunter Biden and/or socialism. If you’re not going to spend your time comparing your policy successes to your opponent’s policy failures, which is what Trump should have done all along, at least make him a stand-in for Democrats whom righties deeply despise. Ronna McDaniel’s got the right idea with the “Justice Hillary” thing. It’s just a wee bit late.

But no, needless to say, Biden’s not handing a SCOTUS seat to a septuagenarian. What he needs is someone who’s a bit younger, legally trained, and of sufficient renown in his party that putting that person on the Court might so excite Democrats that they end up deciding to drop the Court-packing nonsense and relish their new justice instead. If only there were someone in the party who fit that descrip– hey, wait a minute.

Obama: “With everything that’s happening, you know what [Trump] brought up? He was fussing about the crowd size at the inauguration again, saying his was bigger. Who’s thinking about that right now?… he’s jealous of Covid’s media coverage… he’s turned the WH into a hot zone.” pic.twitter.com/vThmznpHwl

Nah, he’d never take the job. He has important climate-change documentaries to produce on Netflix or whatever.

See what he did there? @redsteeze gives props to WaPo for this 'undeniably true headline' about Joe Biden's admin (but there's a catch)