Biden inching ahead in Iowa? Update: By three? 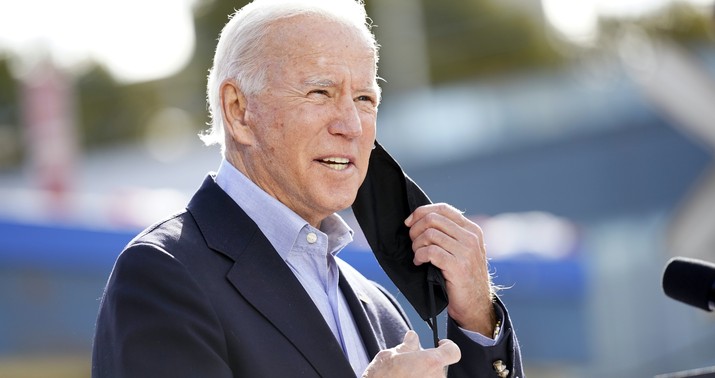 Iowa polls are worth extra attention over the final 13 days because of how easily Trump won there four years ago. The state went blue for Obama by nearly six points in 2012 but in 2016 Trump crushed it, winning by nearly 10. If there’s to be a late trend nationally back towards him in the final stage of the race, we’d expect to see it start showing up in a state that broke strongly for him before. All Trump voters there need to do is come home.

There’ll be two polls of Iowa today, with one coming later this afternoon from the Times. Monmouth’s is already out, though, and it doesn’t show a trend towards Trump. Just the opposite:

Biden pulls ahead, though, when different likely voter models+ are applied. A model based on a relatively high level of turnout puts the race at 50% Biden and 47% Trump, while a model reflecting lower turnout produces an even wider 51% to 46% result. Trump led by 3 points among likely voters in Monmouth’s poll last month.

Biden’s lead is wider in the lower turnout scenario because of the large number of Democratic ballots that have already been cast. Over one-third (37%) of registered voters say they have already returned their ballots. The overwhelming majority of these votes have gone to Biden (71%) rather than Trump (28%). If turnout ends up being low at this point, it would be due mainly to Republican-leaning Election Day voters deciding to stay home.

Trump’s lead among registered voters has shrunk and Dems are banking votes early. Other polls also give ample reason to believe the state is competitive: Of the four this month tracked by RCP, two have been tied and Biden’s led in the other two. FiveThirtyEight has tracked a few polls that are more promising for Trump, including one that had him up six points a week ago and another that had him up by high single digits earlier this month. But the more recent polls have showed a closer race. Trump is only slightly favored to win there in FiveThirtyEight’s model at the moment. That’s not what the campaign wants to see in a 2016 gimme.

As for how Biden’s doing it, Monmouth says it’s simple: Seniors. He’s gone from a four-point lead in that group last month to an 11-point lead now. Iowans overall give Biden a 10-point advantage when asked whom they’d prefer to handle the pandemic but seniors prefer him by 23 points. If the Democrat really does win the 65+ group this year, the degree to which Trump’s COVID messaging alienated older Americans will be a major theme of the post-mortem.

We’ll see what the Times poll has to say. It’s counterintuitive for a Democratic candidate to *gain* ground in likely-voter models; typically Republicans improve when pollsters move from a screen of registered voters to likely voters. But maybe Democratic turnout is for real this year.

Speaking of which, Change Research has a fascinating detail in its new national poll:

It is hard to understate enthusiasm for voting this year. A massive 92% of battleground voters and 91% of voters nationally report they are ‘extremely motivated to vote’ in the election, giving a 10 on a 0 to 10 scale. Most of the voters who have already voted are the most highly motivated: 95% of those who have already voted in the battleground are ‘extremely motivated’ while 90% of those who have not yet voted are 10s. A large minority of our respondents report having already voted. Nationally, 53% of Biden voters report having voted already compared to just 25% of Trump voters.

Trump’s base strategy is not giving him the enthusiasm advantage he would hope to see considering he trails in the polls. The hope is that there are more highly motivated Trump voters who will be sure to turn out on Election Day and that some of those weaker Biden voters will stay home. But 93% of battleground Biden voters are ‘extremely motivated’ compared to the 94% of Trump voters. If you filter the ballot to only those who are 10s in motivation, Trump only picks up 1 point in the ballot across the battleground.

The polls may be lowballing Trump by underestimating his turnout, but if Change is right then his turnout advantage won’t be as great as the GOP is hoping. (Change has Biden ahead in all six major battlegrounds, including by five points in Florida.) I think their numbers on how many Biden supporters have already voted must be off, though, and possibly off considerably. As of yesterday, some 35 million early and mail votes had been cast nationally, a big number by traditional standards. We can conservatively estimate that each candidate will get more than 60 million votes total this year. Even if we assume that early votes have broken heavily for Biden, at a 75/25 clip, it would mean that he’s banked “only” 26 million votes so far. If that represents 53 percent of his total vote share — as Change’s polling implies — then he’d be headed towards a total of only 50 million votes or so. He’ll do much better than that even in the most optimistic Trump scenarios.

But again, we needn’t obsess about the actual numbers. What we’re looking for is trends, both in Iowa and nationally. Is Iowa starting to turn red again as the campaign closes, as we would expect if Trump were mounting a comeback? No. Are Democrats banking *lots* of votes early, such that (a) they won’t have to reckon as much as Republicans will with the threat from COVID on November 3 and (b) we’re more likely to know on election night who actually won the presidency since Dems aren’t waiting until the last minute to send in their mail ballots? Yes. Stay tuned for the NYT poll later this afternoon.

Update: Here’s that Times poll of Iowa, as promised. Biden 46, Trump 43. The good news is that there are still a fair number of undecideds there capable of breaking for Trump. The bad news is that a guy who was +10 four years ago should not be -3 now, 13 days out from the vote.