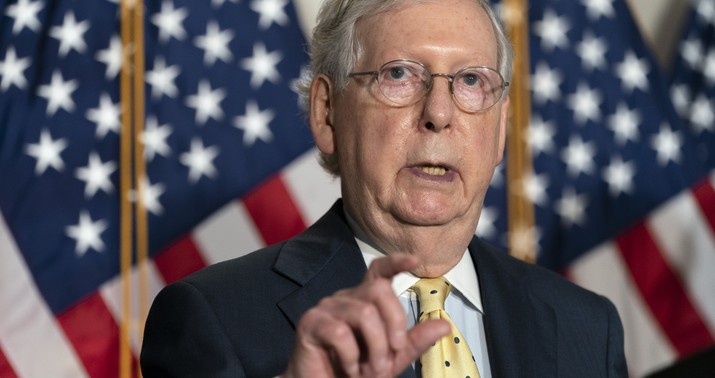 Five days ago he announced that he wouldn’t hold a vote on a deal between the White House and Democrats. The price tag, in the ballpark of $1.8 trillion, was too high for his caucus. It was a nonstarter.

Today he’s telling reporters that, sure, they’ll look at it. How come? What changed?

McConnell on Senate considering a possible COVID-19 relief deal: "If a Presidentially-supported bill clears the House, at some point we'll bring to the floor, yes."

McConnell confirmed he would put on the Senate floor any deal reached between Pelosi and administration on the stimulus. But he would NOT say when I asked if he was comfortable with a price tag around $1.8T or $2T-plus as Trump is pushing. He said Senate would “consider” a deal

Theory one: Today is Pelosi’s deadline for a deal, with she and Steve Mnuchin holding final talks to see if they can get something done. Maybe McConnell’s been given a heads-up by the White House that the two sides are still too far apart and there’s likely to be no deal, in which case he’s now free to position his caucus as perfectly open-minded about a big stimulus for PR purposes. “Sure, sure, of course we’re willing to consider a $2 trillion package. Just as soon as Pelosi agrees to it.” It’d be a costless bit of spin — if in fact talks are about to collapse and Pelosi’s serious about her deadline.

Theory two: Maybe Trump threatened McConnell and his caucus behind the scenes. The president has less sway over Senate Republicans today than he’s had in the past thanks to his weak polling against Biden, but he’s not without leverage. He showed over the weekend that he’s willing to make an example of critics like Ben Sasse, which must have sent a shiver through Sasse’s colleagues knowing that Trump will retain influence over the GOP base next year regardless of what happens next month. Getting a stimulus deal has become an urgent and understandable — and *very* belated — pre-election priority for Trump. Conceivably he warned Cocaine Mitch that if he doesn’t back him up on a bill, he’ll start calling out Senate Republicans by name for not working harder to get it passed. Which could be ruinous to incumbents like Joni Ernst and Susan Collins in tight races.

Part of the shift away from Mr. Trump on the economy may stem from voters’ urgent hunger for new relief spending from the federal government — which Mr. Trump has nominally endorsed but which he has not sought actively to extract from congressional Republicans.

Seven in 10 voters, including more than half of Republicans, said they wanted to see a new multitrillion-dollar stimulus program that includes government support for citizens and emergency help for state and local governments. There is also widespread public support for a $2 trillion renewable energy and infrastructure package that Mr. Biden has proposed as a form of economic stimulus.

Out of eight policy proposals polled by the Times, including a public option for ObamaCare and a national mask mandate, the most popular one was a new coronavirus stimulus. The public split 72/21 in favor overall; not a single demographic group opposed the idea, with even Republicans supporting it at a 56 percent clip. Fiscal conservatives like Ron Johnson have been running around pretending like it’s 2010 and that their base is still a group of angry government-shrinking tea partiers: “A massive bill is a base killer,” he told the WSJ recently. “At some point in time, people will wonder: why are we voting for Republicans?…Or why vote at all?” Imagine pushing horsesh*t like that knowing (1) the public overwhelmingly supports a big stimulus, (2) Republican voters also support a big stimulus, (3) Trump walloped a field of 15 small-government conservatives in the 2016 primary by not bothering with tea-party dogma, and (4) Trump, who’s now pushing a big stimulus, has near-universal support among Republicans right now ahead of Election Day.

If Senate Republicans want to posture as deficit hawks again in preparation for a Biden presidency, despite having revealed themselves to be utter frauds on that subject over the past four years, that’s one thing. But putting it off on Republican voters by fretting about some imaginary revolt of the base is an insult to one’s intelligence. You want to vote no on the stimulus? Go ahead — but own your vote. Don’t tell Republicans that you’re only doing what they want you to do. You aren’t.

How about this poll? The economy was Trump’s strongest issue as president, even after the pandemic started. Then the stimulus money started to run out:

To my amazement, with the economy teetering and Trump’s presidency hanging by a thread, John Thune told reporters yesterday that he’s doubtful they could find even 13 Republican votes in the Senate for a compromise bill supported by both Trump and Pelosi. That’s less than a quarter of the caucus. That’s all they’d need to pass it with all Democrats voting yes. But the votes aren’t there, Thune claims:

Republicans’ “natural instinct, depending on how big it is, and what’s in it, is probably going to be to be against it,” said Senate Majority Whip John Thune (R-S.D.). “I think we’re going to have a hard time finding 13 votes for anything.”…

Some GOP senators have also warned it would damper enthusiasm for Republicans at the ballot box, while Sen. Ron Johnson (R-Wis.) simply said Monday that $1.8 trillion or more is “way too high.”

“It would divide Republicans if it’s anything like the kind of contours we hear about,” said Sen. Pat Toomey (R-Pa.), a fiscal conservative.

If they can’t get 13 votes, they’re not fit to govern. That’s not a “Never Trump” view — Trump’s actually trying to get this done! — it’s a simple reflection of the fact that Republicans aren’t taking seriously the magnitude of the economic crisis that’s descending. They weren’t serious about cutting spending before COVID arrived, when they had an opportunity to do so (especially during 2017-18), and they’re not serious now about averting an economic catastrophe that’ll unfurl this winter if they don’t act. They were too timid about standing up to Trump on the size of government before and they’re too aggressive about it now. Their instincts are simply terrible. And their priorities, placing their ideological “branding” above what the moment calls for in terms of governance, are appalling. They deserve to lose the Senate. Let Lindsey Graham spend the next six years clucking disingenuously about spending as a Fox News contributor.

I’ll leave you with this comment from a few days ago, just to illustrate the degree of insulting nonsense that’s being fed to Trump right now. On the one hand, people like Johnson are lying to him in insisting that Republican voters will be unhappy if there’s a big new stimulus. On the other hand, supply-siders like Kudlow are assuring him that many laid-off Americans will be okay because they’re finally getting to work for themselves or whatever. It’s amazing that Trump’s instincts from 2016 are still well enough intact to encourage him to ignore both and push for a big deal with Pelosi regardless.

White House's Larry Kudlow today with a line new to me: "The talk is that a lot of folks who became unemployed, most regrettably, they're sticking with it & going out and starting new businesses. … That's the great part of American capitalism — gales of creative destruction"

Update: This would be understandable if Trump were up big in the polls and Senate Republicans were about to build on their majority:

NEW: @senatemajldr McConnell told his members in a closed door lunch that he told the White House not to agree to a COVID deal with Speaker Pelosi ahead of the election, according to three sources familiar

Under those circumstances, McConnell might reason that the GOP’s leverage over a deal with Pelosi was about to get much stronger two weeks from now. In reality, it’s probably going to get weaker, which almost certainly means there’ll be no deal during the lame duck. It’s inexcusable. They deserve to lose.

Six Holiday Gift Ideas For The Gun Owner In Your Life