Romney: The world is watching our hate-filled political morass with abject horror 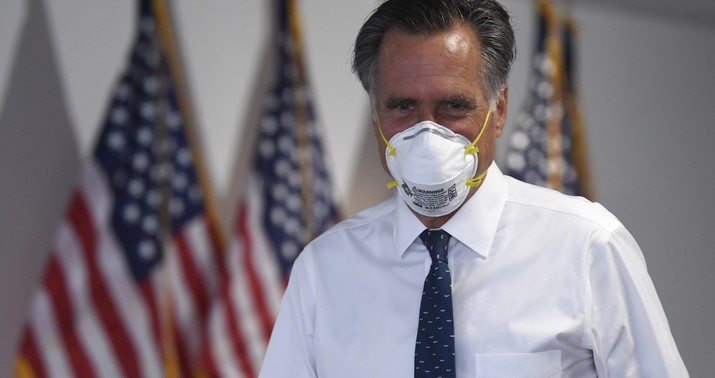 Even for Romney, this is awfully Romney.

And oddly timed. A warning about the wages of bitter partisan rhetoric would have made more sense last week, after news broke of the kidnapping plot against Gretchen Whitmer. Why’d he save it until today?

He’s getting creamed for it by both sides on social media in the hours since it was published (for different reasons, of course) but there may be a common thread to the backlash. In an age of toxic cynicism and partisan ruthlessness, neither right nor left knows how to react to an earnest appeal for a more civil politics. It’s almost unfathomable that a politician could mean it sincerely; to the extent that he does, the impulse is to sneer at him for being so naive or “soft” and to search for an ulterior motive as to why he published it. If one can’t be found, he’s attacked anyway for some other discrediting sin, like hypocrisy. Or “both sides-ism,” which is the left’s big problem with this statement.

I’m not immune to wondering if he had an ulterior motive. I think he does.

Republicans on social media are annoyed at him for seizing a new opportunity to take shots at Trump, and more generally for the sanctimonious choirboy image he continues to cultivate. Few things are more disdained in the Trump era than “Boy Scouts” in government, as Paul Ryan could tell you. Democrats are annoyed at him because he insisted on presenting the president’s rhetoric as no more troubling or notable than, say, a failed sportscaster’s. If this really is a “both sides” problem, Romney should be able to cite more prominent examples on the left than Keith Olbermann, a man who can’t even get a TV gig anymore.

And you’re his enabler.

And if you don’t like the state of politics, fix the root causes – your party, and @realDonaldTrump.

If not, go read up on Franz von Papen. https://t.co/S2WFDPfQtb

The ONE time somebody besides me exaggerates my worth and you have to go and spoil it, Tommy! https://t.co/iM2IOpNFIK

If becoming the first senator in U.S. history to vote to remove a president from his own party isn’t enough to spare him from an analogy to von Papen, maybe Romney has a point about America’s partisan rhetoric running a little too hot.

In fact, there’s really no “maybe” about it:

Over the course of three years, the number of Americans who say that they feel justified in using violence to achieve their political goals has gone up from 8 percent to over 33 percent. pic.twitter.com/JBg3Y83ASK

What’s Romney’s ulterior motive, then? I think it’s this: The statement above is the closest he’s willing to get to actually endorsing Joe Biden. He won’t let himself do that formally, I suspect, partly because he’s already made political trouble for himself in Utah on the impeachment vote and partly because he may be enough of a “party man” that he won’t cross his network of Trump-supporting friends and donors even if he disagrees with their choice. But the most notable line in the statement is the explicit exception made for Biden — “their presidential nominee refuses to stoop as low as others.” If Romney had wanted to do a true “both sides” act here, he could have reached back for Biden calling Trump a “clown” at the debate, for instance. Instead, he made a point of saying that Biden typically *isn’t* guilty of the viciousness displayed by Trump (and Pelosi, and Olbermann).

That doesn’t equate to Romney saying he’ll vote for Sleepy Joe but it does suggest that he thinks Biden is the better choice among the two. If acidic partisan acrimony is eroding the country’s civic culture and if one candidate is contributing to that much more aggressively than the other, then logically it’s obvious who would be better for America as president. The references to Pelosi and Olbermann are really just political cover for Romney’s right flank, so that he can’t be accused of singling Trump out.

Which may also explain the timing. If he had put this statement out days ago, in the thick of the coverage of the Whitmer plot, it would have seemed more clearly aimed at Trump than it does today. Whitmer herself was making that argument at the time, that Trump had contributed to demonizing her in some of his language about her and Michigan’s lockdown. Romney’s statement would have been read as amplifying that claim had it been issued simultaneously. By waiting a few days, he gets to say more plausibly that he’s criticizing overheated language on all sides, not just the president’s. But the Biden line gives the game away.

'Way to stand up for press freedom'! Proud journalist Jake Tapper is 'just suggesting' that the NY Post bend the knee to Twitter

Pollster: Let's Face It, Trump's Path to Victory Is Narrow, But Real