Biden allies wonder: Should he skip the last debate with Trump? 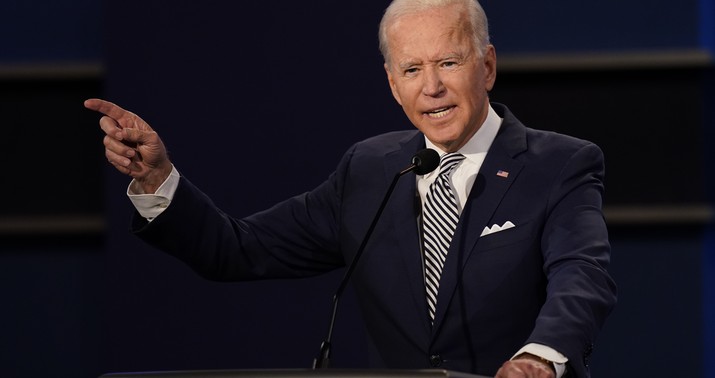 A bona fide strategic dilemma. Before the second debate was canceled, I was inclined to say that Biden should do all three. That’s the only way he can settle the doubts about whether he’s up to the job mentally. Get in the ring with Trump, try not to do any needless damage to yourself, and trust that the president isn’t a nimble enough debater to do any real damage to you.

But the shift in the polls towards Biden after Trump’s performance at the first debate and his COVID diagnosis a few days later arguably changes the game. With Americans moving towards Biden and the clock running down, why on earth would Sleepy Joe run another play and give Trump a chance, however unlikely, to force a turnover? If there were still lingering doubts about Biden’s mental fitness, presumably his national lead wouldn’t be expanding right now. It’d be frozen, contingent upon another one or two solid debate performances. Maybe Biden convinced Americans of his fitness at the first debate. And if not, it’s not like he’ll be completely out of the public eye in the next few weeks. He’s doing a 90-minute town hall with voters on ABC on Thursday night in lieu of the debate and doubtless will hold some other event at which he’ll take questions if he backs out of the third debate on October 22.

There’s only one intriguing argument in favor of Biden taking Trump on again. Namely, the president could do himself further damage, compounding the self-sabotage at the first debate. If you think there’s a greater chance of Trump screwing up than Biden screwing up — and there probably is — then it makes sense for Biden to do it.

But it’s a big risk. It’s possible that Trump will absorb the criticism of his constant interruptions at the first debate and change his approach, allowing Biden to talk himself into trouble this time on subjects like Court-packing. Trump is capable of scoring points. And if he does, Democrats will find themselves in the grip of the same anxiety over an eleventh-hour gamechanger that they felt in 2016. Four years ago it was Comey’s letter reopening the Emailgate probe that helped convince undecideds to back Trump. This year it could be a strong performance by Trump or a weak performance by Biden at the third — unnecessary — debate that does it.

“Joe should spike the football, consider the debates won, and just do a town hall to show that he, unlike Trump, knows how to relate to the concerns of everyday Americans,” the confidant said.

But others—including the Biden campaign itself—see a potential repeat of Trump’s disastrous performance in the first presidential debate as too tempting a possibility to ignore.

“The key is for him to be seen and heard. The best offense is a good offense,” said John Morgan, a longtime Biden supporter and one of his top fundraisers in Florida. “Sitting on leads usually backfires. The more people see Joe and compare and contrast the better—the Russian spin that he has lost his pep and step is knocked down with every appearance.”

“It’s 1.5 hours of time to essentially do what the press has been wanting from him—to answer questions,” said another Biden fundraiser of the town hall format, who, like the former Senate staffer, once felt that the debates would be a sideshow not worth the effort. “I like that he shows up and maintains his commitments. This is a perfect scenario for what I know he’s most capable of doing right now and allows him some retail politicking, which he’s best at.”

There’s another consideration. Voters don’t like it when candidates back out of debates:

An NYT poll of Wisconsin found 70 percent thought Trump should have done the second debate as a virtual event versus 21 percent who said he shouldn’t have. Biden wouldn’t want to risk a similar backlash by backing out of the third one. Besides, if Trump’s willing to show up on October 22, what would Biden’s excuse be for refusing? “He was a jerk at the first debate”? In that case, why was he prepared to do the second debate until Trump backed out?

His campaign chairman was asked two days ago whether Biden intends to be there. Yep, said Cedric Richmond:

Rep. Cedric Richmond, co-chair of the Biden campaign, says Joe Biden will participate in the Oct. 22 presidential debate in person if “Donald Trump is COVID-free” and the safety guidelines protect the health of everyone who attends the debate. https://t.co/Hcs1jrZbE6 pic.twitter.com/AG8rSvf4mF

Maybe the format of the event will end up being Biden’s excuse for backing out. The second, now-canceled debate was supposed to be a townhall involving voters in Miami. The third debate is scheduled to be a traditional one-on-one. Biden wants that changed to a townhall since (a) Trump will be less likely to interrupt in front of actual voters and (b) Biden gets to show off his capacity for empathy, which happens to be Trump’s core weakness. If Trump agrees to a townhall format, maybe then it’s worth doing for Biden. If Trump refuses, Biden could pull the plug, insisting that America must hear from actual Americans, not just two candidates jabbering at each other.

I’m guessing that’s the position Team Joe will settle on: Townhall debate on the 22nd or bust. If Trump doesn’t want to accept those terms and ends up forfeiting his last best chance to shake up the race, fine by them. There’s even a nonzero chance that Trump will preemptively decide not to do the third debate, for no particular or obvious reason. He doesn’t think strategically, he has impulses. And his impulse may be to back out purely and simply because he doesn’t want to give Biden the chance to look “stronger” by being first among the two of them to blow off the event.

The president is also planning a townhall for this coming Thursday night, by the way, with NBC in the mix of possible networks to host it. It would air head to head with Biden’s townhall and would almost certainly draw bigger ratings, although nothing on the order of what a true debate would draw. Here’s Elizabeth Warren taunting Trump yesterday.