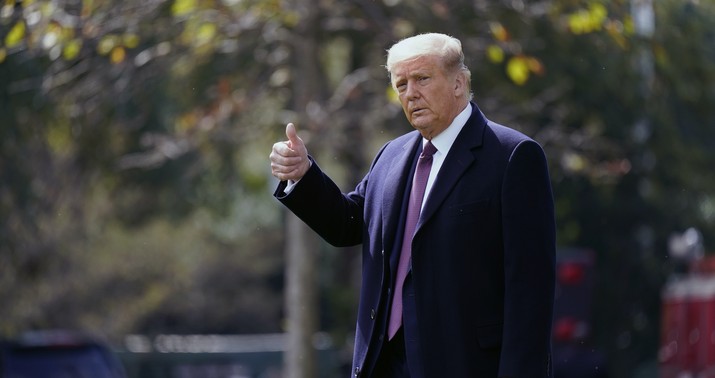 This is obviously good policy and good politics but that was also true in June, when this deal could have and should have been done. And it was certainly true three days ago when Trump announced that he was done negotiating until after the election, to the mystification of everyone.

Someone appears to have finally convinced him over the past 72 hours, very belatedly, that a deal would be the best thing he can do for struggling Americans and therefore the best thing he can do to boost his reelection chances. His decision on Tuesday to leave the bargaining table will inevitably be spun today as a genius leverage move — except that he doesn’t have leverage. For electoral reasons, Pelosi would doubtless love to have no deal by Election Day; and because Senate Republicans are (bizarrely) reluctant to approve a big package before November 3, Trump may still have no choice but to try to negotiate her downward. That means Dems can continue to reject every White House offer on grounds that it’s not “generous” enough to the American people.

As such, pushing publicly for a big deal is probably the best PR move Trump can make at this point. If he can convince voters that he wants to be as “generous” as Pelosi does, that’ll complicate the blame equation between them if there’s no agreement.

Within a day of tweeting that he was calling off bipartisan talks for a coronavirus stimulus deal, President Trump phoned House Minority Leader Kevin McCarthy and indicated he was worried by the stock market reaction and wanted a “big deal” with Speaker Nancy Pelosi, per two sources familiar with the call.

What we’re hearing: Trump was spooked after seeing the instant drop in the stock market and intense backlash to his tweet, and he has since directed Treasury Secretary Steven Mnuchin to push for a more comprehensive relief bill before the election…

Few people on Capitol Hill thought a large-scale stimulus deal would be reached before Election Day, and it’s still very unlikely both sides can compromise by then. However, Republicans did not expect Trump to be the one to walk away from the table, and they were even more stunned he did so in such a public way.

Washington leaders were even more baffled when, shortly after Trump said he wanted his team to abandon negotiations, he contradicted himself by responding to a headline citing Federal Reserve chair Jerome Powell calling for more fiscal stimulus and saying Congress has a low risk of “overdoing it.” Trump’s response: “True!”

A source who spoke to him yesterday told Axios they “got the strong impression that Trump realized he had messed up tactically” by pulling the plug on negotiations. It is … troubling that it took a stock-market dive plus various people on his own side shouting “What the hell are you doing?” to convince him that ending stimulus talks and publicly taking responsibility for it wasn’t a shrewd move. It perhaps also wasn’t shrewd of him to take a dig at Pelosi’s looks on Twitter this week if he was still interested in reaching a deal with her. “[T]he ol’ ‘publicly break off talks, attack your negotiating partner with personal slurs, then come racing back to the table desperate for an agreement’ play,” says NYT reporter Alex Burns, summing up the “strategy” of the past few days.

Populist media is awash in conspiracy theories as we approach Election Day but here’s one that hasn’t gotten nearly enough attention even though it’s easily the theory that’s most likely to be true. Do Senate Republicans want Trump to lose? If not, what’s the explanation for denying him the one policy victory left on the table that might give him a fighting chance on Election Day?

Pelosi’s probably not his main obstacle to getting a deal done — although, uh, the fact that she’s holding a press conference today about the 25th Amendment implies that she’s not enthusiastic about it either. His main obstacle is getting to 60 in the Senate for a big stimulus package when Republicans there have been reluctant to approve even a skinny one. Are there really not 13 GOPers in the chamber still sufficiently loyal to, or cowed by, Trump to rubber-stamp this for him?

Is he so weak right now politically, trailing by upwards of 10 points in the polls with less than a month to Election Day, that the Ted Cruzes and Ben Sasses of the world would rather pre-position themselves as the fiscally conservative opposition to President Biden than give Trump one last chance to win?

Maybe he needs to go nuclear, highlighting their unwillingness to approve a deal during his upcoming rallies. He can still do plenty of damage as an ex-president to 2024 presidential aspirants in the Senate by blaming them preemptively if he ends up losing to Biden. Cruz, Josh Hawley, Tom Cotton, and others would be reluctant to cross him if they thought GOP primary voters might hold a grudge. But even if they stood fast, surely there are still enough members of the party’s centrist and Trump-sycophantic wings to hand him 13 votes to go along with 47 from the Dems. Probably every Senate Republican on the ballot this fall would go along, as would retirees like Lamar Alexander and Pat Roberts.

Is Trump afraid to muscle them publicly because he thinks they might resist anyway, proving that his influence over the party has already begun to fade? He’d be underestimating his own strength in that case, which isn’t like him.

In lieu of an exit question, read this Slate piece arguing that Pelosi should take the White House’s offer of $1.6 trillion in stimulus. Yes, it’s smaller than Democrats want, and yes, it’ll help Trump out politically, but leaving millions of laid-off Americans to figure out a way to pay rent for four months until Biden is sworn in is too grim an alternative. Trump should come up a little, she should come down, and then he can twist Senate Republicans’ arms in the final few weeks to rubber-stamp it. Even if they refuse, he’ll have proved to voters that he was willing to try.

Update: I’m 90 percent convinced that Pelosi’s dumb 25th Amendment stunt today was done for the purpose of pissing Trump off in the expectation that that’ll make him quit stimulus talks again.

Crazy Nancy Pelosi is looking at the 25th Amendment in order to replace Joe Biden with Kamala Harris. The Dems want that to happen fast because Sleepy Joe is out of it!!!

Update: Here he is confirming the reports that he’s decided to “go big” 25 days from the election. His problem, again, is Cruz and fiscal cons more so than Pelosi.

Pollster: Let's Face It, Trump's Path to Victory Is Narrow, But Real