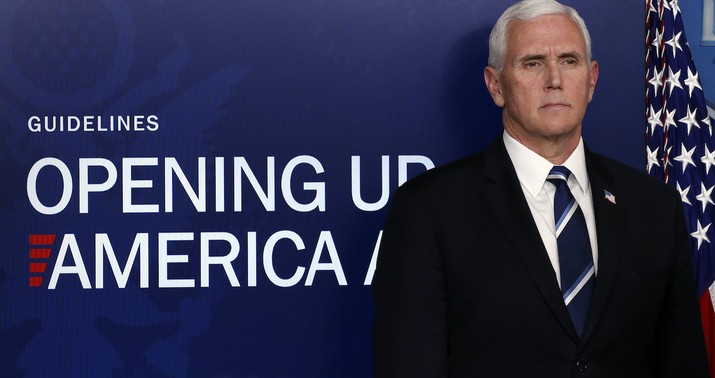 Sounds like the veep is all-in on Trump’s election-winning message that you’re a pussy if you’re worried about COVID.

I feel like that one’s going to play very strongly and powerfully with the septuagenarian crowd in Florida.

Imagine gift-wrapping a talking point for your opponents in the home stretch of a national election that only one party on the ballot is doing everything possible to take precautions against infection by a killer plague. Meghan McCain’s right: Between Trump’s sudden bizarre bravado about the virus and his inexplicable decision to give up on stimulus negotiations, this is starting to feel like a “kamikaze” mission.

Except that kamikaze operations are aimed at damaging the enemy and none of this is doing damage to Democrats. The group being damaged in both cases is … American voters.

Vice President Pence is requesting that no plexiglass dividers be placed on his side of the stage at Wednesday night’s vice-presidential debate, after an announcement Monday by the Commission on Presidential Debates that dividers had been agreed to as a safety measure to prevent the spread of the coronavirus.

Marc Short, the vice president’s chief of staff, said the vice president’s team does not view plexiglass dividers as medically necessary, given other safety measures at the debate, including a 12-foot distance between Pence and Sen. Kamala D. Harris (D-Calif.) and daily testing of both candidates.

The commission and the Biden campaign both said Tuesday they understood that the Pence team was in agreement with the notion of plexiglass barriers. But the Pence team suggested they did not want any such dividers around the vice president, regardless of what Harris does.

“If she wants it, she’s more than welcome to surround herself with plexiglass if that makes her feel more comfortable,” Short said. “It’s not needed.”

Literally just yesterday, the CDC announced that airborne viral particles can travel more than six feet indoors. The entire moral of the story of the still-spreading outbreak at the White House is that no *single* precaution, such as daily testing, is foolproof. For maximum protection against the virus, you employ all available strategies — testing, distance, masks. If Team Pence is hellbent on criticizing Harris, they should criticize her for believing that plexiglass might be an effective barrier against a virus that’s adrift on air currents onstage. Plexiglass feels more like a stage prop; the precautions taken by both sides should be more rigorous than that.

But “we need to be safer” contradicts the Trumpist line so they’re actually going to hand this issue to Harris on a silver platter. If I were her, I’d be thrilled for the viewing audience to see a barrier next to her but none next to Pence. At a moment when the president is sick and the virus is spreading through the White House, the next-in-line is going to sit there in full view of 40 million people or whatever and not do everything he can to protect himself and everyone around him?

Bananas. Here’s what Pence should be demanding, at a minimum:

Plenty of distance and an outdoor setting would be more responsible. Or, of course, they could do a remote debate, with the candidates in different rooms. I don’t see the strategic benefit in resisting any proposed precaution but it must boil down to one of three things. One: The Trump campaign is so eager to project “normalcy” amid the pandemic that it’s going to continue to do so even at one of the most freakishly abnormal moments in the history of American politics. Two: The Trump campaign is simply following the boss’s lead on this strange and self-defeating idea he’s pushing that America must dominate the virus rather than let itself be dominated. Which, viewed through the lens of the outbreak at the White House, amounts to saying that negligence equals “strength.” Not a winning message. Or three: We’ve reached a stage of such mind-bending hyperpolarization in our political culture that the fact that Democrats are insisting upon extra precautions onstage obliges Pence and the Trump campaign to resist those precautions for … no reason, really. Just to be on the other side of the issue. Alongside a deadly virus.

Don’t worry, though. I’m sure it’ll all work out. New from the Boston Herald:

In two days of polling before Trump got COVID, the president trailed Biden by just a 46-41% margin. In the three days of polling after the coronavirus diagnosis, Biden held a 55-34% lead. That means Biden’s lead grew by a whopping 16 points from pre-COVID to post-COVID…

Biden is holding a 12-point lead among independent voters — a key to the election in battleground states. The former vice president also holds a massive 58-31% lead among women voters. Male voters are evenly split between Trump and Biden, the poll shows…

The poll also showed that COVID-19 is far and away the top issue in the campaign. One third of all likely voters cite the coronavirus as the most important issue to them, while 19% went with jobs and the economy and 10% cited social justice and racial equality.

Biden’s not going to win by anything approaching 21 points, but there’s other evidence out there today that Trump’s COVID diagnosis and his response to it are increasing rather than decreasing the Democrat’s lead. A Survey USA poll that was in the field when Trump announced he tested positive found Biden leading by eight before the announcement was made. After Trump was taken to Walter Reed on Saturday, that lead had grown to 16. There are a *lot* of polls suddenly indicating that Biden’s national lead is now double digits. That doesn’t mean it’ll stay that way — a good debate on the 15th could restore some confidence in Trump — but it means the hole the president’s trying to climb out of is getting deeper, not shallower as we approach Election Day.

Having same conversations with folks who would planned to vote for him. https://t.co/cBb25lHZNT

"It's incredibly selfish of older people or neurotic people who are timid & afraid & won't come out of their basements to confine children & young people to miss out on the most important part of their lives" – Fox News is now straight up blaming old & vulnerable people for Covid pic.twitter.com/mLhiwDHmrN