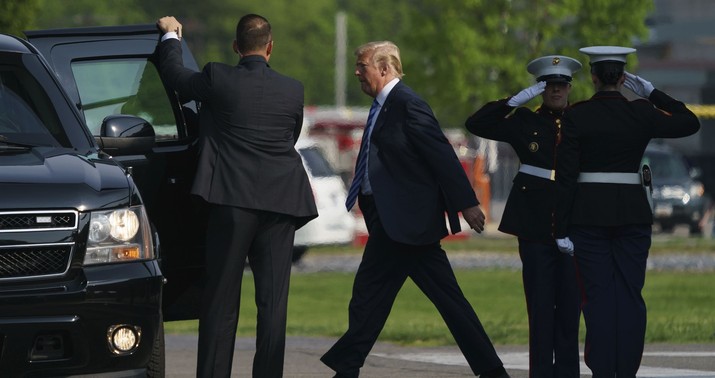 Officials are telling WaPo that he’s not seriously ill. It may be that they simply want a battery of doctors around him in case his condition takes a sudden turn, which is a notorious feature of the disease in some patients. They can deteriorate quickly.

Boris Johnson was very sick when he went to the hospital after getting COVID but as I recall he never quite reached the ICU stage. So maybe this really is just precautionary.

But Nate Silver remembers that Johnson’s hospitalization was also described as “precautionary” initially, which turned out not to be true. And there’s some circumstantial evidence floating around that Trump’s case may not be “mild,” even if it’s not quite “severe” either.

The visit is “out of an abundance of caution,” the official said, adding that the president may remain there for several days.

Trump spent Friday working and making calls from his residence, and plans to continue working from the hospital, the official said. Walter Reed has an executive office suite set up for this very purpose, including both a residence and an office space, the official said. The official stressed that Trump is not seriously ill, but because of his age, as well as other risk factors, he and aides decided to take this additional step.

Initially word was that he was going to the hospital for “tests,” but tests wouldn’t require a multi-day stay.

The circumstantial evidence of a serious illness that I mentioned is this memo from the White House doctor. Would the most powerful man in the world really be given an experimental treatment if his symptoms were mild?

No hydroxychloroquine in the mix there, interestingly. The experimental drug, Regeneron’s antibody cocktail, was profiled a few days ago at CNBC. Data from a small trial showed that it “reduced viral levels and improved symptoms in non-hospitalized patients with mild-to-moderate Covid19.” There were serious side effects in only two of 275 patients. You can understand why they might have thought it was safe to dose it out to him. The upside outweighs the downside.

Or does it? Some doctors are raising an eyebrow. Dr. Zeke Emanuel (Rahm’s brother) warned, “You do not give a patient — much less the President of the United States — a drug that is not yet approved by the FDA (to say nothing of one with ‘mild symptoms’). Unsurprisingly, the Trump WH is not being forthright to the American people about the health of their President.” Dr. Jeremy Faust recorded the short audio file below registering his own objections. His point is simple: Experimental treatments are typically reserved for desperate situations. You wouldn’t play dice with the health of the president if he’s only suffering minor symptoms, as one would assume he’s capable of fighting off a minor infection on his own.

You only treat the president as a guinea pig if the situation is urgent:

Voice memo to you all. pic.twitter.com/fmVqK1WO48

One other thing. Trump hates to project weakness, especially physical weakness. Remember the mystery trip to Walter Reed last year? To this day, ludicrously, he continues to insist that he made that unannounced visit to the hospital to complete part one of his annual physical even though that could have been done at the White House. He doesn’t like people to see him as vulnerable in any way. For him to agree today to make a spectacle of himself being flown to Walter Reed for medical care — for the “China virus,” of all things — he must really need that care.

Trump has had a long distaste for hospitals, and a distrust of medical treatments. Some of his closest allies note Trump wouldn’t allow himself to be hospitalized unless he absolutely had to.

I keep wondering why he hasn’t tweeted either. If anyone would want to signal with some bravado that he’s feeling A-OK, you’d think it’d be Trump on his favorite platform.

The odds of recovery remain with him. But hospitalization cuts the odds of death from something like one in 33 for a man his age to one in six. If he needs ICU care the odds will get much worse. And although his White House doctors are forever praising his manly vigor, the fact remains that he’s 74, male, and overweight, three conditions that increase his chances of a bad illness. “Compared with people in the ‘normal’ BMI range, obese patients are 74 percent more likely to be admitted to an ICU and 48 percent more likely to die,” notes James Hamblin, an MD. Because we don’t know why he really went to Walter Reed last year, we don’t know what other secret comorbidities he might be managing. None of which is to say he’s in danger right now; rather, it may be that because he’s at elevated risk of a crisis, they want him to get to the hospital now to try to stop the disease’s progression early. Clearly, though, his condition seems more serious than anyone had reason to fear when he made his announcement last night.

Update: Good question from Gabe Malor. If Trump’s symptoms are mild and his hospital visit is precautionary, why not bring Melania too? She’s in the same boat.

I would like someone to ask the White House why the president is going to the hospital, but not the First Lady.

Update: Here’s the first communique from Trump himself since last night. He does look a bit “fatigued” but he sounds good.

Beverly Hills to shut down Rodeo Drive on election day over fears of… what?

Things that make you go hmmm

'This tweet has been reported for being pornographic': President Trump strips job projection from tens of thousands of policy wonks