Trump: Why would I let the debate commission change the rules when I won the last one? 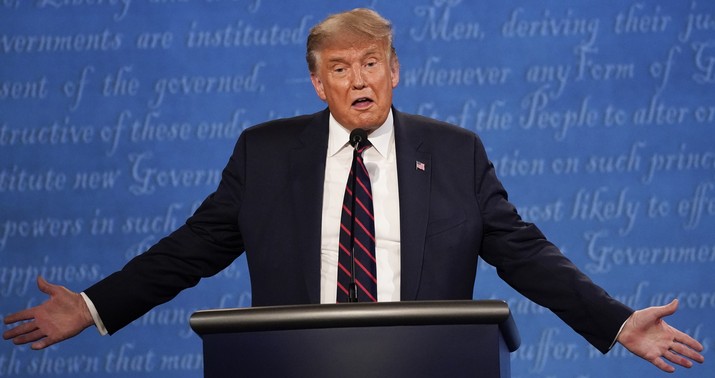 Does he mean this? Is he done debating if the rules end up being changed?

Because I don’t think the commission’s going to proceed after Tuesday’s sh*tshow with the same approach as last time, no matter how much Trump may object.

Yesterday I said I understood the argument that Biden should pass on the second and third debates even though I didn’t agree with it. A team that’s ahead and has possession of the ball will kneel on it to run out the clock; it doesn’t run a play because it doesn’t want to turn the ball over, which is what Biden would be risking if he committed a major gaffe at the debates to come. But if *Trump* passes on the second and third debates, freeing Biden from his obligation to appear, that would be tantamount to … the team that’s behind kneeling on the ball.

Why the hell would he do that?

Why would I allow the Debate Commission to change the rules for the second and third Debates when I easily won last time?

That tweet’s going to inspire some dumb takes about how Trump secretly wants to lose or whatever. He doesn’t want to lose, but he may not realize he’s losing. He’s deep in a bubble of his own making and probably sincerely believes he won the debate. For all we know, his aides are telling him he’s ahead in the polls. Maybe he thinks he’s the team with the lead and can afford to let the clock run.

Another possibility: The people around him fear that debates two and three will be just as much of a sh*tshow as the first one was, which will only do more damage to his chances, so they’re trying to persuade him to cut his losses by skipping the final two. The alternative is to get him to behave like a completely different person next time, which, c’mon:

Another person involved with the president’s campaign said they couldn’t blame anyone who turned the TV off halfway through the debate: “The few independents that we need, I imagine some of them just flipped the channel after the first hour.”…

Between now and Oct. 15, when Trump and Biden are scheduled to face off for the second time in Miami, some Trump supporters said they want the president’s demeanor to undergo a wholesale makeover. Instead of constant interference, they want brief interruptions to introduce topics left untouched by the moderator or to pose open-ended questions to Biden. Rather than juvenile insults, they want the witty one-liners that defined Trump’s performances in the 2016 GOP primary debates.

Barring a course-correction in the second debate, they said the president could permanently jeopardize his campaign’s effort to win over undecided voters and reverse his eroding support with women.

I bet there are aides telling him at this very moment, “No human could possibly top Tuesday’s performance, sir. You should retire from debating as a champion instead of going out there again and punching yourself in the nuts. I mean punching Biden in the nuts.”

Kayleigh McEnany also appeared to lay the groundwork for Trump backing out of the debates at today’s press briefing with one of his favorite arguments, that he’s being treated unfairly. Why would anyone continue to participate in a contest that’s “unfair”?

"He thinks the only way there is a fair debate is a change in the moderator and the Democratic nominee." WH Press Sec. #Kaleigh shares #Trump's opinions on the CPD changes announced yesterday to future #PresidentialDebates pic.twitter.com/6QP8md5Tll

The campaign is apparently attacking the commission in a call with reporters this afternoon as well:

The Trump campaign appears to be declaring war on the Commission on Presidential Debates in a call happening right now, describing it as biased against POTUS

Interestingly, several people this morning on Fox slammed proposals to allow the moderator to cut the candidates’ mics in order to prevent audible interruptions, the main change being eyed at debate two. Kevin McCarthy objected to it during a guest appearance, as did hosts Steve Doocy and Brian Kilmeade:

Fox News host Brian Kilmeade claims that shutting off Trump's mic during a debate would be "insulting to the most powerful man in the world." pic.twitter.com/qP1hzich0g

I wonder what happens if Trump says “I’m out” and Biden says “I’ll be there on October 15 whether you are or not.” Would a one-man event still be held? I think Team Joe would want the show to go on. The second debate is a townhall, remember, and Biden does better when given a chance to connect with ordinary voters. His team would also relish the visual contrast of Biden onstage working to win votes while Trump is absent. Trump would try to bigfoot the event by scheduling an event of his own at the same time, like a major rally or a one-on-one interview with some outlet, but if all of the networks slated to carry the debate agreed to carry the Biden townhall despite Trump not being there, that’d be a singular opportunity for the Democrat to try to reach undecideds.

Trump can’t let that happen, which is why he’ll end up agreeing to the new rules. Especially since the townhall debate will be held in Florida, the ultimate must-win battleground for his campaign. Blowing off a debate in any swing state would look terrible. Blowing off one in Florida might end his presidential chances.

More on the looting in Philadelphia last night (Update: NY Times reporter has thoughts on coverage)

“…at least 11 people shot in an area targeted by looters”