Too late? After heavy criticism from Dems, Biden campaign to begin door-knocking 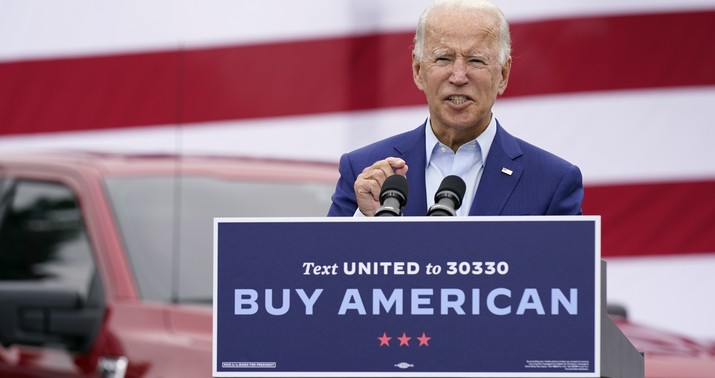 Verrrrry interesting, and one of the more hopeful signs of the campaign for Trump over the past month. Ed and I have written several times about a curious divergence in this year’s campaign. Republicans are organizing the old-fashioned way, sending staff out into the streets to knock on doors and talk to people face-to-face about their candidate, but Democrats are doing everything virtually. They’re texting, they’re emailing, they’re calling — but there’s no personal contact. It’s too risky in an age of COVID, they claim, and it hasn’t left the campaign at any disadvantage. Here’s what Biden’s campaign manager, Jen O’Malley Dillon, told BuzzFeed a few weeks ago:

They were all-in on virtual organizing. But then reports started trickling out that Republicans were making major inroads in Pennsylvania in registering voters. Then more reports followed about a huge gain in GOP registrations in Florida. Nervous local Democrats began complaining to the media that they were being outhustled by righties on the ground. Biden Inc. continued to shrug it off. Two weeks ago I wrote that “you can see the narrative for a Biden loss congealing in real time here: Not enough shoe-leather effort by Democrats.” Sleepy Joe had gone to sleep on one of the most effective means of turning voters out.

For six months the campaign has been hearing this complaint about door-knocking and for six months they yawned. And now, suddenly, it’s October 1 and something has changed. What is it? What sort of hair-raising data did they see to make them modify their “virtual” campaign so belatedly — especially with a second wave of COVID now materializing in states like Wisconsin?

Biden this weekend will dispatch several hundred newly trained volunteers to engage voters across Nevada, Michigan, New Hampshire and Pennsylvania. The effort, focusing on voters who are considered difficult to reach by phone, is expected to spread into several more battleground states and include many more volunteers in the next few days and weeks…

“It’s just harder and harder to get people on the phone,” said Patrick Sullivan, a Biden volunteer who lives in suburban Harrisburg, Pennsylvania. “So being able to go to someone’s door and talk to them makes a big difference.”…

Ahead of the voter outreach expansion, Biden’s campaign has already opened 109 supply centers across 17 battleground states to help distribute campaign literature, lawn signs and other materials for the canvassers.

Biden volunteers in Pennsylvania and Nevada began dropping campaign literature at voters’ homes just last weekend, although they were instructed to avoid any direct conversations. Those conversations will begin this weekend following a series of training sessions designed to ensure Biden’s team can engage with people at doorsteps as safely as possible.

Dillon assured the AP that their text-and-phone strategy remains totally rad and that this isn’t a “new” strategy so much as a supplement to the old one. If in fact this is aimed only at voters they’ve had trouble reaching by phone, then maybe it’s doable in, uh … 32 days? But if it’s something more comprehensive, aimed at matching the Trump campaign’s door-knocking program, surely it’s far too late in the game to mount an effort like that.

I guess we’ll find out in 32 days just how rad the virtual-outreach strategy was.

There is one X factor, though, that suggests Team Joe might be able to mobilize quickly: In a word, money. They’re drowning in it. And no matter how much and how quickly they spend, it seems, their coffers are instantly replenished. Here’s the ad picture right now:

Biden’s campaign alone has reserved nearly a quarter billion dollars in advertising over the next five weeks in 18 swing states. Outside groups that support Biden have blocked off $112 million in their own airtime.

President Trump’s campaign, which spent heavily on advertising earlier in the year, is set to spend far less. So far, the campaign has reserved $130 million in airtime in 13 states, according to data provided by one Democrat and one Republican watching the advertising market…

All told, groups backing Biden have reserved $360 million in late television. Trump and his supporters have blocked off $170 million in airtime.

An advantage of better than two to one. We’ll know soon how much each campaign made last month, but bear in mind that Biden easily outraised Trump in August ($365 million to $210 million) and that September’s likely to see an even bigger haul due to the burst of donations after Ruth Bader Ginsburg died. One would also expect contributions to ramp up further on both sides as we enter the home stretch to Election Day. For instance, Biden reportedly made $10 million in a single hour during Tuesday’s debate:

NEW: The Biden campaign has raised more than $21.5 million online today, per a campaign official — its best day of the race.

A $500 million month might not be out of the question. And it’s not just him, of course. Senate Dems are raking it in too, with Jaime Harrison reportedly planning to spend $13 million in South Carolina this month to try to knock off Lindsey Graham. Graham has $3 million in spending earmarked at the moment by comparison.

If Team Biden is basically printing its own money now, is it possible that they could put together a ground game in, say, five or six key states in a few weeks? We’d need a campaign pro to say, but I wonder if the answer is “With enough money, anything’s possible.” That’s true in every other walk of life, right? Why not campaigning?

It had better be true for Sleepy Joe’s sake. If he blows this race because of poor organizing, the recriminations on the left will be atomic:

“What I call it is unilateral disarmament,” said one adviser to a prominent Democrat-supporting Super PAC [about the campaign’s lack of door-knocking], who expressed dismay at how Democrats appeared to be choosing “the morally right thing” while running against a Republican Party that does not respect rules, norms, or laws.

“You have this situation now where one side is doing this one thing that really f**king matters… the in-person contact and face-to-face is the most valuable thing with candidates. Persuasion is impossible but for turnout, going to lower-propensity Democrats and (reminding them that the election is coming) really matters,” they said, adding that down-ballot candidates need to find a way around restrictions that the national party campaign committees have placed on the use of their funds for in-person canvassing.

I’ll leave you with a glimpse at the two campaigns’ contrast in styles from NBC.