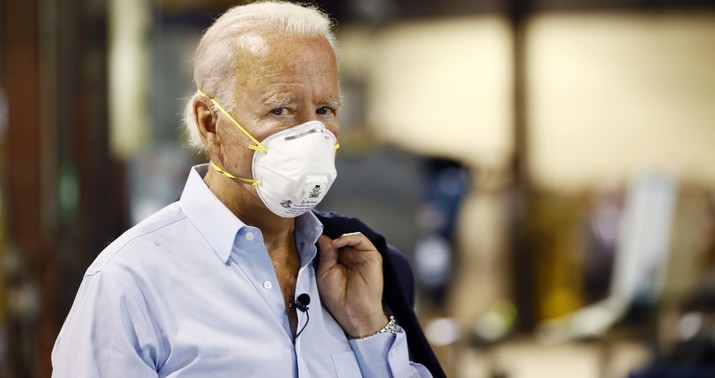 The Times’s headline for this story is “Does Biden Need a Higher Gear? Some Democrats Think So.” Higher gear?

He’s 200 years old, man. Be happy that he can still get around under his own power.

This report will feel familiar, as it has the same thesis as the Time article that Ed wrote about yesterday. That piece described Democrats in Michigan getting anxious about Joe’s light footprint; today’s NYT story finds the same thing happening across various swing states. Simply put, apart from TV advertising, there’s little evidence in battleground states that the Biden campaign actually, you know, exists. Which is bizarre given the mammoth fundraising haul that they enjoyed last month, an amount so enormous that not only did it set a record for the biggest one-month take in American history ($365 million), it wasn’t far off from doubling Trump’s own gigantic take ($210 million).

I’ve written more than one post lately wondering what the Trump campaign has been doing with all of its money. It’s time to ask what the hell Team Joe is doing with all of its money instead. They have a de facto license to print currency right now as anxious anti-Trumpers rain cash on them in hopes of ousting the president in November. They can’t drop $100 million or whatever to substantially beef up their ground game in Florida, Wisconsin, Michigan, Pennsylvania, and Arizona?

All of that is a long way of saying that you should read this story now because, if Trump ends up pulling another upset, this will be the go-to explanation among political junkies as to how Biden blew it. In 2016 the go-to explanation for Clinton’s defeat was her taking the “blue wall” of the Rust Belt for granted, most infamously by never once visiting Wisconsin. In 2020 it’ll be Team Joe’s protracted passivity towards Trump. There’s a strategy behind that passivity — they’re trying to leave Trump alone in the spotlight, believing that he alienates so many voters with his daily antics that he’ll hand the presidency to Biden on a silver platter. They’re making the election a referendum on the president by doing what they can to downplay the fact that it’s a choice. But at some point that passivity may begin to look to voters like disinterest, or a Clintonesque arrogance in believing that Democrats don’t need to compete aggressively. Worse, it may play into suspicions that Biden’s not actively campaigning because he’s simply unable, physically and mentally.

Have we reached that point already? Some swing-state Dems are wondering.

Yet as Mr. Trump barrels ahead with crowded, risky rallies, some Democrats in battleground states are growing increasingly anxious about the trade-offs Mr. Biden has made. With some polls tightening since the beginning of the summer, they are warning him that virtual events may not be enough to excite voters, and urging him to intensify in-person outreach…

Now Democrats from Florida to Nevada have worried that the team is behind where it should be in engaging some core constituencies, a problem that may also have implications for new voter registrations.

In Erie County, Pa., for instance, local party leaders have been imploring the Biden campaign to have more of a presence on the ground. They became so impatient to begin interacting directly with voters that they took it upon themselves to go from house to house to distribute campaign signs, drop literature and speak with people at a pandemic-acceptable distance…

Mr. Biden has visited Wisconsin only once in 2020, for a one-day trip to Kenosha two weeks ago after the police shooting of Jacob Blake. Until last week, he had made no trips to Michigan since the primary election there in March. He has yet to travel this year to Arizona.

If Biden underperforms on November 3 and falls short of 270, you’ll see that passage quoted many times in the weeks and months afterward. What’s worrisome for Dems is that it’s not the only evidence out there of Team Joe overlooking hugely important constituencies. All the way back in mid-May, Politico was hearing grumbling from Democrats in Florida that the Biden campaign’s outreach to Latinos was weak and without a clear message. Fast-forward three and a half months and the state is once again a pure toss-up, with allies screaming at them via reporters to get on the case. (Biden finally visited the state a few days ago to try to woo Latinos.) It’s risky to second-guess a campaign whose strategy worked like a charm in the primaries and has worked like a charm against Trump thus far, with Biden leading in head-to-head polling all year, but there are very obvious, potentially very costly mistakes seemingly being made here.

The real source of Democratic anxiety, though, isn’t Biden’s personal presence in these states. It’s the lack of door-knocking by his campaign, a glaring contrast with Team Trump’s practice of knocking on hundreds of thousands of doors each week to engage voters (or so they claim). Personal face-to-face contact with voters is basic, basic retail politics, a given in every campaign — until this year, when Team Joe concluded that the pandemic made personal contact sufficiently risky that voters would appreciate people *not* coming to their door. They’ve gambled Biden’s campaign and ultimately the presidency on the idea that virtual outreach is just as good as the real thing. They’re calling and texting people to encourage them to apply for mail-in ballots or to vote early in person, etc, but they’re not sending anyone out. If Biden ends up winning, his team will be heralded as daring visionaries who realized that politics can be done more efficiently and just as effectively through digital means while their colleagues scoffed.

If Biden loses, they’ll be excoriated by all sides for their hubris. Eschewing door-knocking will be treated, correctly, as a far more disastrous blunder than Hillary’s travel schedule four years ago. But Team Joe is sticking to its guns. Henry Gomez of BuzzFeed transcribed these comments about door-knocking made recently by Biden campaign manager Jen O’Malley Dillon:

We’ll know in seven weeks if she was right or grossly, grossly wrong. It’s worth noting, though, that Biden’s campaign isn’t the only turnout operation that’s going light because of COVID-19. The Democratic machine in Nevada, which has had remarkable success over the past 10 years getting voters to come out for its party, has also backed off during the pandemic, which may explain why Biden’s lead in that state is surprisingly thin. Things are reportedly changing lately, but you can see the narrative for a Biden loss congealing in real time here: Not enough shoe-leather effort by Democrats.

In fact, according to the Nevada story, “one unexpected benefit of the crisis … is that voters are far more likely to answer their doors: Canvassers are successfully speaking to roughly 30 percent of the people they try to reach, compared to about 6 percent in previous years.” If that’s true across all battlegrounds, Team Trump is likely getting far more bang for its buck from door-knocking than they would in normal times, making Biden’s virtual strategy that much riskier. Trump’s entire strategy is to play to his base relentlessly and then figure out a way to turn every last one of them out, plus millions more working-class white voters who didn’t bother showing up for him in 2016. A strategy that’s heavy on organization, as the Trump campaign’s is, seems well-suited to do that. Biden’s strategy (so far) seems to be to focus on advertising to make the case against Trump — even though all but a tiny percentage of voters have their minds made up about him one way or another. That strategy seems … less well-suited. I hope for Sleepy Joe’s sake they know what they’re doing.