Gallup: Trump job approval rises to highest level since May, majority expect him to win 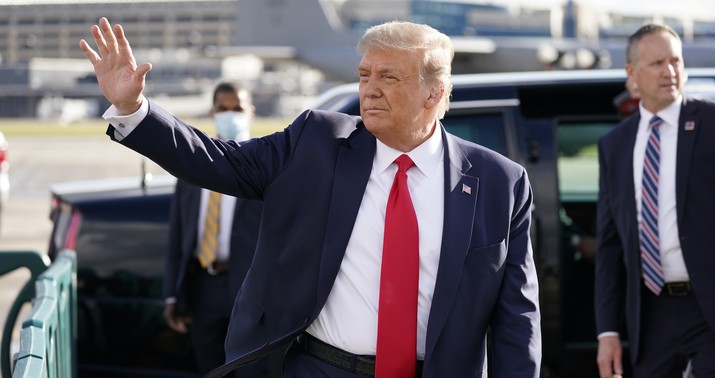 There are two differences between them, though. One is that Trump’s disapproval rating stands at 52 percent. Obama’s was 46 percent. Flipping someone who’s undecided into your column is a lot easier than flipping someone who disapproves of you, which is the task facing Trump with that crucial three or four percent that he still needs. The other difference is that O’s job approval soon rose above 50 and he ended up spending nearly all of that month at or above 49 percent. Trump has touched 49 just a few times since 2017 in Gallup’s polling, typically landing between 41-46 percent. He’s never reached 50. And on every major issue with the notable exception of the economy, disapproval of him is north of 50.

A look at the RCP average shows that Gallup’s numbers are no fluke, which seems incongruous. The state and national polling against Biden has been grim this week for Trump and yet his approval rating remains a decent 45.5 percent. How can his chances of winning the election be slipping if his job approval isn’t? Part of the answer lies in the last paragraph: Pretty much everyone who’s not pro-Trump is anti-Trump, not undecided, and the latter group is bigger than the former. But there’s also a fascinating discrepancy between his job approval and his head-to-head polling against Biden that’s shown up in a number of surveys. Namely, there’s some small but meaningful number of voters who say they approve of his performance — but are voting for the Democrat anyway. Compare the last six months of Trump’s job approval, where he enjoyed a rating of 45-46 both before and after this year’s summer swoon…

…with the last six months of head-to-head polling, which shows him unable to reach even 44 percent against Biden since the first days of April:

Looking at two recent Quinnipiac polls, one national and one of South Carolina, it seems like this subset consists mainly of independents. In the national poll, 43 percent of indies say they approve of Trump’s performance but just 41 percent choose him over Biden. In South Carolina, 41 percent approve of him but only 39 percent prefer him to Biden. It’s anyone’s guess why that is, but an obvious possibility is that it’s a personality thing. Some indies like his policies well enough, it seems, but they may have tired of the circus.

If that’s the case, then his decision to go full Trump at the debate on Tuesday was a poor one.

Here’s another interesting number from the same Gallup poll that’s out today:

You can read that various ways. Maybe it’s nothing more than the residue of Trump’s shocking 2016 win at work. The polls predicted Hillary would win last time, Hillary didn’t win, so there’s no reason to trust the polls this time. Another way to read it is as a sign of a secret preference for Trump. If you’re all-in on the “shy Trump voter” theory of why his polling is poor against Biden, here’s your evidence that some independents and maybe even some Democrats are secretly planning to vote for him. They won’t tell a pollster straight out that they prefer him to Biden, but ask them who they think will win and their hidden preference creeps into that answer.

It should be noted that this question — whom do you think is *likely* to win? — has correctly predicted the popular-vote winner in every election back to 1996. In 2000 and 2016, more Americans thought Gore and Clinton would win, and they did indeed get the most votes that fall. The wrinkle, though, is that the streak is all but certain to end next month: While Trump stands a fair chance of winning the electoral college, no one apart from the most diehard members of the MAGA base expects him to win the popular vote. Even his campaign doesn’t pretend that he has a serious shot at it, knowing that Biden is a more popular candidate than Hillary was. That’s why I think the first theory above probably explains the numbers here. Americans learned in the most dramatic possible way four years ago not to underestimate the extent of Trump’s support, no matter what the pre-election numbers say. They won’t bet against him this time.

Meanwhile, though, the map continues to look bluer. This morning Larry Sabato’s site moved its forecast for Ohio and Iowa from “lean Republican” to toss-up in both states. Biden currently stands at 274 electoral votes in their projections, more than enough to win, with Ohio, Iowa, North Carolina, Arizona, and Florida all still up for grabs.