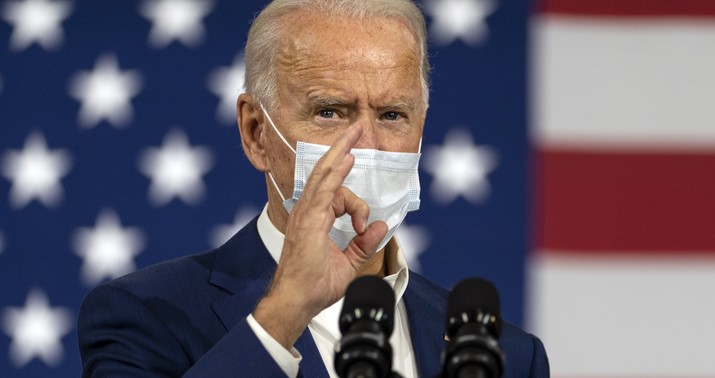 Until someone reminded me a few days ago, I had forgotten that he made the same “doping for the debates” accusation against Hillary Clinton that he’s been making against Biden this month. October 15, 2016:

The idea of making Hillary take a drug test wasn’t driven by suspicions of dementia, it was part of the theory that she had some unknown malady that kept making her cough in public and once nearly made her faint. But this is what I meant in the last post about well-to-do suburbanites who prefer Trump on bottom-line issues nonetheless leaning Biden this year. At some point, they’ve just had enough. They’ve put up with cringy nonsense of all stripes from him for four years. He won’t stop.

And he wouldn’t stop even if someone finally convinced him that whining about drug tests and earpieces does him more harm than it does Biden by reminding everyone that his behavior is consistently beneath the dignity of the office. I don’t think he accuses his opponents of doping as a “strategy,” because he thinks it’ll win him votes. I think he does it as a coping mechanism, because he can’t tolerate psychologically the idea of someone beating him in a fair fight. That’s the common thread between tonight’s debate and the endless attempts by Trump to undermine the public’s faith in the integrity of the election. In both cases, it’s unbearable for him to have anyone believe that he lost legitimately. If he fails, he must have been cheated. I’m not so sure he’s even trying to convince his fans with this barrage of accusations against Biden. He might be trying to convince himself.

President Trump is asking for an additional ground rule ahead of Tuesday night’s first presidential debate between himself and Democratic presidential nominee Joe Biden.

Fox News has learned that the president’s re-election campaign wants the Biden campaign to allow a third party to inspect the ears of each debater for electronic devices or transmitters. The president has consented to this kind of inspection, but Biden has not, so far, sources said.

Over the last several weeks, the former vice president’s campaign has also requested two breaks — one every 30 minutes — to break up the 90-minute commercial-free program. But that request has been denied by their Trump counterparts, Fox News is told.

A Trump campaign source told Fox News that “our guy doesn’t need breaks. He gives 90-minute speeches all the time.”

The “presidential” way to have raised expectations for Biden’s performance tonight would have been to back-burner the dementia claims a month or two ago and start drumming that Biden’s actually an old pro and seasoned debater who’s been through the political wars. Why, he’s a heavy favorite to win tonight! And in fairness to Team Trump, some members of the campaign did try that approach. Bill Stepien’s made that point repeatedly. The Trump way to raise expectations for Biden, though, is naturally to level outlandish allegations of cheating just in case he overperforms — that he’s on some mystery drug that makes a dementia patient suddenly sharp for 90 minutes, or that he has an earpiece in so that advisors can feed him the answers. He can’t let go of the claim that Biden is addled so he’s found a means of raising expectations that somehow incorporates it:

It’s a line of attack the president has repeatedly used against Biden, and one some of his top advisers have urged him to tone down in the lead-up to the debates, while his campaign and allies mount a last-minute attempt to raise exceptions for Biden’s performance.

You’ve probably known people with dementia in your own life. If you gave them an earpiece, how convincingly do you think they could relay things you’re saying to them in their ear as if it were their own words? Convincingly enough to do it for 90 minutes, with 90 million people watching unable to tell?

Again, though, the point of accusing Biden of being on drugs isn’t to convince voters outside Trump’s base, whom you might think would be his top concern right now. It’s to help MAGA Nation and maybe the president himself cope in the aftermath if Biden performs well. The idea that the Democrat is unfit for office (or more unfit than Trump is) must be preserved.

On Fox & Friends, Rudy Giuliani says Joe Biden "has dementia. There's no doubt about it. I've talked to doctors. … The president's quite right to say maybe he's taken adderall." The hosts get visibly uncomfortable. pic.twitter.com/2Ma7DKNBpS

Is Trump himself going to accuse Biden during the debate of being on drugs? Normally that’s the sort of low-rent attack that a president would leave to a surrogate like Rudy, but we’re past that point now.

Here’s Bret Baier sounding interested in the earpiece theory. It’ll be fascinating to see how much Fox’s news side goes all-in on the “Biden cheated” theories. As for why Team Joe is refusing to accede to the request for an earpiece inspection, you can take your pick. Either (a) someone really will be feeding him answers through his ear and it somehow won’t be patently obvious in his responses, (b) Biden’s whole campaign theme is about restoring normalcy and dignity to the presidency and he’s making a show of that here by denying Trump’s request, or (c) Team Biden knows that most of the public is sick of listening to Trump impugn people wildly and is happy to give him a pretext to keep doing it. That’s been the strategy since day one — stay out of the spotlight, let Trump talk his way out of the presidency by alienating voters day after day. If the president spends the next few days focused on what Biden had in his ear instead of talking about America’s economic recovery, that’s a few days closer to winning for Democrats.

Fox News chief political anchor gives credence to Trump conspiracy theory Biden will have a secret listening device: "As far as the listening devices and the Biden campaign's response to that, I think that's interesting. We're going to have to follow that through the day." pic.twitter.com/1k3NqY4EI3

Don’t Get Suckered By The Establishment Psy-Op