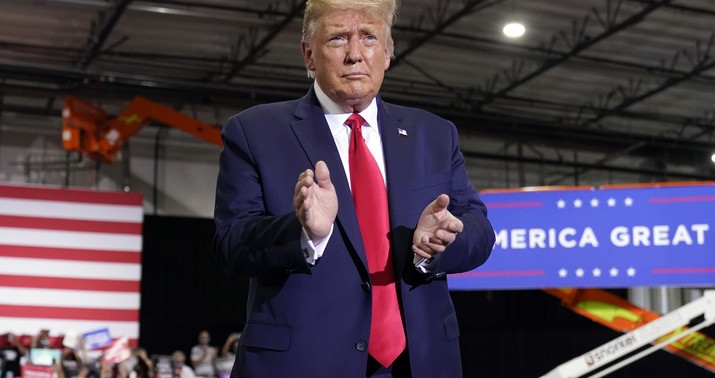 Not a very conservative position.

But not an unpopular position either, I’d guess.

Say what you will about Coulter, she doesn’t stop being a populist in cases where populism happens to work against Trump.

I don't think the conservative take on @realDonaldTrump paying no taxes should be: BECAUSE HE'S SMART!

I've paid nearly 50% of my income in taxes, year after year, and any system that allows billionaires to pay ZERO is unspeakable corrupt.

How about changing it, Democrats?

Democrats won't touch the shockingly corrupt tax system that allows real estate billionaires (and hedge fund billionaires) to pay zilch in taxes because most of the billionaires donate to them.

How about attacking THAT, Republicans?

Why, for example, are real estate magnates allowed GIGANTIC deductions for "depreciation" … when their properties miraculously sell for much more than they paid for them?

So glad @realDonaldTrump saved the carried interest loophole for these guys! https://t.co/FY4XR6cejf

In case you think she’s being opportunistic here, jumping on the NYT’s tax-return revelations to punish the president for other political sins (e.g., not completing the wall), note that she was tweeting stuff like this within two months of his inauguration:

From the beginning of his presidency she complained about him letting Paul Ryan and Mitch McConnell set a small-government Republican agenda, replete with tax cuts, instead of insisting that they pursue his nationalist program of protectionism and culture war. The Times’s scoop that he paid nothing or next to nothing in taxes annually for years due to business losses is the icing on the cake of her populist disillusionment.

There’s good news for her, though. In our age of hyperpolarization, when a person or group gravitates towards one party, it’s destined to feel enmity from the other party. America’s top business lobby, a Republican ally for years, has lately begun to drift towards the left as Democrats eye total control of government. Border hawks have complained for years that the Chamber of Commerce was selling out Americans by pushing for loose borders in the name of cheap labor from Mexico. But now that the Chamber has begun courting Dems, maybe righties will begin to demand more skepticism of business interests from their elected leaders — not just with respect to immigration and corporate giveaways but by ending the sort of generous tax treatment for fatcats like Trump that Coulter’s grousing about today.

Jack Howard, the Chamber’s senior vice president of congressional and public affairs, announced during a Friday morning staff video conference that the organization would be engaging in an “all-hands-on-deck … serious, sustained” effort to “normalize our relationships” with Senate Democrats, according to a clip of the meeting obtained by POLITICO…

The group has clashed with President Donald Trump on issues including trade and immigration and is now facing an internal revolt over its decision to endorse a slate of vulnerable freshmen House Democrats for reelection. The move represented a major shift for the Chamber, which has long endorsed and funded Republican candidates and backed few Democrats in recent years. In 2014, the Chamber’s political director declared that making McConnell the majority leader was the group’s “number one priority.”

Biden released his 2019 tax return a few hours ago, obviously to tee up a populist attack on Trump at the debate tonight. He paid a rate of around 30 percent, nearly $300,000 on close to $1 million in income — or 400 times the $750 that billionaire(?) Trump paid a few years ago. Biden’s going to try to use that as a wedge between the president and his base of white voters without a college degree. Trump still leads comfortably among that group, but not as comfortably as he did in 2016 and not comfortably enough to fully offset Biden’s huge margins among college grads.

Is the tax-return news likely to influence any votes at this point? Eh, maybe, argues Geoffrey Skelley of FiveThirtyEight:

In a [2019] Politico/Morning Consult survey, 54 percent of voters said Trump had been a “very successful” or “somewhat successful” businessman, while only 36 percent thought he’d been unsuccessful. But after being presented with information about Trump’s financial losses, the share of voters who thought he’d been a successful businessman dropped to 43 percent. And that slide was felt across the board, falling more than 10 percentage points among Democrats and Republicans, and 8 points among independents. Meanwhile, another May 2019 poll from Fox News suggested that evidence against Trump’s business savvy could influence the attitudes of a small but meaningful share of voters: 20 percent said there was a “strong” or “some” chance that new revelations could affect their views of him…

Trump’s image as a successful businessman may have also played a part in his defeat of Hillary Clinton in 2016, too, by helping to fuel the view that he would handle the economy better. In the national exit poll, 48 percent of voters said Trump would better handle the economy, compared to 46 percent for Clinton. Those same exit polls found Clinton leading Trump on who voters thought would better handle foreign policy (by 11 points) and who would be a better commander in chief (by 3 points). Voters, in other words, thought Trump was best prepared to handle the economy relative to other issues.

If Skelley’s right, a pure Coulter-esque “class resentment” play by Biden focused on how little Trump paid in taxes relative to blue-collar workers might actually be a small mistake. It’s not him gaming the tax system, as rich people are wont to do, that might shake some voters’ faith in him. It’s the fact that he’s leveraged up to his armpits and incurred staggering business losses which he used to offset his income, suggesting that he’s not the business genius he was cracked up to be on “The Apprentice.” His strongest issue this year by far is the economy. Biden’s spin on the tax returns should probably be to treat them as hard evidence that Trump doesn’t really know what he’s doing on business, not that he’s a phony populist who whiffed on his opportunity to make the tax code fairer to low-income people when he had the chance.

Although that probably wouldn’t be a bad line of attack either.

But we’re overthinking it. Biden’s seizing on the tax-return story for no more complicated reason than that it lets him play offense. And a team that’s on offense when it has a comfortable lead is a team that’s en route to victory. Every hour Trump spends having to defend himself on his tax returns or whatever else is an hour not spent giving voters a reason to prefer him to Biden. Sleepy Joe is just sleepily running out the clock.