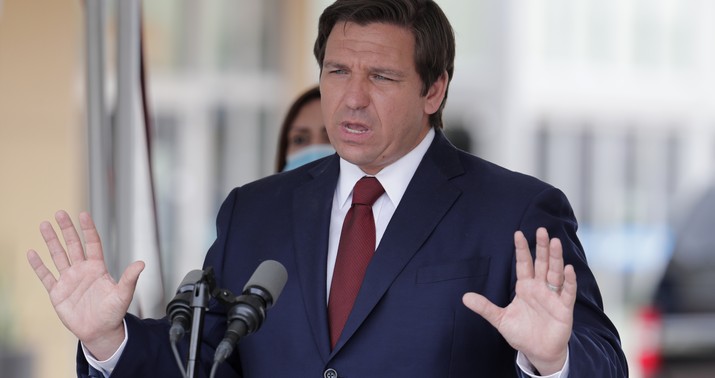 Simply put: If it’s true that the pandemic is Trump’s biggest electoral liability (and it is), then creating the conditions for maximum spread of the virus shortly before the election seems like exactly what you wouldn’t want to do. Especially in the swing state with the biggest available haul of electoral votes, whose population happens to include a famously large share of senior citizens. How does it help Trump get reelected to have seniors in Florida suddenly panicked that this winter’s second wave might now be nastier than they feared?

This reminds me of another inexplicably risky Republican decision, the Senate GOP’s insistence on going small in the next round of coronavirus stimulus. That can only hurt Trump, potentially very badly, by undermining his strongest case for reelection, the idea that he’s better than Biden on the economy. Presumably DeSantis would say that that’s why he’s lifting restrictions in Florida today — to get the economy moving again. That’s the worthiest of goals, but I don’t know how the economy can be expected to recover this winter if the second wave is as bad as experts fear and people start shutting themselves in their homes to stay safe. By lifting so many restrictions, Florida risks making its second wave especially nasty.

Which is a long way of saying that DeSantis is gambling with the highest stakes. If the economy begins to turn around next month and cases remain low, he gets to declare victory and maybe delivers Florida to Trump in so doing. If case counts are climbing by November 3, it’ll be all too easy for Democrats to lay it at his feet. And that might be the end of Trump’s chances at a second term.

Maybe there’s less here than meets the eye, though:

There are four major provisions of the order:

-It removes all remaining state-level restrictions on businesses, including on bars and restaurants, which were capped at 75% capacity in Phase 3 of DeSantis’ original reopening plan.

-It provides a general right to work and to operate a business. Local governments can limit and regulate businesses, but won’t be able to close businesses because of coronavirus concerns.

-Local governments won’t be able to prevent restaurants from operating at below 50% capacity. Under previous orders, local governments could go further than state-level restrictions, and counties in South Florida kept restaurants and bars closed after the state allowed them to reopen. Also, cities and counties won’t be able to impose any restrictions without an economic and health justification.

-Cities and counties can’t collect on any outstanding fines they issued as part of their pandemic response. The order, though, doesn’t compel local governments to refund anyone who has already paid a fine.

“Much of the state will reopen at pre-pandemic levels,” notes Politico, summing up the new stage-three regime. Right, but per the boldfaced bits above, local governments can still impose social-distancing rules within limits. Statewide restrictions are being lifted, that’s all. That’s consistent with DeSantis’s approach from the start of the pandemic, which has been to go light wherever possible on statewide rules while allowing local authorities to take the lead on containment measures. It may be that, for most businesses, the stage-three rules with which they’re forced to comply end up being little different from the stage-two rules. It’s just that those rules will be coming exclusively from city and county officials now instead of from DeSantis’s office.

The catch is that the state is going to demand that local officials justify their rules. The degree of deference shown to them by DeSantis’s administration will determine whether Florida remains operating at the current status quo, more or less, or if DeSantis really is going to get crazy with the cheez whiz by insisting that most businesses be allowed to operate at pre-pandemic — or, I should say, post-pandemic — levels.

He pointed out in his presser today that schools are open, the state’s theme parks are open, more businesses are open and yet there’s been no apocalyptic rise in cases. That’s true:

More than 9,500 people were hospitalized with COVID in Florida on July 22. Today the number is 2,200. That’s all to the good, but it doesn’t mean conditions at the moment meet the experts’ guidelines for a safe reopening. They don’t:

As of Thursday, Florida was testing 38 percent of a testing target developed by researchers at the Harvard Global Health Institute. The state had a positivity rate of 12 percent for the total number of tests processed over the two-week period ending Thursday, according to data analyzed by The Times. Positive rates should be at or below 5 percent for at least 14 days before a state or country can safely reopen, according to the World Health Organization.

The state with the highest number of COVID deaths yesterday? Florida, with 120. The state with the next-highest number was Illinois, with just 33. Florida is also surprisingly weak on testing, ranking 37th out of 50 states in tests per capita. See why this is such a gamble politically for DeSantis? There’s plenty of ammo for critics to use in accusing him later of having been reckless in moving prematurely to stage three if things go badly. But there’s also reason for him to say “this risk is worth taking” given the downward trends in cases and hospitalizations since the summer. Plus, DeSantis may be calculating that even if this backfires and a second wave results, we’re close enough to the election now that the data may be ambiguous on Nov. 3, leading Floridians to conclude that there’s no “wave” after all. If cases rise 10 percent between now and then, is that a crisis in the making or just the cost of doing business if you want a functioning economy?

I think the chief risk to him and Trump lies in how seniors react to today’s decision, entirely apart from what the data looks like on Election Day. If they feel less safe, if they fear that DeSantis and Trump are prioritizing business concerns over the health of older Floridians, maybe that’s all it takes for a meaningful shift towards Biden.

The one move DeSantis made today that’s apt to cause him the most grief later is reopening bars for business. He already did that earlier this month, Politico notes, but capped them at 50 percent capacity. Today’s stage-three measures provide that “bars, pubs and nightclubs that derive more than 50 percent of sales from alcohol should operate at full capacity with limited social distancing protocols,” per a local news outlet. As noted above, local officials can still impose their own restrictions, but they need DeSantis’s approval for that. Given how much attention has been paid by public health experts over the past few months to the special danger posed by bars — inhibitions are down, people are crowded together, they’re shouting, they’re not wearing masks — DeSantis’s decision to lighten up on them will be the one that’s cited most often later by critics if things get bad in Florida again.

NBC: Say, you know who turned out to be right about forest fires?

Making a federal case out of it.

Trump campaign to debate commission: We want the third debate to be about foreign policy, not the topics you’ve chosen

Governor Gretchen Whitmer: If You’re Tired of Masks And Wish You Could Go Back to Church, Vote for Biden

“turning work in on time and classroom behavior will now instead count towards a student’s citizenship grade, not their academic grade.”

Should we be retrieving things from the Titanic?

Silence of the grave

“I think Joe Biden has a scandal coming up that’s going to make him almost an impotent candidate.”

Jeffrey Toobin suspended over ‘Zoom dick incident’ (Update: He was ‘touching his penis’)

“I thought no one on the Zoom call could see me.”

Bizarre poll: Marylanders support police, but back both funding and defunding them?

We love you. Now leave

How about mainstreaming Marxism propaganda in kids’ programming?