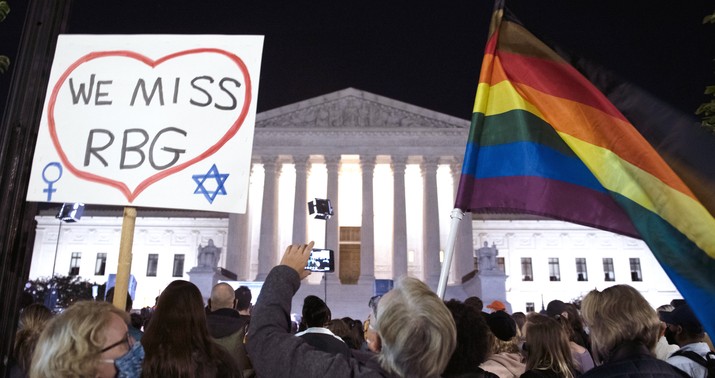 After the news broke last week that Ginsburg had died and righty conventional wisdom quickly congealed that Republicans should confirm someone before Election Day, I thought of Corey Lewandowski, of all people. Two years ago, before the midterms, he made the case to the Times that Republicans shouldn’t run on the Trump tax cuts, their biggest achievement of Trump’s first two years. His quote stuck with me: “People don’t turn out to say thank you. If you want to get people motivated, you’ve got to give them a reason to vote. Saying ‘build the wall and stop illegals from coming in and killing American citizens’ gives them an important issue.”

Normally Trump grasps that point very well. One of his recurring talking points since August has been that electing Biden would mean that Antifa will rule America’s streets, even though a core theme of right-wing media at this stage of the race is that that’s sort of true now. Still, he understands that averting an apocalypse caused by the other side is a much stronger motivator for undecided voters than asking them to reward your own side for the things they’ve accomplished. Which means, logically, in the case of the Ginsburg vacancy, the smart “fear” play is … to not fill the seat and scare the hell out of righties that Biden will get to fill it if they don’t turn out in historic numbers.

“Elect me so that I get to make the appointment” worked out okay for him as a campaign message in 2016. I think he might even have considered it this year *if* he, not Biden, had a five-point lead in the national polls. But because he’s an underdog, he really has no choice but to fill this seat while he has the power to do so. Which means his strongest strategy, a “fear” play, is unavailable. And which also means, pew Lewandowski’s logic, that filling the seat in October shouldn’t do much to boost his support on the right. People don’t turn out to say thank you. On the contrary, with Trump soon to have appointed more justices than any president since Reagan — a span that includes three two-term presidents — soft Republican supporters might conclude that they’ve gotten everything out of him that they could have possibly hoped for in terms of judges and end the Faustian bargain they made with him in 2016 by voting for Joe.

The Times asked a Republican-leaning group from Texas and Georgia what they thought of the vacancy. Results:

The surveys began on Wednesday, two days before Ms. Ginsburg’s death. Neither Mr. Biden nor Mr. Trump fared significantly better in interviews conducted after her death, after controlling for the characteristics of the respondent, like state and party. If anything, Mr. Biden fared a bit better, but the difference was not meaningful…

These voters said they trusted Mr. Trump over Mr. Biden to choose the next Supreme Court Justice by a six-point margin — the same as his overall lead among those respondents.

This Republican-leaning group also preferred that the winner of the presidential election choose the next Supreme Court justice, rather than have Mr. Trump appoint the next justice before the election, by a 12-point margin. Yet at the same time, the results suggested that Mr. Trump was unlikely to face a serious political cost: By a 14-point margin, the same voters thought the Senate should act on any Trump nominee before the election.

A reddish group trusts Trump slightly more to fill the seat and prefers to see the Senate act before the election if a nomination is made — but, interestingly, thinks the winner of the election should make the pick even though that creates an enormous risk that Biden would be the one to do it. I’ve seen upwards of 10 different polls on that point over the past week and every last one of them has found the same thing, that voters think the next president should make the call. They may not feel strongly about that; as Cohn notes, the Times’s group still thought the Senate should proceed on a nomination if Trump picks someone. But when they’re asked the question, the answer across multiple surveys is consistent. Here’s one, for example:

Republicans’ internal polling is reportedly causing some “jitters” in the White House too:

Among some of the president’s advisers, jitters stem from a recent internal Republican poll discussed among officials in the White House and the Trump campaign this week that contained an alarming range of signs about the vacancy, according to people who reviewed it. The poll — conducted over the weekend among about 1,500 likely voters in 17 swing states, including Arizona, Wisconsin, Florida, North Carolina and Pennsylvania — showed that 51 percent of voters said they trust Biden more than Trump to handle the vacancy, while only 43 percent said they trusted Trump.

Again, just because voters prefer a different outcome to the one they’re about to get doesn’t mean they prefer it strongly enough that votes will move as a result. And there are, as I say, ways that Democrats could so badly botch how they handle the next month that they end up turning some voters against them. The obvious one is by attacking Amy Coney Barrett’s faith, something they did once before in the person of Dianne Feinstein when Barrett was up for confirmation to the Seventh Circuit. A poll this week shows that Biden enjoys a 12-point lead among Catholics, a wider spread than Hillary Clinton enjoyed in 2016. Shaming Barrett for her religious devotion could change that, and could also offend non-Catholics who are impressed by her and resent seeing her attacked personally for a matter of conscience.

But there are pitfalls for Republicans too. We’ll see if this changes once Barrett is formally nominated, but thus far Democrats have shrewdly stuck to attacking the nomination on grounds that Trump’s pick is likely to overturn both Roe v. Wade and ObamaCare. The idea of dumping ObamaCare in the middle of a pandemic, when tens of millions are laid off and without employer-provided insurance, is a potential gamechanger in swing states. Axios calculates that upwards of 10 million people in battlegrounds would be at risk of losing their coverage if O-Care were nuked. The unfairness of holding open a seat that was vacated in February of an election year and then filling one that was vacated in September of an election year is fine fodder for political junkies to argue about, but I don’t think Dems will get far with undecideds with process arguments. Bottom-line appeals about health care — the issue that won them back the House in 2018 — are much stronger.

As for Roe, a poll taken earlier this year found that 69 percent of the public opposes overturning it. But the risk to Trump from the issue goes beyond that. Dave Wasserman of the Cook Political Report pointed out a few days ago that pro-choice voters were a surprisingly large part of his winning margin in 2016:

Although Trump downplayed abortion in 2016, voters w/ mostly pro-choice attitudes made up more than a fifth of his support in plenty of battleground states:

Now, there may actually be an opportunity for Dems to win back many of these voters by tying Trump to the "DC swamp:" Mitch McConnell and Rs who want to "end Roe v. Wade, cut more taxes for billionaires" etc.

In fact, Biden is *already* winning many of these blue-collar voters.

Trump’s whole appeal for some of these voters was that he was a different kind of Republican. Yeah, he said he was pro-life throughout the campaign and has continued to say so, but he never presented himself as an evangelical or a warrior for “values.” He was a louche Manhattan billionaire who said what he had to say to win a primary. Then he filled two Republican seats on the Supreme Court, which *might* have tilted the balance against Roe (given Anthony Kennedy’s support for the decision) but probably didn’t given John Roberts’s allergies to sweeping conservative victories. Now that Trump’s in a position to replace Ruth Bader Ginsburg, though, the stakes are real. Maybe his pro-choice voters won’t care; conceivably they’ve joined his cult of personality and will support him no matter what. But 69 percent is a big majority to be on the wrong side of.

If he held the seat open, he wouldn’t have any of these problems. His base would be outraged, granted, but they’d be in the same position as Susan Collins’s base in Maine. You may resent your candidate for not seizing the opportunity they’ve been granted to make the Court conservative for another generation, but the cold hard fact is they’re the only game in town. You want to fill that seat? Then you turn out and you vote for them, period, no matter how annoyed you are. As I say, I think McConnell and Trump and others might seriously have considered that strategy if he were favored to win. As things stand, though, they’re going to make the same ruthless calculation that Pelosi made in 2010 with passing ObamaCare: It’s worth doing this even if the price is being turned out of power for years.

*If* there’s any electoral fallout from filling the Ginsburg seat, I suspect it’ll mainly show up in fundraising. Democrats have already blown the roof off over the past week in terms of donations. I can’t even imagine how much rage-cash they’ll be pouring in over the final few weeks, after Barrett is confirmed. But it’s also possible, and significant, that the sheer anger on the left over the GOP’s bizarro-Garland approach to this plus the prospect of losing Roe and ObamaCare will bring out progressives who were otherwise too disenchanted to bother showing up for Biden. If there’s to be a surge in polling for one party or the other due to SCOTUS politics, in order words, you’d expect it to be for Democrats. For exactly the reason Lewandowski stated: You don’t get psyched to vote because you’re feeling grateful, you get psyched to vote because you’re angry and afraid. And Democrats are enraged and terrified.