Dems: On second thought, please don’t send your ballot through the mail 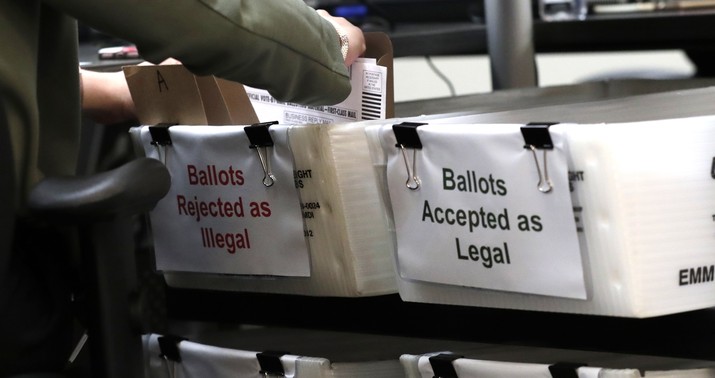 I think this is partly a Trump thing and partly a “you know, maybe mail-in ballots aren’t that great an idea after all” thing.

Driving the news: In Colorado, former Gov. John Hickenlooper, who’s running against Sen. Cory Gardner, told Axios that he’s encouraging voters to physically take their mail-in ballots to a dropbox and to do so “early, really early.”

Paulette Jordan, a Democratic candidate for Senate in Idaho, told Axios that she’s encouraging voters to take their filled out mail ballots in person to the county courthouse.

Black PAC has moved from exclusively educating voters on voting by mail to informing about all available options: in-person, absentee, early voting and voting on Election Day.

The Collective PAC — the largest Black-led political action committee targeting Black voters and candidates — is pivoting, too. “We’re shifting away from making plans to vote by mail to voting early in person,” Quentin James, the group’s founder, told Axios.

The Trump part of this equation is that he’s counting on being ahead on election night when the same-day votes are counted, whereupon he’ll insist that he’s the rightful winner of the election because all mail-in ballots are inherently suspect. (They aren’t.) The term “blue shift” has begun creeping into election analyses lately: That’s the idea that, a la Arizona 2018, because Democratic voters are much more likely to vote by mail, Democratic candidates may “come from behind” in a close race during the post-election counting of those ballots. The Republican candidate (e.g., Martha McSally) ends up leading when the election-day votes are counted but then the Democrat (Kyrsten Sinema) overtakes her in the following days as mail votes are tallied — that’s the “blue shift.” Because Trump can’t tolerate the idea of losing, he’s going to seize on it as prima facie proof of fraud this November even though it’s a perfectly straightforward electoral dynamic.

Of course, if he hadn’t spent months trying to convince his own base that mail-in voting is necessarily corrupt, there wouldn’t be as much of a blue shift as there is. There’d be lots of Republican votes in the mail to be counted too. As it is, though:

Trump-lovers will be at the polls in person on Election Day (or during early voting). Trump-haters will be mailing their votes in. The “blue shift” will be extreme, and the more extreme it is, the easier it is for Trump to convince those who are eager to be convinced that his loss can only be attributable to cheating. So go figure that Democrats are suddenly scrambling to deny him that talking point by convincing their voters to vote in-person too.

Of course, there’s another way to avoid a “blue shift.” We could simply have states start counting mail-in ballots *before* Election Day, not the day-of. We count votes cast during early voting before Election Day, right? Well, do it for mail-in votes too. That way, most of the votes will be known on election night, denying Trump his opportunity to call foul. (But not denying it completely. Provisional ballots will still need to be counted after Election Day, as will any mail-in votes submitted in states that allow ballots to be cast so long as they’re postmarked by Election Day.) A noteworthy point here:

Interesting that the GOP is resisting this otherwise sensible move, no? It’d be one thing if they opposed mail-in voting altogether; if you buy Trump’s line that the process simply can’t be trusted, ending the practice would make sense. But blocking efforts to count valid mail-in ballots before Election Day seems inexplicable — unless they’re actually trying to enable Trump’s attempt to undermine public confidence in the election results. That is, if Trump is destined to lose, Republicans may *want* a blue shift to make it easier for him to cry that he was cheated after the fact.

That’s the state of our country right now. If it serves the party to sow distrust in America’s institutions, that’s what you do.

There’s a non-Trump component to all this too, though. Although he grossly exaggerates the unreliability of mail-in ballots to serve his own interests, he doesn’t overstate them completely. Nervous election-watchers have been following the legal saga in Pennsylvania over “naked ballots,” another term of art you’ll be hearing more often in the weeks to come. “Naked ballot” comes from the fact that mail-in votes in PA need to be enclosed in *two* envelopes, both of which are provided with the ballot. The inner envelope is for secrecy, to allow the voter to vote “anonymously.” The outer envelope lists the voter’s identifying information and contains the inner envelope and the ballot. A poll worker validates that the info on the outer ballot is correct, then opens the envelope and places the inner envelope containing the anonymous ballot in a stack to be counted by someone else. The question: Since many Americans are … not bright, and can’t follow basic instructions, what happens when people inevitably send a ballot through the mail in only the outer envelope, without the inner secrecy envelope — i.e. a “naked ballot”? Does that ballot count?

But throwing out naked ballots could be costly for Biden, in a state President Donald Trump won by only about 44,000 votes in 2016, or less than 1%.

“While everyone is talking about the significance of extending the mail-ballot deadline, it is the naked ballot ruling that is going to cause electoral chaos,” Lisa Deeley, chair of the Philadelphia city commissioners, wrote in a letter to state legislative leaders urging them to change the law to allow the ballots to be counted.

Deeley warned there will likely be tens of thousands thrown out — maybe more than 100,000.

Trump won Pennsylvania by 44,000 votes four years ago. Because Democrats are much more likely to vote by mail than Republicans, a “naked ballot” controversy involving 100,000 ballots might well erase a Biden victory in the state and, with it, a Biden presidency.

The solution, once again, is to get Democrats to vote early and in-person. Look who’s starting to speak up about it:

In-person early voting should be easy and convenient for all. The Flint, MI City Clerk's office will be open the last three weekends before Election Day for folks to cast their ballots. It's an example that cities and states across the country should follow.

There’s one weird wrinkle to Sleepy Joe’s newfound support for in-person voting. If that’s safe enough to do, why isn’t door-knocking in swing states safe enough for his campaign staff and voters? He’s at serious risk of losing Florida, and probably not just Florida, because he’s ceded the field to Republicans on basic face-to-face organizing. If turning out to vote is safe in a pandemic, interacting with voters at their front doors while standing six feet away and wearing a mask should be safe too.

EXCLUSIVE! Dr. Birx says in-person voting should be as easy as going to Starbucks. “If you go into Starbucks in the middle of Texas & Alabama & Mississippi that have very high case rates, then I can't say that it would be different waiting in line in the polls.”@realDonaldTrump pic.twitter.com/18ZH1fqhNH