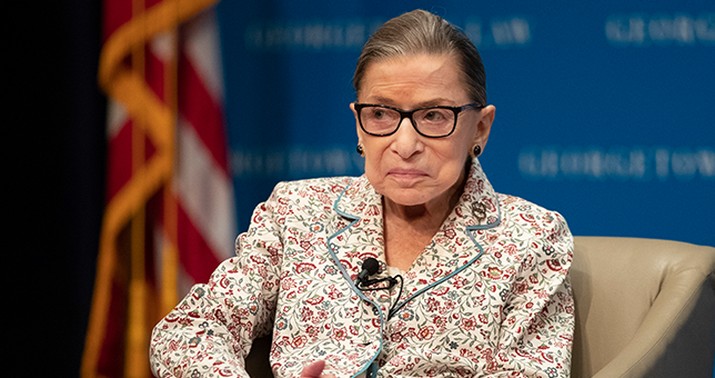 As of early Friday evening the Sunday shows were set to tackle an array of topics this morning. The prospects of a second wave of COVID; the state of the presidential election; the Abraham Accords; political interference with the CDC; and the stalled coronavirus stimulus relief negotiations.

It’s all noise now. The guests relevant to those other issues remain booked but there’s only one subject of conversation in America this morning.

All five shows will devote themselves to the passing of Ruth Bader Ginsburg, the brutal Supreme Court confirmation battle to come, and whether the vacancy is more likely to benefit Republicans or Democrats on Election Day. No top political aides to Trump were scheduled to appear today before the news about RBG exploded but Pence aide Marc Short was set for “Fox News Sunday” to discuss other matters. We’ll see if the White House wrangles someone higher up to appear or whether Mitch McConnell makes a cameo somewhere. As for Democrats, Nancy Pelosi was booked for “This Week” to chat about the stimulus battle. She’ll now have plenty to say about the Ginsburg fallout even though she’s not *directly* relevant to the confirmation process. I stress “directly” because Congress needs to pass a spending bill soon to avert a government shutdown. Would Democrats dare block that bill as a way to pressure Trump and McConnell not to confirm anyone before the election?

Might depend on what the polling says next week about whether Americans want the seat filled ASAP or not.

The few minutes of airtime this morning not devoted to Ginsburg will be spent exploring the ongoing travesty at HHS, in particular the public meltdown by spokesman Michael Caputo and the political pressure brought to bear on the CDC to tweak its guidelines on testing people without symptoms. Defending the administration will be HHS Secretary Alex Azar on “Meet the Press” and Trump testing “czar” Brett Giroir on “This Week” and “State of the Union.” Critics will include former CDC director Tom Frieden and Bill Gates, both of whom are set for “Fox News Sunday.”

Oh, and Bob Woodward will be on “Meet the Press” to continue flogging Trump for what Trump told him in interviews. The full line-up is at the AP.