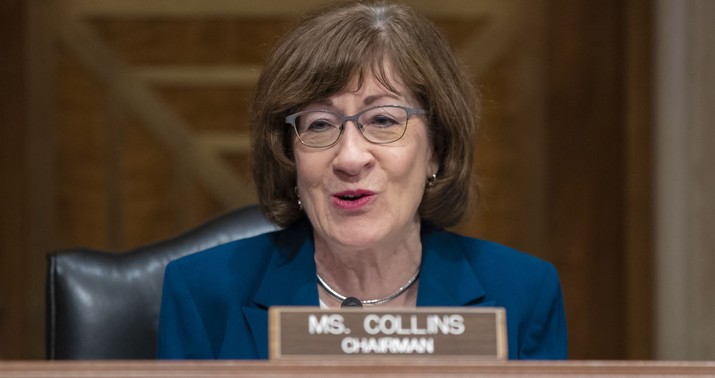 It probably shouldn’t be considered an omen that Collins is trailing. She’s a Republican who represents a blue state, and not just any blue state. Maine is a state that’s well-matched to Biden’s strengths this year, as the population is old and exceedingly white. Four years ago those groups were Trump constituencies but Sleepy Joe has been running stronger among them than Hillary did. Go figure that a Republican running on the other side of the ballot from him would be having trouble.

Even so, Collins has been in the Senate for nearly 25 years, longer than most of her colleagues on the ballot elsewhere across the country this fall. Apart from her first election, she’s won every race with ease. (And even the first one wasn’t super-tight. She won by five.) Name recognition plus her status as a well-known centrist would, one might think, give her a slight edge — especially with Republican voters in Maine mindful of the fact that control of the Senate might depend on the outcome of her race.

But Democratic voters there recognize that too, of course. And according to this NYT poll, 70 percent(!) of Maine voters want the same party to control the presidency and the Senate majority, with 53 percent saying they want the Democrats to have that majority. In a state where Biden is whipping Trump, that desire for unified control of government makes things even more difficult for Collins. The topline number: Democrat Sara Gideon 49, Collins 44.

A large share of voters appear determined to punish Ms. Collins for her affiliation with Mr. Trump: Fifty-five percent of voters said they disapproved both of her vote against impeaching Mr. Trump and her vote to approve Justice Brett M. Kavanaugh’s nomination for the Supreme Court…

Ginger Cazan, 69, of Swanville, is the kind of Maine voter whom Ms. Collins might once have been able to draw into her column. A self-described moderate Democrat, she said that she personally “would never have an abortion,” but that she was dismayed by Ms. Collins’s vote for Justice Kavanaugh because she believed he would “change the law and take women’s rights away.”

Ms. Cazan said she planned to vote for Mr. Biden and called Mr. Trump a “dictator in waiting” — which reminded her of another reason she opposed her Republican senator: Ms. Collins, she recalled, “did not impeach Trump when she had the chance.”

Kavanaugh and impeachment were the two biggest votes Collins has taken during Trump’s presidency. She tried to finesse the latter by joining Romney in calling for the Senate to hear testimony from witnesses, but that got lost in the shuffle of the final vote to acquit, which she joined. There was no good option for her: If she had joined Romney as well in voting to remove, her Republican base in Maine would have collapsed.

Both in this poll and in a recent one from Quinnipiac, Collins is running ahead of Trump — just not by enough to actually put her in front of Gideon. Biden leads the president 55/38 in the Times survey and 59/38 in the Quinnipiac poll; Gideon led Collins 54/42(!) in that latter one. That result was an outlier, but note that Gideon has led Collins in every public poll of Maine taken this year, typically by five points or so, which is unsurprising given the margins Biden consistently enjoys over Trump there. Clearly the president is weighing down Collins, not just on culture-war stuff like Kavanaugh or impeachment but on the pandemic too. The Times finds that Maine voters favor Biden 60/35 when asked whether he or Trump would handle COVID best.

What does this mean for the big picture in the Senate? As of this morning FiveThirtyEight’s model sees Democrats as a favorite to have a majority next year:

The same model gives Gideon a 53 percent chance of winning, which feels low at first blush in light of the polling but is probably a function of Collins’s long incumbency. Four-term senators who are competing aggressively and reasonably well-matched ideologically with their state typically don’t lose. It takes a lot to drag them down, but the pandemic plus some unpopular marquee votes Collins has taken since 2018 are heavy loads to bear.

Maine wasn’t the only battleground polled by the Times. They also surveyed Arizona and found Biden leading by nine points and Mark Kelly ahead of Martha McSally by eight. Lots of attention has been paid lately to the polls tightening in Florida (thanks to Trump’s surprising strength with Latinos there) and in Pennsylvania, but less has been paid to the fact that Biden’s lead in Wisconsin and Arizona seems to be widening. He led Trump by an average of just two points in AZ on August 22; today he leads by five, which is surprising not just because of Arizona’s heritage as Goldwater and McCain country but because the state has overcome its brutal summer wave of COVID. You would expect that to soften opinion on Trump, as it seems to have done in Florida. Not so.

And losing Arizona would be a very big deal:

A reality that's getting harder to escape: The 2 states Trump World knows have slipped, and may be unrecoverable, are AZ & MI. WI isn't far behind.

If Biden flips all 3, and Trump holds everywhere else, it's 269 apiece.

Omaha could soon be the center of the political universe.

By “Omaha,” Alberta is referring to the fact that Nebraska awards its electoral votes by congressional district, not winner-take-all to whoever gets the most votes statewide. Trump won Nebraska’s Second District, worth a single electoral vote, by three points in 2016. If Biden flips that this year, that could give him exactly enough to get to 270 and the presidency.

But there’s another possibility. Remember that Collins’s home state of Maine also awards its electoral votes by congressional district and that Trump swiped a single vote from Hillary there by winning ME-2 four years ago. The Times’s new poll of Maine today suggests the outcome could be different this time: Biden is up two points in the district right now. Even if NE-2 ends up tilting Trump again, Sleepy Joe’s strength statewide with Maine’s older, whiter population could get him to 270 there too.

In lieu of an exit question, read this excellent John McCormack look at why Arizona, of all places, is bedeviling Trump this year. It’s not just a matter of the state trending blue over time or the pandemic hurting him. It’s a confluence of factors unfavorable to him — fewer rural voters, large Mexican and Mormon populations, Biden overperforming with seniors, and transplants from deep-blue California. Worth noting: Apart from the Mormon bloc, those same factors also apply to Texas, which still favors Trump but not comfortably according to the latest poll. Stay tuned.