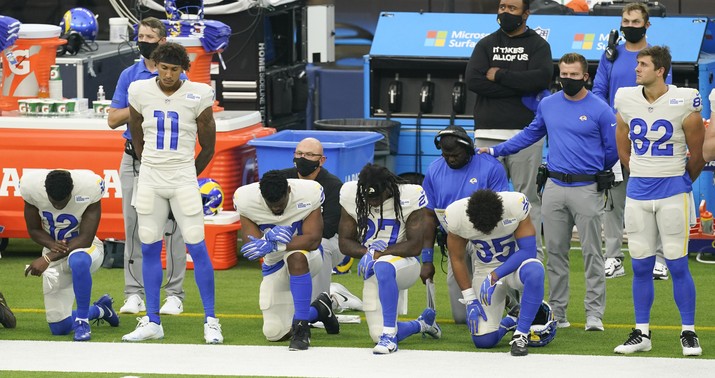 We’re still waiting for the final ratings as I write this at 3 p.m. ET. The preliminary ratings don’t include the west coast, which is important to note since the L.A. Rams were involved in last night’s game. The final ratings could be considerably bigger when California’s numbers are added in.

Anyway, not lookin’ good early for the fully woke NFL:

Even with the usual ratings gold of Jerry Jones’ team on the field, the NFL and NBC didn’t get that win – at least not in the early numbers. Despite two teams with big national followings, SNF snared a 4.7 in early ratings among adults 18-49 and 14.81 million viewers last night.

In numbers certain to change, that’s a fall of 28% in the demo and a hard decline of 23% in sets of eyeballs from the early numbers of the the September 8, 2019 SNF season debut…

To add further context, last year’s opener, a 33-3 pummeling of the Pittsburgh Steelers by then reigning Super Bowl champs the New England Patriots, went on to pull in an audience of 22.2 million on NBC, which was pretty much even with SNF’s 2018 season premiere. That 2019 figure inched up to 22.7 million when digital platform viewing was added in.

“Two teams with big national followings”? The Rams don’t even have a local following, bro.

What’s interesting about this is that Thursday night’s season opener at Kansas City — the one where fans booed during the moment of silence for racial unity — also saw a ratings decline from last year. That game, a rematch of an AFC playoff game from earlier this year and a contest of marquee quarterbacks, was down 12 percent ratings-wise from the 2019-20 season opener.

Could it be that fans are simply oversaturated with sports right now? Deadline noted last week that the Chiefs/Texans game had to compete for eyeballs with NBA and NHL playoff games, something that never happened in years past since those sports finished their seasons during the summer.

But there was no competition for the Rams and the Cowboys last night (besides baseball, which is standard in September). The NBA and NHL each finished their games in the afternoon, before kickoff. And although fans have an unusually large sports menu to choose from right now, football is football. How to explain that steep ratings drop-off?

Could it be … politics? New from Morning Consult:

Note which group has seen the largest negative shift. As football has turned woker, Trump fans say they’re much less interested than they used to be. Although, weirdly, anti-Trumpers have shifted in the same direction, nearly as strongly. I can’t make heads or tails of that. Maybe it’s a pandemic thing, i.e. Democrats have nothing against the NFL, they’re just distracted by getting through this nightmare and not paying attention to the league the way they used to. But that’s hard to square with the rest of the data: Why would strong anti-Trumpers be more allergic to the league due to COVID worries than those who view the president somewhat favorably or unfavorably are?

I’m tempted to conclude that lefties feel alienated by the NFL because it’s *not woke enough.* To wit:

While the NFL runs propaganda about how they care about Black Life, they are still actively blackballing Eric Reid (@E_Reid35) for fighting for the Black community. Eric set 2 franchise records last year, and is one of the best defensive players in the league. https://t.co/KQXTaOCcnU

It could be that some progressives are holding out for Reid and especially Kaepernick himself to be signed before coming back to the game, although I find that hard to believe. For how many lefties is Kaepernick’s status really an issue so urgent that they’d lose interest in the sport until he’s back on the field?

Meh. We probably shouldn’t confuse the poll results above with actual behavior. Although ratings are down, they’d be down much further if everyone who had supposedly lost interest in the sport were tuning out. Some fans are still watching, although possibly less intently than they used to.

Not all of the games this weekend were a bust ratings-wise, by the way. I’ll leave you with this. The sheer novelty of watching Old Man Brady play his 80th season in another team’s uniform made the Bucs/Saints game a (small) winner for Fox, if not for the Bucs themselves.

Fox pulled a 16.2 overnight with its national NFL window, which featured the cognitive-dissonance rush of seeing Tom Brady tossing a pick-6 while sporting a weird uniform. That's up 2% YOY vs the analogous Giants-Cowboys (15.9) game in 2019, which averaged 23.9M/13.5 HH in L+SD.

Ruth Bader Ginsburg will be first woman to lie in state at U.S. Capitol

Also at the Supreme Court.