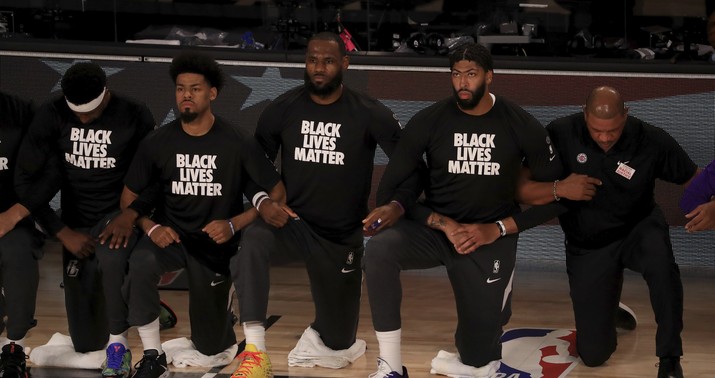 “Here is a result that ‘Kenosha will help Trump win!’ pundits may be surprised by,” sniffed Nate Silver about this data. It’s true, we should be careful not to assume too much about how the public feels about racial and race-adjacent issues right now. At the beginning of June, when BLM protests erupted nationally, I would have bet good money that that would trigger a white backlash and a bump for Trump in the polls. That was wrong as could be. He ended up sliding to a nine- or 10-point deficit, his worst stretch all year. Voters sympathized with the cause and thought Trump’s lack of sympathy for it made for an abysmal approach to race relations. He’s climbed out of that polling hole now, but there’s no particular reason why another round of activism couldn’t put him back in it.

What’s tricky about guesstimating reaction to the NBA strike (which will end tomorrow) is that the initial support for BLM has faded lately. Just yesterday I flagged a poll from Wisconsin showing that black enthusiasm for the movement remains high while white enthusiasm has cooled. Will the Jacob Blake shooting and the NBA’s response to it push the public back towards the concern it felt about police violence in June, or will it accelerate whites’ shift towards skepticism of the activism around it? It could go either way, it seems.

YouGov took a snap poll after the Milwaukee Bucks walked off the court in protest a few nights ago and found, surprisingly, that most Americans are behind the strike. Losing the NBA once this year to COVID restrictions and then a second time to political unrest might lead you to suspect that fans’ patience would be exhausted, especially given the violence this week and especially since the league has already strained to accommodate players’ interest in activism. Not so:

The #MilwaukeeBucks and five other basketball teams decided to not play their scheduled @NBA playoff games in protest of police shooting Jacob Blake earlier this week. Do Americans support or oppose this decision?

Does a resurgence in support for BLM-style protests mean another polling bounce for Biden is coming? Not necessarily. Perry Bacon pointed out a few days ago that, despite waning support for the movement, Biden’s national polling has remained solid. He did seem to rise in June on the strength of the protests (or, rather, on the strength of Trump’s poor response to them) but the slide by BLM lately hasn’t produced a similar slide for Sleepy Joe. The fortunes of the two aren’t as closely linked as we sometimes imagine, Bacon argues, noting that Biden has distanced himself from BLM’s more controversial proposals, like defunding the police. Likewise, while BLM’s public visibility has dropped as news about George Floyd’s murder has faded, Biden’s hasn’t. Biden also has the advantage of having an unpopular foil in Trump; BLM’s foil, to the extent one exists, are the police, who seem more urgently needed than ever as riots spread to more cities.

Which brings us to the caveat to Silver’s point. It may simultaneously be true that Americans remain sympathetic to peaceful racial-justice protests like the NBA strike and horribly alienated by the arson and violence in Kenosha this week. Just a few hours ago I linked this Reason post reminding people that statistical evidence exists that peaceful activism draws voters towards Democrats while violent demonstrations repel them. That is, it’s possible for Americans to be pro-NBA and drawn to Trump because of Kenosha. Here’s a graph to chew on:

That’s the RCP average across several key battleground states. It may be true that Biden continues to lead comfortably in national polling, but national polling doesn’t matter. The battlegrounds do. And as you can see, beginning on July 24, Trump has erased more than half of Biden’s lead there. He trailed by 6.3 points that day; today he trails by 3.0, which happens to be his smallest deficit since May 1. That is, in the swing states, Trump has completely overcome any advantage Biden received from the summer protests and the summer wave of COVID. Can we definitively attribute that to a backlash against violence in Portland and Chicago and Kenosha? No. But it’s a logical assumption.

Having said that, given the public’s apparent sympathy for peaceful activism to protest the shooting of Jacob Blake, these two master communicators might want to ease off sneering at the NBA for Trump’s sake.

"The NBA players are very fortunate that they have the financial position where they're able to take a night off from work without having to have the consequences to themselves financially," says White House senior advisor Jared Kushner on the NBA player boycotts last night. pic.twitter.com/nHlRBNIzaf

Marc Short, the chief of staff to VP, on #NBAboycott: "It's absurd and silly… If they want to protest, I don't think we care." pic.twitter.com/AxHKOZe5Ab

Seeming callous towards righteous demonstrations is how the bottom temporarily fell out of Trump’s polling in June. Now would be a bad time to have it happen again.

By the way, the deal NBA players reached with the league that’s going to get them back on the court this weekend calls for making all NBA arenas available as polling places this fall. That’s a noble solution, but, ah, isn’t it mainly Republicans who are voting in person this year? Democrats are drifting towards mail ballots — although I suppose the scare that the Postal Service has given people over the past few weeks might make in-person voting newly attractive to liberals.