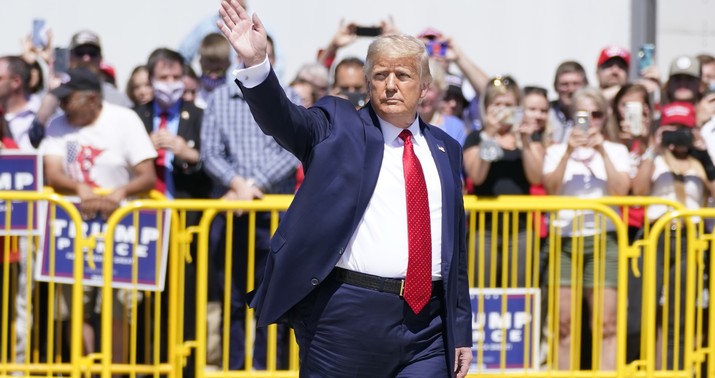 For two reasons these polls are hard to compute, at least at first glance. One is that Trump famously won Pennsylvania in 2016 but couldn’t quite get over the hump in Minnesota. Logically you’d assume that if he’s poised to swipe MN this year, he’d have a reasonably solid lead in PA right now. That’s not what we’re seeing at the moment. In fact, in RCP’s polling averages of the two states, Biden’s margin in Minnesota (5.3 points) is slightly smaller than it is in Pennsylvania (5.7). How did that happen?

The other reason is that Biden continues to enjoy a gaudy national lead, topping Trump by an average of 7.6 points. Some polls, most notably CNN’s, have had the race tightening lately but YouGov’s newest has Biden comfortably ahead, 50/40. Echelon Insights, a polling firm co-founded by Republicans Kristen Soltis Anderson and Patrick Ruffini, has Biden up 53/39 in its latest.

How the hell could he lead Trump by 14 points nationally and be tied with him in the bluish state of Minnesota? Someone’s clearly wrong. By a lot.

Lay all of that aside for a second and let’s look at the numbers. The Minnesota data comes from Trafalgar, the pollster that nailed Trump’s upsets in the Rust Belt four years ago. Trafalgar is a Republican firm as well and consistently produces rosier numbers for the president than nearly anyone else. Is that because they have special insight into how “shy Trumpers” are voting or is it because there’s a Republican lean to their polling that’s distorting the true picture of the race? We’ll know in about 80 days.

You’re left staring at that graph, wondering which candidate would benefit if all of the third-party voters sucked it up and decided to vote for either Trump or Biden. The fate of the state’s election and maybe the presidency depends on the answer.

Biden drew support from 49% percent of likely state voters and 45% backed Trump, when those leaning toward a particular candidate were included. That four-point gap is within the poll’s margin of error…

Trump is buoyed in the key swing state by voters who say the economy is their top concern and overwhelmingly perceive their personal economic situation as the same or better than it was when he took office, said Chris Borick, director of the Muhlenberg College Institute of Public Opinion…

Voters’ views of Trump have remained largely consistent throughout his campaign and presidency. In the latest matchup, only 4% said they were undecided on whether they would pick Biden or Trump. When those undecided voters were asked if they are leaning toward a candidate, 26% said Biden, 9% said Trump, and the remainder were still unsure.

Trump’s in Scranton today, where Biden was born but which happens to be Trump Country in Pennsylvania. He leads in the northerneastern part of the state, 61/28. That last bit from the excerpt suggests that the race might not be as close as it seems, though. There may be a net one or two points left for Biden among undecideds.

Anyway, back to the first mystery described up top. How is Trump faring better in Minnesota right now than in Pennsylvania? For starters, remember that even though the two states went to different candidates in 2016, the margins in each were exceptionally tight. Trump won PA by less than a point, Clinton won MN by a point and a half. They were both coin-flips, basically, so it’s not that weird that his position in the state he lost would be better now than in the state that he won.

One possible explanation for why he has less traction in Pennsylvania at the moment is because it is, after all, the state in which Biden was born. That might not be worth much in Scranton itself but a connection to the nominee may mean a little something across PA. Another possibility, though, is that Democrats are facing a special challenge in Minnesota due to the riots after George Floyd’s death and the inane efforts to defund the Minneapolis police department. Trump’s “law and order” message may have unusually strong appeal to Minnesotans under the circumstances, enough so to momentarily make the state more competitive than Pennsylvania is.

Which is a big, big, big deal potentially for the election. Amateurs like me who watch the race casually tend to assume that if Biden rebuilds the blue wall in the Rust Belt, it’ll necessarily mean that he’s overperformed Hillary and won’t lose any of the states she won in 2016. Hitting the trifecta in the midwest — Pennsylvania, Michigan, and Wisconsin — would give Joe 278 electoral votes, enough to win even if Trump holds every state he took in 2016.

But what if that assumption about Biden holding all of Hillary states is wrong? What if Minnesota, the most competitive blue state this year, actually slips from Biden’s grasp? In that case, we’d end up with a (gulp) 270/268 election, with Donald J. Trump the winner.

It’s unlikely. If you were gambling, you’d bet that if Biden’s doing well enough to flip multiple red states on November 3, he’s on his way to victory. But anything can happen in 2020. And enough has already happened this year in Minnesota to maybe make the state go its own way this fall.

As for the second mystery, how Minnesota could be tied when Biden’s leading many national polls by 10 points or better, I don’t think there’s an answer. That’s not a case of a logical circle needing to be squared, it’s a case of someone’s numbers being off. Either Trafalgar’s overestimating Trump’s support in MN or various pollsters like YouGov and Echelon are grossly overestimating Biden’s support nationally. Polling experts seem pretty confident this year that huge numbers of “shy Trump voters” aren’t being overlooked in samples. Stay tuned.

Is Chris Wallace a White Supremacist?