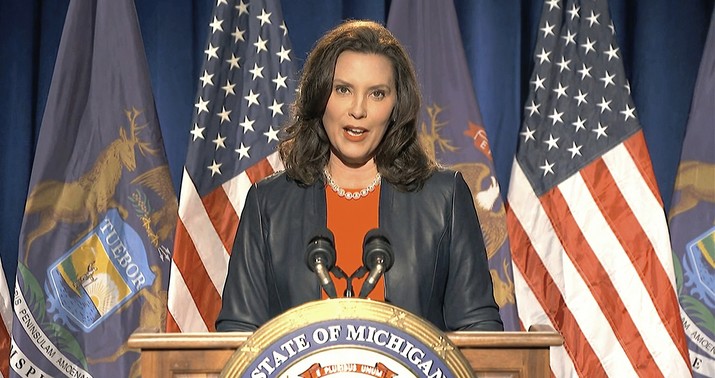 I’m skeptical. Whitmer’s up for reelection in 2022, isn’t she? “Prevented Michigan from playing college football” doesn’t sound like a solid reelection pitch to me.

Pretty good presidential pitch, though! They’re a dreadful program. Until they fire Harbaugh, the country’s better off shutting them down.

Jeff Snook is an Ohio State “insider” who claims the Buckeyes are trying to do an end-around the Big 10’s ban on football this fall by organizing a mini-conference of five or six teams. Schools would play each other twice, home and away. OSU wants Michigan to be part of that mini-conference for rivalry purposes, but supposedly Whitmer is dead set against college (or high-school) football being played in her state this fall.

To update you on my report from late last night that Ohio State Athletic Director Gene Smith was working to salvage a fall football season, Smith is now publicly denying it. But a credible source reiterated today that it very much was true, and as I wrote, Ohio State, Iowa, Nebraska and Penn State were on board and needed two more Big Ten teams to join them for a six-team, 10-game format that would begin in either late September or early October.

As I wrote, this group needed “to flip” the presidents at Michigan and Wisconsin to agree to play, or the new format wouldn’t be feasible. If either of those school’s presidents, or both, refused to budge and made that clear to their athletic directors within the last “24 to 48 hours,” then Smith’s efforts concerning the new plan went nowhere and died…

I also was also told that one roadblock to the new plan is the fact that Michigan Governor Gretchen Whitmer has been vehemently opposed to football being played – at the high school and college level – in the state this fall. Ohio Governor Mike DeWine gave his blessing to all sports being played this fall on Tuesday.

Is Governor Karen really that adamantly opposed, or is she just a convenient scapegoat for the school presidents and AD’s who are trying to make this happen but meeting resistance from some of their colleagues? After all, there were reports last week that the presidents of Big 10 schools had voted 12-2 to postpone the fall football season, with only Nebraska and Iowa dissenting. That report was later challenged, with participants insisting that no formal vote was taken, but where’d the 12-2 figure come from? Sounds like the consensus formed was pretty strong. Did the incoming president of OSU, Kristina Johnson, change her mind later about not playing — possibly after the Buckeyes’ star player, Justin Fields, got a petition going on proceeding with the season that’s drawn nearly 300,000 signatures?

I’m unclear on whether this mini-conference could even happen legally without the Big 10’s permission. When Nebraska made noise about possibly playing this fall despite the conference’s ban on the sport, the commissioner said that would cost them their membership. If the titans of the Big 10 insist on playing, though, maybe the calculus changes. What’s left of the conference if Ohio State and Michigan say “bye” and join the Big 12 or whatever?

From a liability standpoint, maybe the Big 10 has no choice but to stand its ground. WaPo published a long story two days ago about tort lawyers circling overhead, waiting to swoop down on schools — and conferences — that proceed with football this fall. If anyone ends up debilitated or dead from a COVID outbreak that’s suspected to have originated within the team, negligence will be claimed. That won’t be a slam dunk, as teams will no doubt take some reasonable precautions to try to keep players safe. But the athletes’ attorneys will claim that it was negligent to proceed with a season in the first place after conferences like the Big 10 weighed the risks and deemed them sufficiently alarming to cancel play initially.

In theory the schools could get around that by having players sign liability waivers, but the NCAA has prohibited it. The defense would boil down to claiming that the players knowingly assumed the risk by participating, but that could get tricky too: “The NCAA has required that universities honor the scholarships of athletes who opt out of the season because of health concerns. However, athletes could still fear sitting out because of the power imbalance between them and their coaches. They might worry that when they return for the 2021 season, they could have fallen out of favor with the staff that controls their playing time.” How much “choice” about opting out does a player with professional aspirations have if the team says “you’re playing”?

Snook’s report may be mostly hype. Penn State coach James Franklin doesn’t sound optimistic about football being played — at least not this fall:

James Franklin agreeing with Ryan Day on model for winter season: "I think it needs to be more of a winter season than a spring season. The later you go into the year, that’s going to impact the following season." Key factors are incoming recruits, NFL draft timeline. #PSU

Winter could be a different matter. Reportedly the Big 10 is looking at starting the season in January, which makes little sense in terms of the pandemic but lots of sense in terms of the NFL schedule. Nick Saban warned this week that a season played in the spring would likely result in pro prospects opting out en masse, not wanting to get hurt before the draft (or put their bodies through the pain of college football only to have to turn around and play with the pros less than six months later). The draft itself is an obstacle, as that takes place at the end of April. How are pro teams supposed to form a fully informed judgment about a player if the college season is still ongoing?

Bear in mind that this debate is taking place in the context of three major universities having been forced to abandon their plans for in-class instruction this week after COVID outbreaks erupted immediately after students returned to campus. North Carolina, Notre Dame, and Michigan State have all pulled the plug for the next few weeks at least. “The timing of Monday’s email wasn’t ideal,” said BuzzFeed of UNC’s announcement. “In less than two hours after it was sent, the deadline would pass for receiving a 95% refund for fall tuition.” Imagine paying full freight for a semester on campus for your kid, only to be told two hours before the refund deadline that that might not be happening after all.

America’s parents are pissed that they’re not getting a break on costs as classes move online. And students are stuck choosing between remote learning and, uh, maybe dying. “We all should be emotionally prepared for widespread infections — and possibly deaths — in our community,” said one dean at Yale in an email to students last month. “You should emotionally prepare for the fact that your residential college life will look more like a hospital unit than a residential college.” What a perfect backdrop for college football fun this fall.

.@ABC NEWS EXCLUSIVE: Ohio State quarterback Justin Fields speaks with @michaelstrahan about his “We Want to Play” petition and why he says players feel safer inside their training facilities. https://t.co/K88Cs77f3a pic.twitter.com/iuT1VCGl3Q

Is Lindsey Graham seriously in trouble in his South Carolina Senate race?

The coming crisis in Louisville

The natives are more than restless

Ruth Bader Ginsburg will be first woman to lie in state at U.S. Capitol

Also at the Supreme Court.

“We don’t need to open that up for whatever length of time, so that whoever this nominee is can be Kavanaugh’d, or Borked, or Thomas’d.”