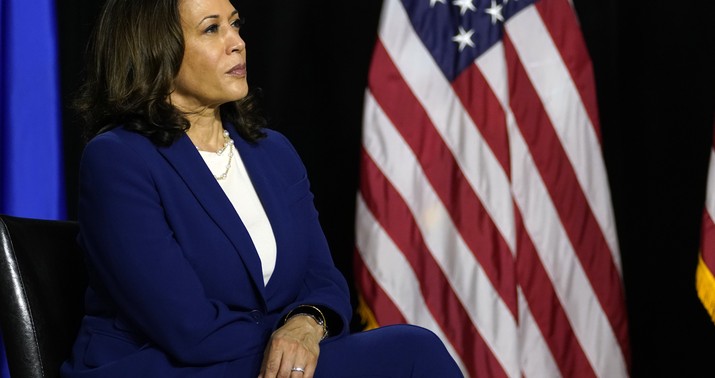 My favorite example of the media’s turnaround on her was the Times’s use of this photo for its front page reporting the news that she’d been chosen as VP. She cuts a striking figure — outlined against a clear blue sky, gazing off in the distance at a promising future for America, sharply dressed in a natty scarf. Quite heroic!

But a Twitter pal with a long memory remembered that that was the same photo the paper used for its story in November titled … “How Kamala Harris’s Campaign Unraveled.” In that pic, which was horizontally oriented instead of vertically, the vacant space all around her makes her seem small and lonely, almost a little confused. She’s not a visionary boldly charting a course there. She’s wondering, “How did I get here? Which way do I go?” Or at least, that’s what the photo editors wanted you to think.

Anyway, kudos to Jack Shafer for throwing a flag on his industry for an especially glaring effort to rehabilitate a failed politician. Although I’m going throw a flag on him too by pointing out that the most obvious reason for their reversal isn’t mentioned in his piece. He writes interestingly about the press, as always, but the fact that most reporters have a rooting interest this fall that’s even more intense than usual goes unnoticed. The success of the Democratic Party now depends in part on convincing the American public to respect and admire Harris. That’s the basic, basic reason why she’s gone from pathetic to heroic in the span of nine months.

Remember Harris’ inability to connect with Black voters? Never mind. Now the New York Times reports “that she could reinforce Mr. Biden’s appeal to Black voters and women without stirring particularly vehement opposition on the right or left.” Harris has “excited Democrats with a personal story” of being the female offspring of two immigrants, the New York Times notes, one from India and one from Jamaica. It’s true, she’s unquestionably a unique figure in American politics, a pioneer in several ways. It just omits to mention that this all somehow failed to register with Democrats the first time around.

“In many ways, Harris, 55, is a safe pick—broadly popular in the Democratic Party and well acquainted with the rigors of a national campaign,” the Los Angeles Times now says. But based on what? Her so-called broad popularity in the Democratic Party did not extend to donors, who gave her candidacy a bye, one of the main reasons she gave for closing her presidential campaign. As for the rigors of campaigning, she usually performed well in the early minutes of an event but lacked staying power. As the Washington Post’s Paul Waldman wrote when Harris left the race, she never conveyed a convincing reason for running for the presidency outside of simply wanting the job.

According to the New York Times’ revisionist view, Harris possesses “a gift for capturing moments of raw political electricity on the debate stage and elsewhere,” but neglects to mention in that passage that her so-called gift contributed to her political electrocution when she went at Biden so hard on busing and race.

“Yesterday, Harris was just another overbaked politician. Today, she’s fresh as can be, and the press corps can’t stop salivating,” Shafer writes, accurately. He attributes that to several factors, all also accurate: The press is bored with the race and excited to have something new to write about; they expect Biden to win and figure slobbering over Harris now will help ensure their access to the next White House later; they have a “sportswriters’ approach” to politics in which a player who loses is criticized for their flaws whereas a player who wins is praised for their strengths. Harris went from loser to winner, and thus so did the coverage.

Oh — and the left also needs the electorate to like her or else they might end up stuck with four more years of Trump. That’s another reason, one that didn’t make Shafer’s cut.

I’ll repeat what I said a few days ago, though, about why slipperiness as a presidential candidate might be a liability whereas slipperiness as a VP nominee might be an asset. The fact that no one could pin Harris down on policies like Medicare for All in the primary was a good reason for neither wing of the party to support her. Whereas the fact that no one can pin her down on policies as the nominee’s running mate is a good reason for neither wing of the party to object to her. Progressive opinion about her varies, but the balance of it thus far seems to find her acceptable precisely because she’s a weathervane who can be muscled if she ends up in the top job. She’s a liberal, but whether she ends up as a fake Bernie-style progressive or a Biden-style pragmatist depends entirely on which direction she senses the electorate is moving. The left thinks it has momentum; if they’re right, President Kamala will be a leftist too.

The progressives I spoke with don’t really care if those moves were genuine or motivated in part by politics. They just want Harris to make more of them. “Her collaboration with AOC on the Climate Equity Act shows that she can take some fairly left-wing and justice-oriented conversations to the highest office in the land, and that’s a good thing,” NoiseCat said.

Others framed her leftward shift more cynically: “While her penchant for taking positions broadly palatable to the corporate donor class raises concerns about her dedication to progressive principles, her habit of aligning her stance with the prevailing political winds gives us some hope,” the leaders of RootsAction.org and Progressive Democrats of America said in a statement yesterday.

She’s not an ideologue, she’s a careerist. Every faction of the party can work with a careerist. Morning Consult’s new poll finds 85 percent of Democrats and 82 percent of self-described liberals at least somewhat approve of Harris’s selection. Views of her have improved as well among suburbanites, a key bloc for both parties this fall. Before she was picked as VP, they split 35/36 on whether they viewed her favorably or not. Now they split 45/39. Maybe that’s a pure “bounce” effect, or maybe the reaction is more like “I don’t know what she believes and I keep hearing conflicting things, so I guess she’s fine? Left, but not Bernie-esque?” This seems to bear that out:

I suspect that’s about right in terms of where she and Biden *actually* stand. In terms of where they might end up if they sense the political winds are blowing leftward, I’d place Harris considerably closer to 1 than Biden. Biden’s an incrementalist. Harris is a “whatever wins”-ist. That’s why she became a phony DSA-er in the primaries to begin with, because she thought you couldn’t win over progressives and become the nominee in 2020 if you weren’t one.

The Morning Briefing: Amid All the ACB SCOTUS Talk, Barbara Lagoa May Be Trump's Trump Card

Trump’s ricin attacker, an illegal alien, has an interesting history