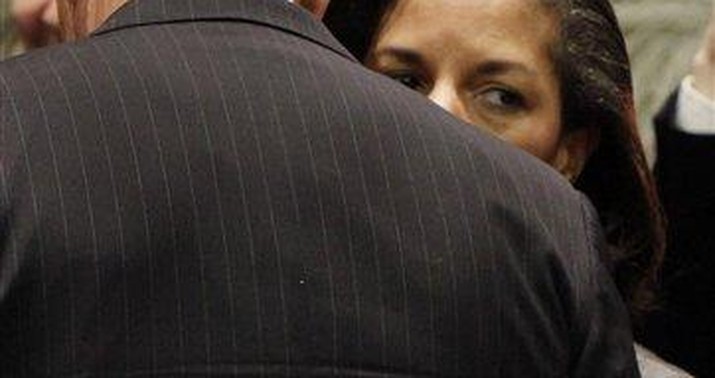 The sourcing here is an inch thin, but what the hell.

Jon Cooper formerly chaired a Democratic Super PAC and was part of a “Draft Biden” outfit in 2016. His Twitter avatar is a photo of him with a smilin’ Sleepy Joe. Beyond that, we have no reason to believe this is true. As far as I’m aware, not a single media outlet has corroborated it — and they’re working their sources hard to do so, no doubt. But again, it’s Friday:

Eh, anyone can offer a single tea leaf. What we need to justify a full-blown “Rumor!” post is something more, a clue as to who Biden’s choice might be.

Do we have one?

Netflix director (and possible VP pick?) Susan Rice exercised her stock options in the streamer this week, and subsequently sold all the shares, netting her a gain of about $300,000 https://t.co/I0wyWWDIwM

Not to read too much into the tea leaves here, but this appears to be the first time she has exercised her options since joining the Netflix board a couple years ago. Again, this was pursuant to a trading plan, so set before today.

A would-be VP will have to start divesting in order to avoid conflicts of interest unless Biden plans to run his government the way Trump runs his, which hopefully he won’t. Rice’s sale of Netflix is also notable not just because she’s an investor but because she’s a director. If she’s expecting to have a new job soon, obviously she’d need to begin the process of stepping away from her current one. This is a step.

And if she’s expecting trouble in reconciling the left to her nomination, the less invested she is in corporate America, the better. Her Netflix shares are by no means the most “problematic” part of her portfolio:

[In 2012], Rice’s financial disclosures showed that she and her husband — scion of a wealthy Canadian family — owned as much as $600,000 worth of stock in TransCanada, the company that owned Keystone [Pipeline XL]. She held stock in TransCanada and other fossil fuel companies for the entire eight years she served in the Obama Administration…

Rice’s first financial disclosure as an Obama White House official, filed in 2008, formed a parade of horribles for progressives. Her investments ranged from fossil fuels and large financial institutions to pharmaceuticals and holdings in Las Vegas casinos owned by the Republican megadonors Sheldon Adelson and Steve Wynn.

The left doesn’t want Rice. She’s rich, she’s neoliberal on foreign policy, she’s a question mark on domestic policy. Her one redeeming virtue is that she should be comparatively easy for a progressive to beat in a future primary. They don’t want Kamala Harris either, though. She’s been slippery on domestic policy, her record as California AG is checkered on criminal justice reform, and she has plenty of rich friends. She could also be hard to beat as a sitting VP in 2024 or 2028. And so, to my amazement, there’s still a last-minute progressive push for Karen Bass despite the obvious problems she would cause Biden in Florida on the ticket:

Nina Turner, Bernie Sanders' 2020 campaign co-chair, is among the signers. “Congresswoman Bass would make an excellent VP," she said. "She has a record of building coalitions, especially during turbulent times, and this skill set is absolutely needed in this critical moment."

You would think at this point lefties would want to tone it down on Bass, knowing that she’s unlikely to be the pick and not wanting to make things more awkward for the eventual nominee by signaling that Rice or Harris is a second choice at best. But here they are, still lobbying.

I’ll leave you with this, which is wise but might earn Pelosi a wrist-slap from lefties at a moment when Biden is poised to add a black woman to the national ticket for the first time in American history.

PELOSI on MSNBC: "I don't think it matters who the vice presidential candidate is historically. It has never mattered. Lyndon Johnson for victory, Sarah Palin for defeat, but by and large, it's really all about the two candidates for president."