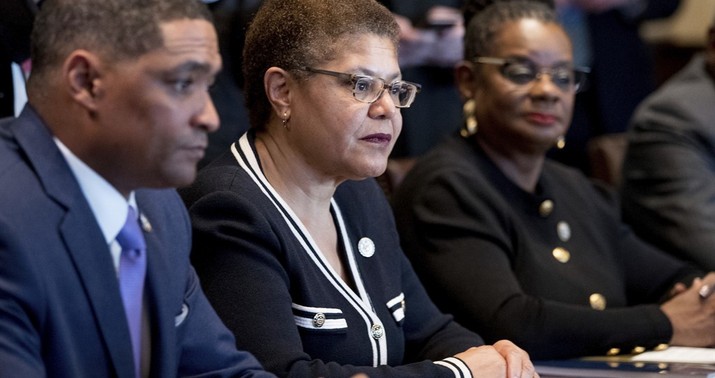 An amusing leftover from yesterday. For a politician, this is like having to put a statement affirming that you’re not a child molester.

If you’re in a position of having to formally deny it, you’re already sunk.

In fact, the denial may have lost Karen Bass more support than it gained her within the party. Centrists won’t believe her. And Berniebros will be disappointed.

“I’m not a socialist. I’m not a communist. I’ve belonged to one party my entire life and that’s the Democratic Party and I’m a Christian,” Bass told NBC News.

As Bass has emerged as a potential vice presidential pick, Republicans have seized on Bass’ history of visits to Cuba.

Well, at least she’s cleared it up. Now we can move on to other subj—- [record scratch]

She said she wasn’t a communist. She didn’t say anything about slobbering repeatedly over dead communists.

My theory of Bass ascending to the top tier of Biden candidates is that she’s not under serious consideration. Her praise for the “Comandante en Jefe,” Fidel, means she’s a nonstarter in Florida. I think Biden added her to the top tier as a concession to House Democrats and to leftists, both of whom like her and might feel gratified to see her given a little media attention. Which makes this episode that much more enjoyable: Imagine Biden turning on the news to find that a candidate whom he elevated as a courtesy to allies is having to reassure people that she’s not a communist. Trump’s doing everything he can think of to frame Biden as a tool of left-wing radicals and now here’s Bass, who probably has zero chance of being his running mate, forcing the party to grapple publicly with the question of how much praise for Castro is a little too much.

Although there’s an eight-dimensional-chess possibility too. A lot of people around Biden seem leery of pulling the trigger on making Kamala Harris veep. Elevating Bass as a dark horse at the last minute and knowing that the GOP would jump all over her for her Castro comments might make Harris an easier sell. “Ah, geez, you know, we liked Bass a lot but these damned Republicans are going crazy with the Cuba stuff and, well, maybe we should just go with Kamala as the safe choice after all…”

Oddly, Bass seemed not to have anticipated that she’d be attacked for her history with Cuba once she vaulted into the top tier. A few days ago she claimed that her views of Castro had “developed over time,” but she issued her “Comandante” statement just four years ago. It took her until her 60s to fully appreciate that Fidel was a bad guy? And Politico reporter Marc Caputo notes that when he first raised questions about Bass’s viability as a running mate in Florida back in June, her office stood by the 2016 “Comandante” statement. She’s running away from it now but it’s completely unconvincing.

Henry Olsen wonders how a Republican VP candidate would be received if he had traveled several times in his youth to apartheid South Africa and spoken warmly of P.W. Botha. Would “I was never pro-apartheid” suffice? It’s a fanciful example because the left’s take on Castro’s legacy was, is, and largely continues to be that it’s “complicated,” not evil like South Africa’s institutional racism.

Ramesh Ponnuru made a shrewd point a few days ago about Biden’s VP hunt. Team Joe has run a good campaign thus far mostly by doing very little and doing it as low-key as possible, giving Trump maximum freedom to keep an unflattering spotlight on himself. But the way he’s searched for a running mate increasingly seems like an unforced error, particularly his declaration months ago that his choice would be a woman:

It narrowed his options — and may have narrowed them more than he had intended. Once it was a fait accompli that his running mate would be a woman, attention naturally turned to whether she would be white or nonwhite. At this point, selecting a white woman would be a letdown rather than a (third) chance at a historic first.

It reduced the value of the selection in another way. If he selected, say, Senator Kamala Harris after giving consideration to a large field without demographic restrictions, he could have said that she was the best of all of them. If he selects her now, she’ll be the best he could do among a small list of nonwhite women.

Another mistake is that he’s dragged out the process too long. Initially it was supposed to be over by August 1, then the first week of August, now it’s the second week when he’ll decide. The extra time has given supporters of each of the top candidates an incentive to double down on backbiting and lobbying the press on behalf of their favorite, making the process “messier than it should be,” as one Biden ally told WaPo. It also makes it seem as though Biden has deep misgivings about all of the shortlisters and just can’t get to yes on any of them. “The increasing nastiness is fueled by a sense, even among Biden’s closest advisers, that Biden is entering the final phase of the search without a clear favorite,” WaPo notes, highlighting the fact that he’s expecting to interview five or six candidates next week before choosing instead of two or three. Result: Whomever he selects will come off as the person he was least reluctant about rather than the one he was most enthusiastic about.

Increasingly it seems like the shortlist is down to Harris, Bass, and Susan Rice. There’s still chitchat here and there about Tammy Duckworth, Elizabeth Warren, and Val Demings, but the first three are the candidates most frequently mentioned in the press. Bass, as I say, is a nonstarter. Rice is unlikely too, I think: Read this Dana Milbank column from a few days ago describing her as “a human lightning rod” with a knack for making enemies. He claims that even one of her former senior colleagues in Obama’s administration believes she wouldn’t “wear well” as a candidate. If Bass is out and Rice is more trouble than she’s worth, then it’s pretty clear who the nominee will be. Biden’s trying not to accept the inevitable with Harris but in the end he’ll have no alternative.