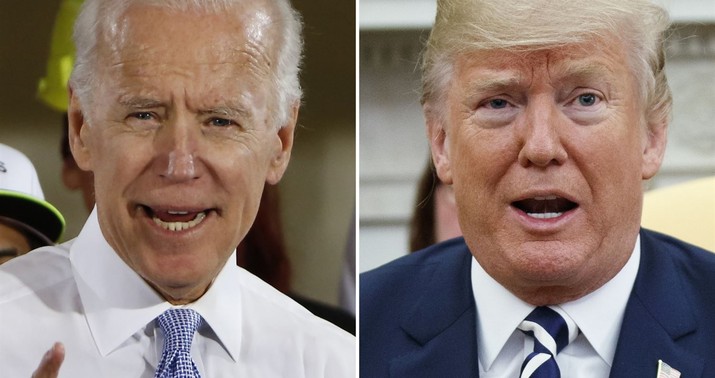 I didn’t think I’d ever write these words again in my life but here they are: Rudy Giuliani sounds perfectly reasonable here.

And you know what? There’s enough for both candidates to like about the idea that I think Biden might just accept.

If nothing else, accepting the offer might confound the Trump campaign. Presumably one reason this proposal was made was the expectation that Biden would say no, handing POTUS a chance to gloat that Sleepy Joe’s afraid to debate with less time to prepare than he was counting on because he knows he’s not up to the task. Democrats could deprive Trump of that and throw him a curveball by having Biden reply, “Anytime, anywhere.”

Strategically, though, there are reasons why Biden might prefer to debate sooner rather than later.

That’s a … surprisingly fair point, Rudy! If we’re going to encourage Americans to vote early by mail, and by “we” I mean “every official in the country on both sides except Trump” (not including Florida), we should want those votes to be as informed as possible as soon as possible. If Biden’s destined to drool on himself at one of these things, let’s give him an opportunity to do so before the first ballots are mailed so that we don’t end up electing someone who’s unequal to the duties of the presidency.

The reason Team Trump wants an early debate is obvious. He’s down big right now and needs to change the trajectory of the race at the earliest possible opportunity. Moving the debates up gives him that opportunity. If Biden performs terribly, the election could be competitive again by mid-September.

By the same logic, one would think, Team Joe should want to hold the debates late. Let the early voters and mail-in voters bank their votes first! Then, if he performs terribly, there’s nothing that can be done to get those votes back. If you’re sitting on a seven-point lead nationally, you want to cash in as much of that lead as you can before handing your opponent a chance to shrink it.

That logic is so compelling that, I assume, Biden will reject Giuliani’s offer. But it’s not a slam dunk. There are reasons why he might prefer an early debate too:

1. It would signal that he’s not hiding from Trump or afraid to talk policy in front of the country for fear of what conclusions might be drawn about his mental acuity. Democrats might be heartened by the sight of him boldly accepting the Republican challenge.

2. If Biden did well at the first debate, it might seal the election. There may be voters who are leaning towards him, intend to vote early, but are still a bit reluctant to cast their ballot until they see how he handles a debate. If he proves himself early, it might trigger a wave of voting in his favor that all but locks things up before the end of September. Then, if we get a great jobs report in early October, or some promising vaccine news, or even a bad Biden performance at the second debate, many millions of votes for the Democrat will have already been locked down. He might essentially neutralize any October surprise Trump has planned.

3. Biden’s entire strategy to this point has been to stay out of the spotlight and let Trump continue to damage himself with his daily Trumpiness. He can’t do that forever — he has to debate — but certainly he’ll want to be out of the spotlight to whatever extent possible during the final weeks of the campaign, when late deciders finally make up their minds. If they hold the final debate in late October and Biden blows it, that may upend the election. They’ll walk into the booth with a sense of Biden’s incompetence fresh in their minds. Whereas if they hold the final debate a week or two earlier and Biden botches it, undecideds may take a second look at Trump and then gradually or suddenly have their attention steered back towards some form of Trump malfeasance. Dems want a referendum on Trump this fall, not a “choice” election. Getting the debates over with and steering late deciders back towards a referendum mentality helps with that.

4. Nate Cohn makes an excellent point. Democrats are scrambling to convince casual voters not just to support Biden but to get their ballots in early to ensure that they’re counted in time for Election Day. The earlier the debates are, the more of a wake-up call it’ll be to those casual voters to get cracking. It might even help with registering new voters.

One possible argument: the last debate is just ten days or so before the election. Some people won’t make up their minds until after the last debate. If you’re worried about mail ballot returns being too late, then you want them deciding–and mailing in ballots–earlier.

It is quite clear that new registration numbers are low this year, likely to the disadvantage of Biden. I'd guess that's in part because people are less likely to move right now. But others could use an early prompt

The real risk for Biden in moving up the first debate, I think, is that it’s a long time until the second one under Giuliani’s proposed schedule. Under the current schedule there are 17 days between debates one and two; under the Giuliani scheme, there’d be 25. If Biden screws up in the opening debate, he’ll have to wait a long while for a chance to undo the damage, a period during which many Americans will be voting. For his team, I think the decision on whether they should accept or not comes down to how confident they are that he’ll do well. It’d be one of the highest-stakes debates in U.S. history, a chance to put the race away before Labor Day or to open the whole thing up.

By the way, Rudy also suggested some moderators — and many of those (Bret Baier, Major Garrett, David Muir, Norah O’Donnell) were reasonable too. What’s gotten into him?