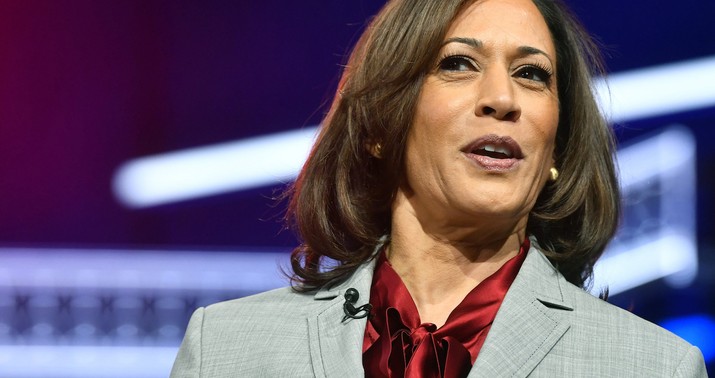 That was my guess in last night’s post too. The reporting lately has made it seem as though there’s a final three — Harris, Rice, and Karen Bass — but if Bass’s Castro baggage hasn’t already buried her, the oppo that’s been dropped in the past 24 hours will finish her off. Politico reported that she warmly eulogized a former top official in the U.S. Communist Party as a “friend and mentor” a few years ago. Today Politico dinged her again, noting that her excuse for speaking at the opening of a Scientologist church in 2010 was a lie. I spoke there because the church was in my state assembly district, Bass had claimed. The church wasn’t in her district, it turns out.

Even if Biden wanted to spend the rest of the campaign answering questions about whether his VP is a pinko, which he doesn’t, Bass’s bungling response to the dirt that’s been dug up on her shows she’s not ready for primetime. She won’t be the pick.

And then there were two:

Confidants of Joe Biden believe his choices for vice president have narrowed to Sen. Kamala Harris and Susan Rice — and would be surprised if he picks anyone else.

The state of play: This is a snapshot of the nearly unanimous read that we get from more than a dozen people close to him…

Rice is getting a big bounce from Obama people who claim her presence on the ticket would guarantee the enthusiastic presence of both Barack and Michelle Obama on the campaign trail.

If the contest comes down to a popularity contest with Obama alumni, Rice has an edge — and Rice allies point to her White House experience.

It’s not just Team Obama that has its fingers crossed for Susan Rice. She has a cheering section of sorts on the right as well:

Joe Biden still may be undecided about whom to pick for a running mate, but Donald Trump’s team knows exactly whom it wants: Susan Rice.

Trump’s aides and allies accuse Rice — without delving too deeply into the evidence — of helping cover up crimes for two of the president’s favorite foils, Barack Obama and Hillary Clinton, making her just the kind of “deep state” villain who could fire up his MAGA base.

“She is absolutely our No. 1 draft pick,” a Trump campaign official said.

“I can’t think of anyone that is more polarizing who would fire up the base than Susan Rice,” former congressman turned Fox News personality Jason Chaffetz said. That’s one reason she’d be an odd pick. Biden’s strategy to this point has been to lull the electorate as much as possible, knowing that that makes it much harder for Trump to reprise his “lesser of two evils” strategy from 2016. Deprive swing voters of grounds to dislike him and GOP base voters of grounds to turn out against him and he’s hard to beat. Choosing Rice could wake those groups up.

It’s also strange that he’d consider Rice at a moment when John Durham and Bill Barr are finishing up an investigation into the Russiagate probe. Even if Rice turns out not to be a major player in their findings, having two Obama administration alums on the Democratic ticket instead of one potentially deepens Biden’s exposure to any electoral backlash. With Rice on the ticket, it’s easier for Trump to claim that the Obama White House tried to sabotage his presidency from the start and now they’re trying to implement a full restoration, up to and including Susan Rice.

Josh Kraushaar makes a fair point too: “Several news outlets are reporting that Biden wants a lower-profile governing partner without any presidential ambitions of their own, an atypical approach for a party looking to anoint new generational talent for the future.” Right, one of the arguments for Biden this year among Democrats is that he’ll probably serve only one term, thus acting as a “bridge” to the next generation of Democratic leaders. Among the people who’ve made that argument is, uh, Joe Biden. If he chooses Rice, the 2024 Democratic nomination will be a free-for-all: Rice will be a contender, but with a thin record and an expertise in foreign rather than domestic policy she wouldn’t be a strong one. Harris as VP would be more formidable. Does Biden, a centrist, want a free-for-all four years from now, knowing how a leftist candidate might easily prevail? Or does he want to steer the party towards a more establishment choice by anointing Harris now? He can influence the direction of Democrats depending upon whom he chooses.

That’s a harder strategic decision for Biden than I’ve made it seem. The core message of his campaign is that America needs to undo the Trump presidency and revert to politics as it was circa 2015. Viewed that way, Rice is a logical choice: Let’s reinstate the Obama presidency to the fullest extent we can constitutionally by elevating VP Biden to the Oval Office and elevating NSA Rice to VP. But Biden’s also been at pains to reassure Berniebros and the rest of the left that it won’t just be neoliberal business as usual if he’s elected. He intends to put the country on a more progressive track, if not as progressive as Sanders would have. In that case, his VP selection calls for someone new, not an Obama retread.

Although, if the point is to signal a new leftward direction for Democrats and America, Warren is the logical pick, not a calculating squish like Harris. But Biden needs an African-American woman and Warren doesn’t qualify.

If the choice really is down to Rice and Harris, I think the farther ends of the political spectrum on both sides would prefer Rice. As noted above — and below — she’s more ripe for attacks by Republicans. And progressives would probably view her as mildly preferable to Harris precisely because she’s more beatable in the 2024 primary. In the end I think Biden will throw up his hands and choose the “safe” pick, Harris. She’ll do fine in a debate against Pence, which is really the VP’s only duty between now and Election Day. Exit quotation from Varad Mehta: “A process that excludes Amy Klobuchar but ends with Susan Rice as a finalist is a bad one.”

Video of the day: Woman tasered for not wearing a mask at an outdoor middle-school football game

Dems: On second thought, please don’t send your ballot through the mail

This Is Probably Why Joe Biden Called It A Day Before 10 AM Yesterday...And Hunter Might Be the Reason.

HuffPost: After Ginsburg died, I joined the Satanic Temple to fight for abortion rights

“I am not the type of person who would normally consider becoming a Satanist, but these are not normal times.”

“I’m being killed financially. This money is ’cause they hate my guts.”

McConnell: We’ll have a fair hearing for the SCOTUS pick, followed by a first-class confirmation

“It’s because year after year, decade after decade, the far left’s playbook stays exactly the same.”

“Mr. Durham’s staff members sought information about the debate over the subpoenas that the F.B.I. tried to obtain in 2016…”

“That has to be approved by the White House. We may or may not approve it.”

Axios: Guess why Democrats are pivoting away from mass mail-in balloting?

“For a lot of people, [California’s] losing its luster.”

Only San Francisco bound for Hawaii beginning in October.

AP Poll: BLM protesters have worn out their welcome

“I was supportive back in June, but after seeing everything up until now, I’m almost dead against them.”