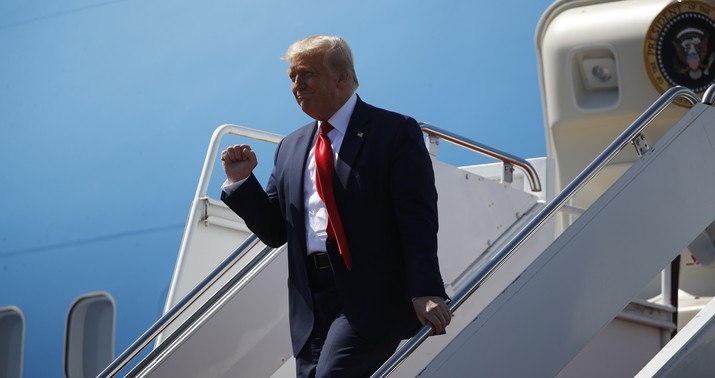 There are two polls out today showing a Trump surge, one a crazy outlier that contradicts virtually all other polling and the other a more interesting outlier that tracks with a trend in other polling. The crazy outlier is the one published by the Democracy Institute and Sunday Express that has Trump leading in Florida, Minnesota, even Michigan, and slightly expanding on his 2016 electoral vote haul of 306. That’s way, waaaay off of the battleground polling averages at RCP. In fact, Trump hasn’t led in a poll of Michigan all year.

Ask yourself: If there were a MAGA surge happening there, would Team Trump really have stopped buying TV ads in Michigan recently? They know which states are in play and which aren’t. So much for the crazy outlier poll.

The more interesting outlier is Rasmussen, which has Trump’s daily job approval rising to 51/47, his best number since before the pandemic began. How much can we trust Rasmussen, a firm whose numbers for Trump are frequently better than the competition’s? They got quite close to nailing the popular-vote margin of the 2016 election; two years later, they crapped the bed on the midterms. Ras typically finds Trump’s approval a few points higher than other pollsters do, often above 46 percent when he seldom touches that number in other surveys, but that may be explained partly by the fact that Rasmussen polls likely voters. Likely voters tend to trend more Republican.

The bad news for Trump and the GOP is that no other polling outfit has had him at 51 percent approval — ever. Unless I missed something in RCP’s long list of data on his approval rating, he’s hit that number several times in Rasmussen polling since 2017 but never once anywhere else. (He did touch 50 a few times earlier this year in the HarrisX/Hill poll.) Pretty outlier-y. What makes Rasmussen’s number noteworthy is that Trump’s approval has risen lately in the polling averages, which contradicts the media impression that he’s sinking further and further under the political weight of the pandemic.

Follow along with the dates at the bottom and you’ll see just how badly things deteriorated for him over the past two months, after the George Floyd protests broke out nationally and he staged that ridiculous spectacle in Lafayette Park. He’s regained enough ground over the past 10 days or so, though, that he’s now slightly above where his approval stood on May 27, two days after Floyd’s death. His recent surge in the average isn’t being driven entirely by Rasmussen either. Since late July he’s scored 44 percent or better in polling by Harvard-Harris, Change Research, HarrisX/The Hill, the Economist/YouGov, and Emerson. Forty-four percent approval was standard for Trump before the pandemic.

He’s gained a bit on Biden lately in the national head-to-head polling too. Not a ton; he’d still be a sitting duck if the election were held today. But the trend is in the right direction for him.

A month ago he had sunk to 40.0 percent against Biden, seemingly poised to have the bottom drop out. The Democrat led by 9.3 points at the time. Today Trump is back to 42.0 percent and Biden’s lead is down to 7.4 points. Before the pandemic Biden typically led Trump by five points or so, a margin that would all but guarantee a popular-vote victory but would leave the electoral college very much in doubt. We’re not far from that margin now.

What explains Trump’s (modest) surge back towards competitiveness? That’s not “supposed” to happen at a moment when COVID-19 looks as intractable as ever and deaths are climbing in the south and California. My guess is that it’s a backlash to news of murders rising in major U.S. cities. Crime in general is down this year (mostly due to the lockdown this past spring, one would guess) but murders are up in America’s urban centers: The WSJ has a story about the national trend out this morning to supplement the local trends being followed by local papers. Lefties will say “that’s happening on Trump’s watch!” Right, but he’s positioned himself as President Law And Order and the left has saddled Biden with “defund the police” baggage whether he wants it or not.

Relatedly, mass protests against racism and police brutality have fallen off. That makes it harder for violent unrest like the spectacle in Portland to hide in a crowd of more acceptable peaceful demonstrations. Americans were hugely sympathetic to the BLM protests in June after the initial wave of violence settled into something more traditional street marches and rallies. Now that there are fewer rallies, it may be that some swing voters are more focused on the vandalism and violence against police.

Whatever the explanation, the fact that Trump’s prognosis improved somewhat during a month of depressing COVID news suggests that his fortunes aren’t completely tied to the pandemic. His polling tanked during June, a month when America’s daily case counts declined, and then it rebounded in July, a month when those counts began to climb again. Either there’s a weeks-long lag between trends in the spread of the disease and the public’s reaction to it or voters have begun to treat COVID-19 as political “background noise,” with little movement in Trump’s rating driven by shifting trends. It could also be that his brief experiment with a “new tone” on the virus (wear masks! convention is cancelled!) helped him a bit, and that some sort of *big* shift in the trends — like, say, if America’s schools reopen in September and then need to close two weeks later due to major outbreaks — might drive his numbers one way or the other.

But the “background noise” theory isn’t necessarily good news for him. Right, it may mean that the electoral bleeding from virus politics has finally stopped for him, but it may also mean that his deficit against Biden has now “settled” at seven points or so and it’ll be harder to make it budge between now and November. That is, some undecideds may have rendered their verdict on his handling of the pandemic by giving him a thumbs down and they’re sticking with that no matter what the case counts and daily deaths happen to be week to week. “He has three months to win them back,” you might say. Eh, not really. More like six to eight weeks, after which many votes are banked. He needs this upward trend in job approval to continue — now. By October it might be too late for a turnaround.