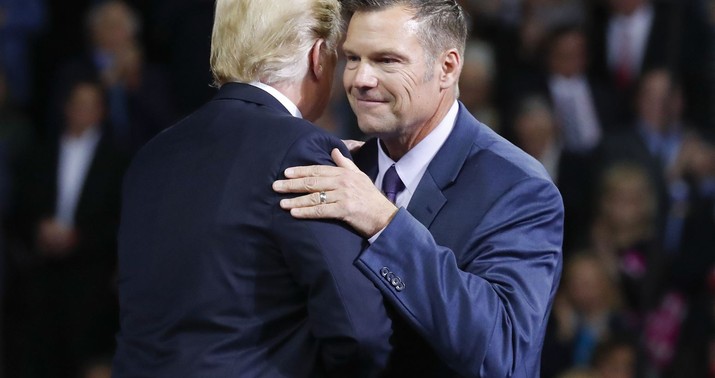 Just a reminder that the big vote is tomorrow night and that the fallout from the results is apt to be exceptionally nasty no matter what happens. How nasty? Go read this post from July 11 in which Kobach fan Ann Coulter was left pleading for a Democratic victory over Mitch McConnell this November as payback for his attempt to sink Kobach in Kansas.

Oddly, there haven’t been many polls of the race despite the potential national implications of the outcome. Rep. Roger Marshall is the establishment favorite, the “electable” choice in a red state that’s normally a walkover for the GOP. Kobach is the populist choice, deemed unelectable because he managed to lose the gubernatorial race there to a Democrat in 2018. The GOP establishment dislikes Kobach’s border-hawkery and fears that he’s a weak hand to play in a national climate that strongly favors Democrats right now. If Kansas flips because Kobach once again can’t beat a Democrat statewide, it could be a majority-maker for Chuck Schumer.

The problem is that the race has turned so acidic that there are apt to be hard feelings among supporters of whichever candidate loses. Kobach’s fans will understandably resent McConnell and the GOP Super PACs attacking their guy at the establishment’s behest; Marshall backers will resent Kobach for having secured a victory with help from Democratic organizations. (More on that in a minute.) Having some meaningful number of Republicans boycott the Senate race because they believe their candidate was a victim of dirty pool is an ominous possibility in a year when Trump reportedly isn’t killing it in Kansas against Biden either.

The stage is set tomorrow night for some bad vibes even by the standards of a year in which the vibes are nothing but bad. McConnell is reportedly “frustrated” that Trump won’t endorse Marshall, as that could make the difference in a tight race. But Trump is stuck, on the one hand not wanting to back a candidate like Kobach who received his endorsement in 2018 and lost anyway and on the other not wanting to alienate populists by trying to torpedo Kobach. He’s also reportedly been influenced by Ted Cruz:

That appeared to again be the case during the flight from Texas. One source said that Texas Sen. Ted Cruz chimed in during the conversation, reminding Trump that Marshall had initially supported then-Ohio Gov. John Kasich in the 2016 presidential race. Trump responded that he would not weigh in on Kansas’ Senate primary.

The charitable view of that intervention is that Cruz was just doing a favor for a fellow populist in Kobach. The less charitable view is that Cruz doesn’t care if Senate Republicans have a majority or not and is polishing his populist cred ahead of a second presidential run in 2024. He may even have leaked that story himself, although naturally he denies doing so.

Anyway. As best anyone can tell, the race is tight. “I think everybody working for Marshall felt pretty good for a while, but he’s not as comfortable as he was a week ago,” said one Kansas Republican to The Hill. Politico has numbers:

Internal Republican polling has shown a Trump endorsement would shift potential Kobach supporters towards the president’s pick, according to a Republican familiar with the data…

Recent polling has shown this year’s primary coming down to the wire. One recent GOP survey showed Marshall with 33 percent support compared to 30 percent for Kobach, with busienssman Bob Hamilton and former NFL player Dave Lindstrom trailing, according to multiple officials who described the poll.

Additionally, an internal survey conducted for the NRSC last week showed that in a general election matchup, only 54 percent of Republican primary voters would back Kobach, while 29 percent would instead to vote for Democrat Barbara Bollier, according to three people familiar with the data, which has been presented to the White House. That much potential crossover support for Bollier, who has the backing of major Kansas and national Democrats, could doom Republicans’ chances in the race.

I’m sure McConnell and NRSC chair Todd Young will spend some time tonight pleading with Trump to swallow his pride and back Marshall. (Marshall may have supported Kasich four years ago but Trump’s own VP supported Cruz, remember.) For now, the X factor in the race is a mysterious outside group called Sunflower State PAC. Here’s a sample of one of their ads, which rips Marshall and lightly “criticizes” Kobach in terms that seem designed to make him more popular with Kansas Republican primary voters:

Sunflower State has dropped nearly $5 million on airing its ads, big money in a state like Kansas. Try to contain your surprise upon learning that they’re linked to Democrats, “using an advertising firm that created commercials for Bernie Sanders’s 2016 presidential campaign and for a super PAC backing Joe Biden this year,” per the Atlantic. Clearly the Dems are trying to help Kobach across the finish line in the primary because they think he’ll be easier for their candidate to beat this fall. That strategy has worked before for them, most notably in 2012 when they helped Todd Akin win the Missouri Republican primary in the belief that he’d be the softest opponent for Claire McCaskill. (They were right.) Not all liberals are thrilled with the idea of their allies aiding Kobach for strategic reasons, though:

“You’re playing with fire here,” Frank Sharry, the executive director of America’s Voice and a longtime advocate for immigration reform, told me in an interview. “He’s not a stooge to be lifted in the hopes of winning a Senate seat,” he said of Kobach. “He is the devil incarnate, and we’ve got to put a stake through a heart at every opportunity. So we’re not going to be contributing to this group or patting them on the back.”

We’ll know in 24 hours if the Democrats’ investment in Kobach paid off for them. Trump can waste the money they’ve spent in the state with one tweet tomorrow morning by endorsing Marshall, but if he was going to endorse he presumably would have done so already.

I’ll leave you with another ad from Sunflower State. Exit quotation from Kobach: “When I do win this thing, God willing, I will be even more loud and make more noise than I would have otherwise. Okay? Because they’re going to pay for this.”