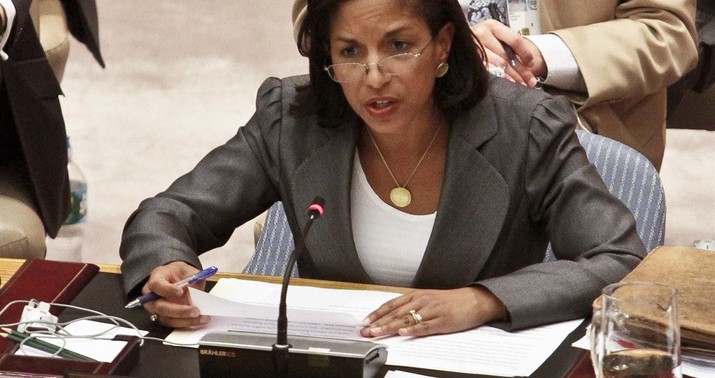 I find this hard to believe for the simple reason that she inspires more negative feelings on the right than she does positive feelings on the left. The cliche is true, especially this year, that the first job of the VP nominee is to do no harm. Rice would do harm by providing Trump with something he desperately needs and has lacked for months: A target to aim at. Biden would be better off with the blandest candidate he could choose within the parameters he’s set for himself in order to further advance his strategy of making the election a referendum on Trump. Injecting Rice into the mix would invite the president to revisit all manner of righty grievances against the Obama administration, from Benghazi to the Russiagate unmasking uproar to various boneheaded Obama administration foreign-policy choices, like the Iran deal.

You would think it’d be easy enough to revisit those grievances no matter who the VP nominee is since, er, Biden was Obama’s number two. He’s on the hook for everything that happened between 2008 and 2016. But Trump and his campaign have been unfocused about that, preferring to stupidly rage about Hunter Biden and Ukraine instead. Sleepy Joe has a 35-year record in the Senate and eight years as vice president and you hardly hear anything from POTUS about his worst policy blunders.

Throw Rice in front of him and his team, though, and you’ll hear about them all day long. She was the face of the Benghazi messaging effort, after all. And unlike Joe, she seems to know what she’s talking about, which makes it easier to hold her culpable for Team Obama’s errors.

Why would Biden prefer a lightning rod who’s never held office, like Rice, to a legislator like Elizabeth Warren or Kamala Harris or Val Demings? For starters, familiarity:

According to conversations with a dozen Democrats — a mix of elected officials, formal campaign advisers and outside strategists, most of whom were granted anonymity to share their candid assessments — Biden pines for a partner who could be to him what he was to President Barack Obama: a friend and confidant who subordinated his political interests to those of his boss.

The elusive hunt for Biden’s Biden has recently pushed Susan Rice into the top tier of candidates. As Obama’s national security adviser for his second term, Rice worked closely with Biden on an almost daily basis, making her the only potential running mate whom Biden knows so intimately…

“Put yourself in the mind of Joe Biden,” said one Democratic strategist. “Who is Joe Biden? He spent his entire adult life in the United States Senate. He’s a foreign policy maven. He really takes it seriously. So when he says I need someone on Day One to take over, that specifically means they can deal with China and Russia on Day One. To me, that means it’s not going to be a mayor. And maybe not even a governor. He has a bias towards senators. But it also has to be next generation. So not Warren, who is 71. She performed significantly under expectations. That would lead you to two senators: Kamala Harris and Tammy Duckworth. Who else meets that mold? Susan Rice: ready on Day One for Russia and China.”

Would the left go for that? They just saw their hopes of a Bernie or Warren nomination dashed by the most generic center-left member of the Obama administration. Now, instead of a progressive champion, they’re going to get stuck with another Obama alum as VP?

Also weird: Rice’s specialty is, of course, foreign policy. She started out as ambassador to the UN in Obama’s administration and eventually was promoted to National Security Advisor. The modern left isn’t all that interested in foreign policy apart from efforts to boycott Israel. They’re expecting big things domestically from a Biden administration — not quite Medicare for All or the Green New Deal, perhaps, but steps down the path towards each. The country will also have a hard reckoning post-pandemic on how to get the economy back on its feet, which will require “creative” ways of bringing workers and businesses back online. Containing China is crucially important but America’s biggest challenges in the short term are domestic. What does Susan Rice meaningfully add in coping with those challenges?

Besides, good luck convincing anyone that a pair of Obama retreads are the dynamic duo who are finally going to bring the Chinese dragon to its knees. Eight years of appeasing Iran isn’t a traditional trial heat for a task like that.

And yet, and yet, there have been numerous reports over the past two months indicating that Biden’s interest in a ticket with Rice is real. The Times has a new story out just this afternoon, in fact, suggesting that Rice does want to run for an office of some sort and came closer than anyone realized to challenging Susan Collins for her Senate seat in Maine. It makes me wonder if Biden’s already quietly leaning towards Rice behind the scenes and the media chatter about her suddenly is a sort of trial balloon engineered by the campaign. “Let’s talk her up, get the press talking, and see how the public reacts.” Earlier this month, sources sounded high on her when interviewed by The Hill:

“I know they have a good relationship — perhaps the best relationship of anyone on the list,” the source close to the Biden campaign said. “They’ve known each other for years, they’ve worked alongside each other and she’s been tested in a way that a lot of folks on the list just haven’t been.”…

“Everyone automatically thinks of Kamala when they think he needs to pick a woman of color. It’s become conventional wisdom,” said a source who worked in the Obama administration alongside Biden and Rice. “But if you look at Susan’s credentials, she makes perfect sense. She’s a rock star who has the confidence, stature and gravitas to be vice president.”…

There’s one reason why the left might tolerate her. Bill Scher notes in a piece today that Karen Bass is being pushed by progressives for VP because she’s said in the past that she has no interest in running for president herself. Lefties are concerned that if Biden chooses someone like Harris who clearly does have presidential ambitions and then he decides not to run again for president in 2024, Harris might be very difficult to beat in a primary. A one-term Biden presidency is an opportunity for the left to try again on getting a socialist nominated and they don’t want Biden’s VP presenting too much of an obstacle to that. Rice as VP might be less of an obstacle to them than Harris would because she’d still have never won elected office in her own right by 2024, merely as a running mate to another well-known candidate. And she’d probably still be best known as a foreign-policy specialist, and foreign-policy candidates tend not to win. So maybe lefties would prefer her among the center-left options Biden’s choosing from.

I think he’s probably better off with Demings. She’s low-profile and her long police career would make it a bit harder for Trump to attack Biden as weak on crime. In fact, if this weekend’s riots in major cities persist for another week or two, I wonder if that won’t end up deciding things in Demings’s favor. The left will forgive him for it. Their intense interest in beating Trump this fall will lead them to overlook Demings’s scandalous career in — gasp — law enforcement.