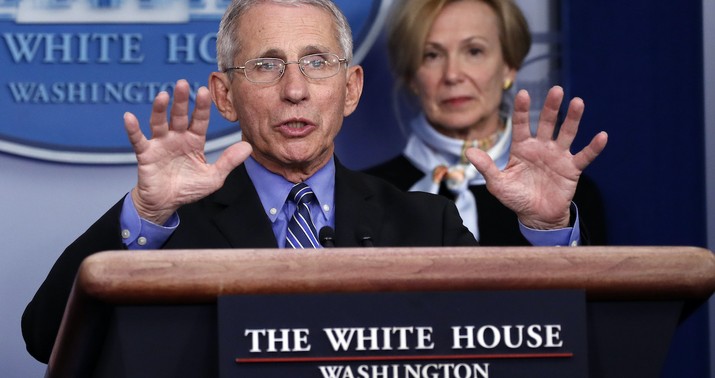 Behold the latest escalation in the White House messaging offensive against its own top scientific expert. Navarro went “rogue” here, I’d bet, in the same way that the National Enquirer would occasionally “go rogue” during the 2016 primaries by dropping well-timed hit pieces on Trump’s chief opponent, Ted Cruz. I don’t know anything about that, the president would say at the time when asked about the latest Enquirer smear, but it sure is interesting.

Yesterday White House Twitter troll Dan Scavino posted a cartoon mocking Fauci on Facebook. Now it’s Navarro sandbagging him in an op-ed in USA Today, an almost unheard-of example of one top White House advisor attacking another in a signed piece for a newspaper. It makes sense that Trump would want to let deputies do his dirty work here since Fauci’s in an unusual position by the standards of Trump administration officials. Most of the public likes him and trusts him and it’s unclear if Trump could fire him if he wanted to. Even if he could, a move like that would wreck Americans’ already crumbling confidence in the feds’ COVID response. I think Trump grasps that well enough that, for the sake of his own political survival, he won’t give Fauci the Jeff Sessions treatment himself.

But would he get Scavino and Navarro to do it? Oh, sure. The only question is whether Navarro had the idea for this op-ed and the president approved it or whether Trump commissioned it himself.

In late January, when I was making the case on behalf of the president to take down the flights from China, Fauci fought against the president’s courageous decision — which might well have saved hundreds of thousands of American lives.

When I warned in late January in a memo of a possibly deadly pandemic, the director of the National Institute of Allergy and Infectious Diseases was telling the news media not to worry.

When I was working feverishly on behalf of the president in February to help engineer the fastest industrial mobilization of the health care sector in our history, Fauci was still telling the public the China virus was low risk.

When we were building new mask capacity in record time, Fauci was flip-flopping on the use of masks.

I wonder how well the White House would receive it if Fauci published an op-ed goofing on Navarro for his embarrassing “Ron Nava” fiasco and critiquing his economic theories. Or, if he wanted to stick closer to the subject at hand, he could remind Navarro that he praised Trump’s travel ban on China many times:

The link goes to a story that says, "Fauci has consistently agreed with the travel decision" and "was an early advocate for such restrictions in internal government coronavirus discussions." https://t.co/XifwtGjWW8 2/3

Fauci couldn’t get away with doing that, though. Because he’s not a Trumpy crony like Navarro is, he’s forced to follow the rules when the White House gags him. Which they did just this past weekend. As for the rest of Navarro’s criticisms, they’re all far more true of his own boss than they are of Fauci, which makes me wonder if part of the game here isn’t to try to pin Trump’s bizarrely sanguine view of the pandemic on Fauci’s influence. Fauci, the guy whom populists have derided as a scaremonger, is now the guy who led our poor president astray with his too-cavalier view of a deadly threat.

Anyway, the official White House line is that Navarro went “rogue” by publishing this without any formal approval:

The Peter Navarro op-ed didn’t go through normal White House clearance processes and is the opinion of Peter alone. @realDonaldTrump values the expertise of the medical professionals advising his Administration.

A senior White House official tells me: “Navarro went rogue, and put out his personal opinion without any approvals. The White House does not stand by these unauthorized opinions and Mr. Navarro owes Dr. Fauci an apology.” https://t.co/mMhFULIiHG

If he didn’t then firing Navarro would be in order. If he did then we’ll probably get some mealy-mouthed Trump disclaimer later today when he’s asked about this by reporters to the effect that (a) he didn’t approve the op-ed so we shouldn’t blame him for it but (b) it’s a pretty terrific op-ed that makes the case against Fauci very strongly and powerfully so you should read it.

This is a good point too. I wonder what Mark Meadows, the latest chief-of-staff-in-name-only, is thinking this morning:

Another thing to consider – Navarro isn't doing this unless Trump tells him it's okay, which means the point at which Trump is working around his chief-of-staff has already arrived. https://t.co/zMce5zDd2q

The conventional wisdom on all this is that Fauci won’t resign no matter how nasty the White House gets. He’ll continue to take their shots and speak his mind — when he’s allowed to speak — because he’s been on the job for more than 30 years as the government’s top expert on infectious diseases and isn’t going to quit his post in the middle of a once-in-a-lifetime pandemic. I wonder, though, if he’s also staying put because he realizes that Trump and his cronies are doing more harm than good to themselves by pursuing this otherwise inexplicable vendetta against him. E.g.,

They’re not going to gain votes by attacking him. They might succeed in damaging Fauci’s credibility (certainly they’ll succeed on the right), but doing that will achieve nothing for them and might actually hurt Trump’s chances this fall. The more the public is encouraged to ignore expert advice, the greater the risk that the virus will continue to spread. And if the virus continues to spread, Trump’s polling will stay put in the toilet. To repeat a point made yesterday, just because it’s so startling that it bears repeating, there appears to be no strategy behind the effort to bash Fauci. It’s not geared at winning votes or at somehow slowing down the pandemic. It’s pure scapegoating for the sake of scapegoating, carried out by the president’s deputies either at his behest or in the assurance that he’ll be pleased by the effort. This is what they’re doing with their time three and a half months out from an election in which Trump’s down eight points nationally.

One more thing. Navarro’s last criticism of Fauci in the op-ed is that he’s been a skeptic of hydroxychloroquine all along, which sure looks foolish in hindsight given the results from the Henry Ford Health System a few weeks ago finding a much higher survival rate among patients who received HCQ. That study was the most encouraging news about the drug so far — but it was an observational study, not a randomized clinical trial. There are many other observational studies showing no benefit from HCQ. I don’t know what this guy’s doing taking a victory lap when the real “race” on hydroxychloroquine hasn’t been run yet. Maybe Dr. Ron Nava should leave it to the pros.