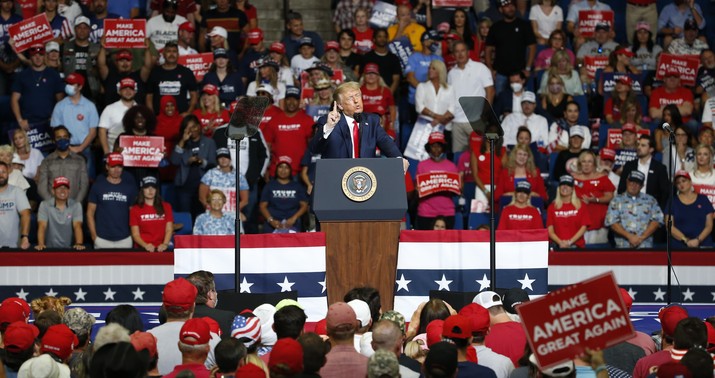 Is it too late to move it to a swing state governed by a Republican up north, where being outdoors at 8 p.m. in late August won’t be as oppressive?

Scratch that. Apart from New Hampshire, which is small potatoes in terms of electoral votes, there are no Republican-governed swing states up north, right?

This is the right move, politically and epidemiologically, although you get the same foreboding sense of futility from it as you do from pro sports leagues grasping for ways to restart their seasons safely. They’re doing their damnedest not to let the virus ruin everyone’s fun, but the higher the case counts climb, the more likely cancellation is.

With coronavirus cases surging in Florida, Republicans are planning to move the three nights of their national convention from an indoor arena to an outdoor venue in Jacksonville, but it’s still unclear how many people will be allowed to attend the events, people familiar with the discussions said Tuesday.

Officials met Monday night to discuss shifting the events of Aug. 25, 26, and 27 out of the VyStar Veterans Memorial Arena, where the indoor program was scheduled to take place, including President Trump’s acceptance speech on the final night. The two outdoor options they’ve been examining are near the arena, the people familiar with the discussions said…

Officials remain uncertain about whether a capacity crowd would be allowed to attend outdoor events, or if there would be restrictions to prevent people from being too close to one another.

Charlotte, the original site of the convention, isn’t considerably cooler in the evenings than Jacksonville so moving the convention outdoors would have involved a swelter either way. But North Carolina’s epidemic right now is less severe than Florida’s, which set the U.S. record for the highest number of new confirmed cases in a single day (higher even than New York at its peak) over the weekend. NC’s positivity rate is also less than half of Florida’s and has been essentially stable for the past month as FL’s has more than quadrupled. Cruelest of all for Trump and Republicans, they moved the convention initially because North Carolina’s Democratic governor wouldn’t guarantee that they’d be allowed to have a large indoor gathering with no social-distancing restrictions. But Jacksonville’s now in the same position: A mask mandate has been imposed city-wide, notes the Times, and it’s anyone’s guess what sort of capacity limits will be set for the event to minimize the risk of infection.

White House aides were reportedly leaning on Trump over the weekend to move it outdoors but he was reluctant because, per the AP, he feared “it would lack the same atmosphere as a charged arena.” That’s not necessarily true — Obama’s 2008 convention speech was held outdoors (remember the Greek columns?) — but if the crowd is masked up and the space is only 50 percent full due to city restrictions then a “low-energy” outcome is distinctly possible. It’s already unavoidable to some extent, in fact, since the roll call of states to renominate the president will be done virtually rather than in-house. And even if the virus has calmed down a bit in Florida by late August, the major outbreak the state is now experiencing is an easy hook for critical media coverage. “Officials who weeks ago had looked for the convention to be a celebration of the nation’s vanquishing of the virus now see it as a potent symbol of the pandemic’s persistence,” as the AP puts it. A convention in North Carolina wouldn’t have been as susceptible to that narrative as one in the state with the new record for confirmed infections in a single day.

There’s one way in which this arrangement has worked out for Republicans, though. Any incumbent who’s on the ballot this fall and who needs to not be seen with Trump for electoral reasons has a ready-made excuse to skip the convention, blaming health reasons. And many are availing themselves.

“Everybody just assumes no one is going,” said Representative Darin LaHood of Illinois, an honorary state co-chairman for the Trump campaign…

Still, even as growing numbers of elected leaders express wariness about attending, a strong contingent of Republican National Committee members — many of whom have their political fortunes tied to Mr. Trump — say they still plan to go. In interviews, more than a dozen of them said they were committed, even “proud,” to celebrate the renomination of Mr. Trump…

“Everyone in the media wants to act like it’s some big deal that Susan Collins and Lamar Alexander aren’t going to the convention,” said Representative Matt Gaetz of Florida. “The reality is the number of delegates craving the octogenarians and septuagenarians of the Senate are surely lower than the number who have purchased their third Star Wars costume.”

The good news for POTUS is that, although the crowds will be smaller, the people who turn out for this thing will be a smattering of the most ardent Trumpers (and pretend-Trumpers) in America, people who’ll yell their hearts out for him. All of the 2024 hopefuls will be there. The Trump family will be there. Anyone who’s in populist media and under the age of 65 is apt to be there as well. What the event lacks in volume it’ll make up for in enthusiasm.

Although I suppose there’s a worst-case scenario in which cases continue to climb or even hold steady in Florida at an elevated level for the next month and suddenly all sorts of people who were on the fence about going decide to opt out. There must be some threshold of empty seats that the campaign has in mind at which point they’d start canceling things altogether so as not to suffer a round of bad press due to poor turnout. Look no further than the rally Trump was supposed to hold in New Hampshire this past Saturday night, which ended up being canceled supposedly because of the “big storm” that was on the way. It’s true that Tropical Storm Fay was descending on the northeast on Friday afternoon but the forecast for Portsmouth, site of the rally, was fine even at the time. “[P]eople close to the campaign said fears over low turnout also motivated the decision to scrap the event,” NBC reported on Friday evening. Low turnout like they had in Tulsa was a risk even before the storm; with the weather less than ideal, Trumpers may have stayed away in droves. Even Chris Sununu, the state’s Republican governor, decided to opt out.

“We can’t have a repeat of Tulsa,” a campaign official told NBC earlier that morning, before the rally had been canceled. That’s 100 times truer for the convention than it was for the New Hampshire event. What do they do if it looks like they have a “repeat of Tulsa” shaping up in Jacksonville? Switching to a virtual convention would be the easiest way to kill off any coverage about crowds and “ebbing enthusiasm.”

I’ll leave you with this thought, contrasting the defiance of the risk posed by COVID-19 by the populist activist class with the behavior of Trumpers expected to attend his rallies.

Between the surprisingly small crowd in Tulsa and the pretextual cancelation of the NH rally (nominally about the weather, more likely because of small expected crowds), there is a big gap between floomerist, things are fine, MAGA twitter and the MAGA electorate.