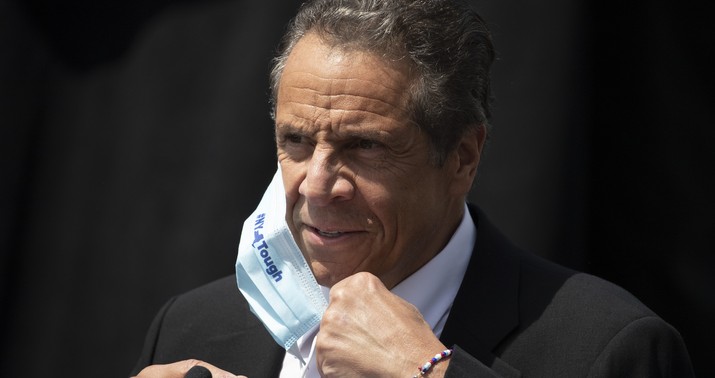 There were so, so many reasons already this year to doubt Americans’ basic good judgment and common sense.

Now we have one more to add to the list.

My best stab at explaining why this guy’s popularity is cresting after he just finished overseeing the most horrific COVID-19 outbreak on Earth is that most of the pre-pandemic anti-Cuomo vote in New York State must have been concentrated in nursing homes.

“New Yorkers are responding in a very positive way to Governor Cuomo’s leadership during this unprecedented time,” says Dr. Lee M. Miringoff, Director of The Marist College Institute for Public Opinion. “Cuomo has been able to govern in a convincing way both on COVID-19 and the economy.”

When asked, overall, whether they approve or disapprove of how Cuomo is executing his job duties, two in three (66%) New York State residents, including the same proportion of registered voters statewide, say they approve. 29% disapprove.

Would he be polling better or worse right now if 40,000 New Yorkers had died this spring instead of 30,000? Like, is there some perverse correlation between the governor’s job approval and the scale of the body count on his watch?

All right, I’ll give you three credible theories for Cuomo’s rising job approval. One, of course, is the soft touch he’s gotten from some of our friends in the media since he is, after all, on The Team. Not from everyone in the media, it should be stressed: Pro Publica and the Wall Street Journal have hit him hard on New York’s COVID debacle, particularly his infamous nursing-home policy and his long, ruinous delay in shutting down the state as infections spread early. But that’s print media. TV news has treated Cuomo more kindly, nowhere more so than the recurring Cuomo Boyz Family Hijinx segments on CNN. If you’re getting pattycake treatment like that regularly from a “news” network, the audience is destined to like you.

Another theory, dearer to my heart, is that American voters are fundamentally stupid and have the attention spans of goldfish. How many New Yorkers are looking at the latest daily graphs of the state’s and city’s case counts vanishing to near-zero and thinking, “Damn, we totally crushed the curve.” It’s true, they did crush it, essentially by having everyone who contracted the disease die from it. (Fine, that’s an exaggeration. Still, they have an eight percent case fatality rate.) It may be that New York’s survivors are simply glad to be alive, optimistic that the state won’t have to endure another ordeal, and willing to cut Cuomo a ton of slack for having handled a once-in-a-lifetime pandemic for which no one was prepared … sub-optimally.

The last theory is that messaging matters. Cuomo was good on camera at his daily briefings throughout New York’s crisis. He may be a screw-up but he convinced the public that he isn’t through effective communication, which is one part command of the facts and one part empathy. Compare and contrast him on that point with the other prominent officeholder from New York who’s currently leading a major pandemic response. Trump typically doesn’t bother in interviews to even feign empathy and his “command of the facts” at this point boils down to insisting repeatedly, and incorrectly, that we’re only seeing more cases because we’re doing more testing. That’s not to suggest that Trump would have a 60 percent approval rating right now if his public rhetoric about the virus were more Cuomo-esque, but it wouldn’t be anywhere near as gruesome as the 33/67 rating ABC dropped on him this morning. Trumpy messaging is fine and amusing when the economy’s roaring and things are humming along. “America’s on cruise control!” In the middle of a pandemic, the feeling from it is more “Oh sh*t, no one’s driving the car.”

Anyway, in a better country Cuomo’s political career would be over. We’re not that country. I’ll leave you with two more fun facts from this poll. First, even in a state where voters are capable of watching a mass culling of the elderly and still handing a 66 percent approval rating to the governor, Bill de Blasio is underwater. He’s at 42/44 statewide (and 50/44 in NYC). Cuomo sits on a throne of skulls and de Blasio’s still not within 20 points of him on approval. I wonder if New Yorkers have simply concluded that the enormous death toll in NYC is necessarily de Blasio’s, not Cuomo’s, fault. He’s the mayor, right? It’s on him. Second, although it’s widely assumed that America’s parents want their kids in class this fall so that they can get back to work and just … have a moment for themselves after six months, it’s not true. New Yorkers oppose fully reopening public schools, 40/50. Among parents with school-aged children, it’s evenly split (45/46). If POTUS thinks “open the schools!” is the thing that’s going to swing suburbanites back into his column, he’s mistaken. Especially if he keeps doing everything in his power to signal that he’s not concerned about safety.