The poll that explains everything 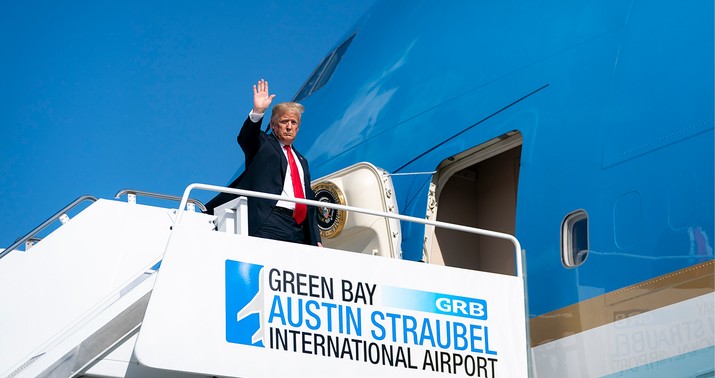 I bet these numbers are getting attention today at the White House, for good reason.

Purely and simply, either the trend in the graph below reverses before November and the president has a fighting chance at a second term or it doesn’t and he doesn’t. He can’t get reelected if he’s rating this badly on the country’s biggest concern.

Every other poll we’ve looked at over the past few weeks is noise by comparison.

BREAKING: Approval of Pres. Trump's oversight of the COVID-19 crisis reaches new low in @ABC News/Ipsos polling, with 67% of Americans disapproving of his efforts. https://t.co/kNltxMCnbv pic.twitter.com/KQcgsTGZw9

Sixty-seven percent disapproval of how he’s handling COVID isn’t just garish, it’s meaningful in that it shows Trump losing parts of his own base on the issue. He’s not “supposed” to poll below 40 percent in approval metrics, as that’s the share of the electorate that’s stuck with him through thick and thin over the course of his presidency. If he’s at 33 percent, it means there’s been a crack in the granite foundation of his base. ABC has numbers on that as well:

Trump’s approval [on handling the coronavirus] among independents lands at 26% in the survey, a sharp drop from 40% in mid-June, the last time the question was asked. Trump’s disapproval among independents has risen to 73%, up from 59% in the June poll.

Within his own party, Republicans are less inclined to back him in the newest poll, with only 78% approving of the president’s handling of the coronavirus, compared to 90% in mid-June. His disapproval of 22% in the new poll is a more than two-fold increase from last month.

Even his base of whites without a college degree has slipped from 57/42 on his handling of the epidemic last month to 50/49 now. Here’s another data point that likely explains part of the decline, although probably not all of it:

NEW: A majority of Americans believe the push to reopen the economy is moving too quickly, new @ABC News/Ipsos poll finds. https://t.co/70p4kBIa0j pic.twitter.com/9qBYrD2RMF

As case counts flare nationally, especially in southern states, the press and some portion of the public have concluded that it’s due to states reopening too early. Which isn’t entirely fair: It’s logical that more commerce would produce more cases, especially with twentysomething morons celebrating reopening by cramming into indoor spaces like bars to celebrate the end of quarantine. But there’s no hard proof that early reopening has driven this. California didn’t reopen early, yet it has one of the worst outbreaks in the country at the moment. The Black Lives Matter protests may have driven the surge there and in other hot spots, or at least compounded a problem that was created by reopening.

But as the graph shows, the public’s sense that reopening came too soon is growing. And because Trump was the biggest cheerleader for reopening early, he’s destined to be blamed for that misjudgment.

Still, that doesn’t explain everything, as disapproval of his handling of the virus has grown more than the share of people who think the country reopened too early has. Some of the deterioration must be due to his own performance. I think it’s probably no more complicated than the fact that his major contribution over the past month to the effort to cope with rising cases and hospitalizations has been to insist repeatedly that this is all some sort of mirage created by increased testing. If he had a plan for containment and was scrambling to implement it and case counts were rising anyway, I think voters would reward him for the effort and reserve judgment to see if the plan worked.

Instead, despite the public’s growing belief that businesses reopened too quickly, he’s already moved on to demanding that schools reopen quickly as well.

Here’s the fateful question for November. Is there still time to undo voters’ loss of confidence in him by changing course or is this all baked in now? Or is it silly to imagine him changing course in the first place?

I mean, if Trump tomorrow suddenly woke up with [Obama/Romney/insert politician here]'s temperament, said "we screwed up and I'll make this right", actually followed through and did it—then maybe the public *might* give him *some* credit. But, sorry, that ain't going to happen.

^^ Nor is it clear that the new cohort of cases is really priced into Trump's polling numbers yet. There actually haven't been that many polls over the past couple of weeks and these things can take a while to sink in.

I don’t know. Voters’ memories are short. Trump’s entire strategy for reelection is to keep the economy improving steadily through October even if it’s nowhere near all the way back to where it was in February by Election Day. It’s trends that voters look to, not absolute performance. If COVID burns out in the south and California by September and remains burned out in the northeast after the mass bloodletting there this past spring, Trump could point to those trends and say, “We’ve beaten it. The worst is behind us and the vaccine is coming soon.” That might give him a shot at an upset.

But for that to happen, scientists would need to be wildly mistaken about the likelihood of a second wave this fall. They seem confident that we’ll see one. If we do, it may take nothing short of a miracle drug to hit the market between now and then to save Trump.

Here’s another fateful question. Is public opinion about his handling of the virus bleeding over into unrelated issues? This bit from Amy Walter’s new piece on swing voters’ dislike of “cancel culture” is worth quoting:

Even so, warns one GOP strategist I spoke with this week, there is real concern among suburban voters about where this so-called ‘cancel culture’ or what we called in the old-days, PCism, is headed…

But, this person points out, they are also wary of how far this reckoning will go. Over the last week or so, they’ve raised the question of “where does it end?” They cringe at reports of statues of Christopher Columbus being tossed into a lake and are upset to read of another public figure fired for a controversial Facebook post that they put up years ago.

However, the challenge for Trump in being able to exploit these concerns is that these voters “are mostly done with him” and think that “he makes everything worse.” As a messenger, this person said, Trump has “zero credibility” with these suburbanites.

I bring that up because ABC found in this same poll that voters are now more likely to disapprove of the Confederate flag than they were five years ago. In 2015 they split 13/28 when asked if they have a positive view of it or not. Today it’s 5/43. Maybe that has nothing to do with Trump, that it’s just a natural evolution of the country’s views as younger people age in and older people age out of the electorate. But then I thought of this Gallup poll a few weeks ago showing that, for the first time ever, more Americans want immigration to the U.S. to increase rather than decrease. That feels like a backlash to Trump himself given his strong support for decreasing immigration. There may be a similar “Trump effect” coloring other issues as he embraces them, in which his unpopularity due to his handling of COVID or just his general Trumpiness is now drving perceptions of issues with which he’s identified. If that’s true then his crusade in defense of monuments to the Founding Fathers may not do much to rally public opinion in the suburbs, or may even discourage some people in the center from championing the cause themselves because they don’t want to be seen as partnering with him. In that case, the urgency with which he needs to turn things around on the pandemic is even greater than we thought.