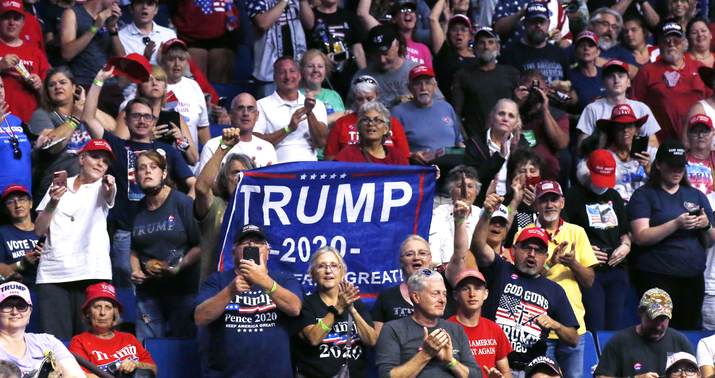 Much depends on the word “contributed,” though. No doubt the George Floyd protests “contributed” to the spread of coronavirus in some cities. Given all the people who turned out for them, it’d be a mathematical near-impossibility for them not to have produced any transmissions.

The question is, did they drive the outbreaks anywhere or were they incidental? Any transmission is bad given the chain it can set in motion, but for now the evidence that the protests were major contributors to community spread is thin due to the absence of new spikes in places like Minneapolis and NYC.

This story doesn’t answer that question about the Trump rally and maybe there’s no way to do so. The director of Tulsa’s health department is looking at case counts locally and statewide and surmising that yes, an indoor gathering of thousands of people, most of whom weren’t wearing masks, probably “contributed” to those rising counts. But did it drive the spike? Was it a major contributor? I don’t know if he can possibly hope to form a solid opinion about that.

Even so, this guy may have just quashed Trump’s dream of a large live crowd in Jacksonville for this nomination speech next month. The public was already leery of mass gatherings indoors. If there’s now a public health official kinda sorta confirming that people got sick because Trump insisted on going through with the Tulsa rally, the politics of him doing it again in Florida will be so dicey that he’s probably better off switching to a virtual convention. Maybe have a small crowd onhand of one or two thousand people spaced out across the arena and instructed to cheer their guts out to try to produce a sufficient amount of crowd noise.

Although the health department’s policy is to not publicly identify individual settings where people may have contracted the virus, Dart said those large gatherings “more than likely” contributed to the spike.

“In the past few days, we’ve seen almost 500 new cases, and we had several large events just over two weeks ago, so I guess we just connect the dots,” Dart said.

Note: “Several large events.” He’s not suggesting that Trump’s rally alone drove the uptick in cases lately. Whether Floridians will find that reassuring as they get ready to host the convention is another question.

What sort of numbers was he drawing on to inspire this conclusion? Here’s the data for Tulsa:

It’s hard to look at that and conclude that any single event is responsible for the high case counts of the past two days. After all, the total for July 7-8 is nearly identical to the total that the county experienced in the two-day span of June 23-24. And Trump’s rally couldn’t have caused that earlier spike: It was held on June 20 and COVID normally needs five to seven days to incubate. Not only that, the high number of cases in Tulsa over the past 48 hours may be a function of the holiday weekend. Testing centers may have been slower than usual to process tests on Friday, Saturday, and Sunday, producing a higher backlogged number of positives on Tuesday and Wednesday. It may be that Tulsa isn’t even seeing a true spike at the moment.

Besides, there’s no reason to assume that most of the people who attended the rally were from Tulsa. A presidential event is a true event, drawing people regionally. A better metric might be the trend in Oklahoma’s cases statewide. Which, ah, isn’t great:

The 7-day average has reached a new high of 540 daily cases. pic.twitter.com/KYPewWsYyb

Again, we have a two-day spike following the holiday weekend, with OK setting a record yesterday with 858 cases followed by its second highest number ever today at 673. Is that because there’s a real spike or is it another artifact of slower testing on and around July 4? Note too that there was a steady upward trend in Oklahoma cases even before Trump blew into town. Cases began rising around June 13, climbed steadily upward through the rally on June 20 and onward for another week, then briefly plateaued before another spike last week. Was that second spike a byproduct of Trump’s event — or just the continuation of a weeks-long trend, the same sort that’s plagued Texas and Florida and Arizona lately?

The assumption that the rally “contributed” in some way to Oklahoma’s problem is reasonable. The idea that it was a major contributor is much more questionable. But like I say, as a political matter it’s probably irrelevant. The RNC doesn’t want to be stuck having to argue, “We’re confident there were only a few transmissions of this deadly plague at the president’s rally.” They’re going to end up having to do something about the convention. I’ll leave you with this: