Eagles’ DeSean Jackson: When I cited Hitler approvingly as saying Jews are extorting America, I didn’t mean it anti-semitically 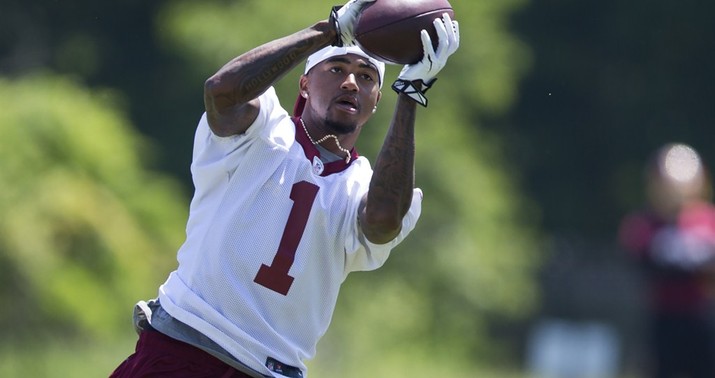 Happens to the best of us, buddy. Social media is notorious for people interpreting others’ posts uncharitably, sometimes even deliberately distorting their meaning in order to score a point.

Fans should have realized that when you flagged a quote about Jewish blackmailers that purported to come from the head of the genocidal Nazi regime, you meant it in the best possible way.

Celebrities getting themselves into trouble with deep thoughts on Twitter and Instagram is nothing new in America 2020, but you don’t often get a Hitler cameo:

DeSean Jackson, posts a quote from Hitler, says he’s not anti-Semitic and then highlights the particularly anti-Semitic part.

As an Eagles fan, this is disgusting. Where is the response from the team and the NFL? pic.twitter.com/MFPmz0PyOY

DJ may be the first person canceled this year for lacking the basic good sense not to caption a quote attributed to the Fuhrer with “THIS^^^^”. The Eagles are not amused:

I post a lot of things that are sent to me. I do not have hatred towards anyone. I really didn’t realize what this passage was saying. Hitler has caused terrible pain to Jewish people like the pain African-Americans have suffered. We should be together fighting anti-Semitism and racism. This was a mistake to post this and I truly apologize for posting it and sorry for any hurt I have caused.

Drew Brees apologized twice and his wife apologized once for Brees’s very modest criticism of kneeling during the national anthem, notes David Harsanyi. How many times is Jackson going to have to apologize for tossing a little pro-Hitler invective at America’s Jews?

Philly is weighing its options:

Eagles decision on whether to keep DeSean Jackson could come down to whether post is a default under his contract. Jackson is guaranteed $4.8M this year in salary and already received a $2M option bonus. Eagles could try to figure out a way out of guaranteed salary first.

How did Jackson end up posting a (fake) quote attributed to Hitler in the first place? Well, it seems he has Farrakhan on the brain lately. The passage from the book he highlighted in his now infamous tweet wasn’t written by Farrakhan but it’s Farrakhan-esque, as the minister himself has embraced the theory that the Jews of Israel aren’t the true chosen people and rightful rulers of the promised land. Guess who is. According to the Daily Caller:

Jackson on Saturday posted a clip from Farrakhan’s Independence Day speech, where the Nation of Islam leader railed against a potential coronavirus vaccine as a conspiracy to depopulate the earth. Jackson added the caption: “#farrakhan This man powerful I hope everyone got a chance to watch this !! Don’t be blinded. Know what’s going on !!”

The 4th was a big day for woke athletes this year. Lebron James pointed readers to Frederick Douglass’s speech, “What To The Slave Is The Fourth Of July.” Colin Kaepernick one-upped that by pointing to the same speech but adding that he rejects a day founded on white supremacy. Jackson trumped them both by going full Farrakhan, up to and including showing off excerpts from his reading accusing Jews of being usurpers and extortionists that supposedly originated with Adolf Hitler.

I’m not sure how that’ll be topped, but it’s only Tuesday. Lot of time still left in this week’s Woke Olympics.

The only thing that can be said in this idiot’s defense (and it’s no defense) is that to this day Farrakhanism remains somewhat mainstream in America, enough so for the minister himself to have shared a stage with Bill Clinton a few years ago at Aretha Franklin’s funeral. Last week news broke that Fox Soul, a streaming platform aimed at black audiences from the Murdoch family’s media conglomerate, was planning to air a program featuring Farrakhan on July 4, of all days. The program was canceled after an outcry about it but not every celebrity was glad to see it go:

Three of the four organizers of the Women’s March had ties to Farrakhan, and of course by now — very belatedly — we’ve all seen the photo of a smiling Barack Obama posing with him on the 2008 campaign trail. Farrakhan’s not quite mainstream enough for O to have been comfortable advertising that photo but also not fringy enough that O would decline to pose for it in the first place. He has a meaningfully large constituency among black Americans and Obama knew it. Go figure that DeSean Jackson, who’s part of that constituency and no doubt friendly with other adherents, would post a perfectly familiar Farrakhanist idea and then be surprised to find that it’s unacceptable. If he gets cut, it’ll be one more step in a looooong journey of trying to convince Farrakhanists that no, following him isn’t okay. If they won’t cancel him, they’ll be canceled themselves. Sometimes.