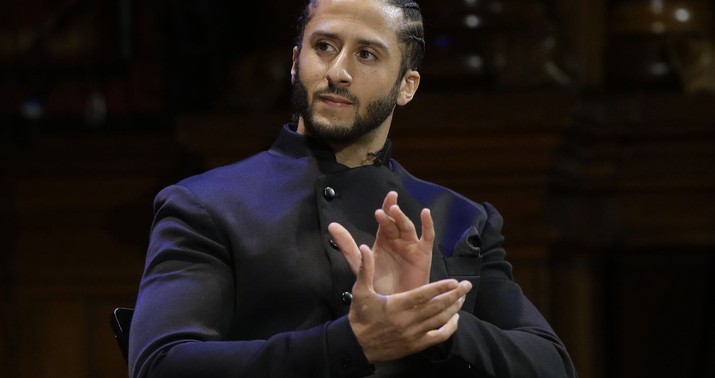 Having been canceled for several years by the NFL and then rapidly and surprisingly un-canceled amid the national protests over George Floyd’s killing, this dude can now effectively be as radical as he wants without fear of being canceled again. It’s almost a punchline that a media company which famously markets itself to kids and has been known for decades as a byword for wholesome entertainment would lock him down to a production deal within 48 hours of him rhetorically wiping his ass with the American flag on July 4.

This tweet also serves as a reminder that Kaepernick the activist has been reimagined to some degree over the past few years. His most famous political demonstration, kneeling during the national anthem, was aimed at the specific issue of police brutality but that issue doesn’t represent the universe of his activism. This is a guy who’s not above defending Castro, remember. I’m excited to see what new political bon mots he’ll gift Disney with once he’s back in the league and speaking regularly to reporters again.

Black ppl have been dehumanized, brutalized, criminalized + terrorized by America for centuries, & are expected to join your commemoration of “independence”, while you enslaved our ancestors. We reject your celebration of white supremacy & look forward to liberation for all. ✊🏾 pic.twitter.com/YCD2SYlgv4

That’s Kaep’s version of Frederick Douglass’s speech, “What To The Slave Is The Fourth Of July,” but the tone is different. Douglass’s address was a demand for America to live up to its founding ideals. Kaepernick’s tone is more rejectionist, a sense that the entire American project is hopelessly poisoned and that a new model will be needed to achieve true “liberation.” He’s not obliged to recognize progress, even at a moment of progress as remarkable as the one we’re having, but it’s telling that his main emotion as the public is suddenly moving towards him politically is “F*** you and your racist country.”

He’s true to the spirit of wokery, though. Gotta give him that.

Under terms of the pact, announced Monday, Disney and Ra Vision will emphasize scripted and unscripted stories that deal with race, social injustice and the quest for equity, and work to showcase directors and producers of color. Disney said the agreement would extend across its units, including Walt Disney Television, ESPN, Hulu, Pixar and The Undefeated, an ESPN venue that focuses on matters of race in sports. Kaepernick is slated to work closely with The Undefeated, which Disney said would expand its portfolio across the company.

“I am excited to announce this historic partnership with Disney across all of its platforms to elevate Black and Brown directors, creators, storytellers, and producers, and to inspire the youth with compelling and authentic perspectives,” Kaepernick said in a prepared statement. “I look forward to sharing the docuseries on my life story, in addition to many other culturally impactful projects we are developing.”

There’ll also be a documentary series produced chronicling Kaep’s journey from Blaine Gabbert back-up to the new Malcolm X. Say, didn’t ESPN resolve a few years ago to have less politics on its network? “I will tell you I have been very, very clear with employees here that it is not our jobs to cover politics, purely,” said new network president Jimmy Pitaro at the time. Two years later, here’s Pitaro again:

“Developing exceptional storytelling told through a wide array of voices is at the core of who we are at ESPN. Colin has had a singular path as both an athlete and an activist, and, as the nation continues to confront racism and social injustice, it feels particularly relevant to hear Colin’s voice on his evolution and motivations.”

According to Variety, Kaepernick’s hired Jemele Hill to produce the docuseries about him. Didn’t ESPN part ways with Hill because she was … too political?

Then again, look at it from the network’s perspective. What else are they supposed to air right now? The pandemic has left them with little more than classic reruns, pro athletes facing off online in video games, and cornhole highlights. Watching a hagiography of Kaep produced by Hill is better than, uh … well, maybe not better than the reruns or cornhole, but possibly better than the video games.

Although it depends on who’s playing, really. I’d watch Lebron versus Giannis in “Fortnite.”

Exit question: Does Kaepernick really want to play in the NFL again? It’s going to be weird watching him moonlight on Sunday from his new job as America’s foremost civil-rights icon to be a mediocre pro quarterback.