“No more of Jared’s woke s***”: Trump steering away from following Kushner’s advice? 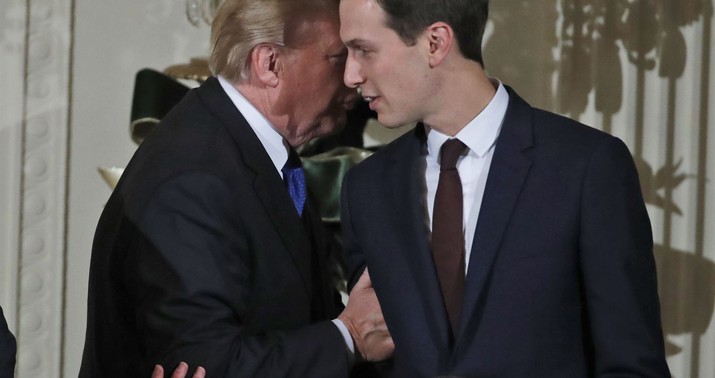 I’m a broken record on this point but I can’t get over the fact that the president’s slipped to a 10-point deficit in national polling and his diagnosis of what ails him is that he’s not Trumpy enough.

There’s too much “woke sh*t” in his campaign, you see. He’s too soft. Never mind that his chief contribution to the reckoning much of the public’s experienced over the past month on racism and police brutality was to send cops into Lafayette Park to strongarm protesters and to threaten to send the U.S. military into America’s streets to shoot looters.

There’s no “Trump problem” that can’t be solved with more Trump.

No one should (or will) shed tears for Jared, though. If anything, Trump’s giving him his just desserts. Clearly we’ve reached the fingerpointing and scapegoating stage of the campaign’s difficulties, a process in which Jared’s been a willing participant. News broke last night that he’s reassigned Michael Glassner, who’s in charge of organizing Trump’s campaign events, after the humiliation a few weeks ago in Tulsa — even though there’s no reason to believe Glassner’s at fault.

Jared Kushner engineered these moves. Glassner, a Trump campaign original dating back to 2015, has been told he will now be handling the campaign’s various lawsuits, sources say…

One person familiar with the shake-up defended Glassner as the unfortunate guy whose head needed to roll for the Tulsa rally debacle, where the attendance was nowhere near what the president had anticipated.

If Trump’s government had done a better job controlling the spread of the virus, Trump’s fans would have felt more comfortable filling the upper deck inside the arena in Tulsa. But Kushner can’t say that so he’s stuck shifting blame. Not just to Glassner either: He was reportedly also “pissed” at campaign manager Brad Parscale for overhyping RSVPs to the Tulsa event before poor turnout embarrassed the campaign, but Parscale is a Kushner ally and seems likely to avoid being fired if Glassner’s taking the fall. The leak about Kushner’s supposed anger at Parscale smells like something engineered by him and Ivanka to signal to Trump that the fault for Tulsa lies with others, not with them. Even though, as the world understands, it’s Jared Kushner who’s really in charge of the Trump operation, not Parscale.

But maybe not for much longer? New from Axios:

President Trump has told people in recent days that he regrets following some of son-in-law and senior adviser Jared Kushner’s political advice — including supporting criminal justice reform — and will stick closer to his own instincts, three people with direct knowledge of the president’s thinking tell Axios.

Behind the scenes: One person who spoke with the president interpreted his thinking this way: “No more of Jared’s woke s***.” Another said Trump has indicated that following Kushner’s advice has harmed him politically…

The sources said the president has resolved to stick to his instincts and jettison any policies that go against them, including ambitious police reform…

Trump has made clear he wants to support law enforcement unequivocally, and won’t do anything that could be seen as undercutting police.

This might also explain his moronic decision to veto funding for the Pentagon in defense of Confederate base names at a moment when he’s already taking heat for not supporting U.S. troops aggressively enough in the Russian bounties matter. From here on out he’s going to get crazy with the MAGA cheez whiz. Like, say, by calling “Black Lives Matter” — a movement which more than half the country now says it supports in polling — a symbol of hate:

….horrible BLM chant, “Pigs In A Blanket, Fry ‘Em Like Bacon”. Maybe our GREAT Police, who have been neutralized and scorned by a mayor who hates & disrespects them, won’t let this symbol of hate be affixed to New York’s greatest street. Spend this money fighting crime instead!

“Trump now says privately it was misguided to pursue” criminal justice reform, claims Axios, “undercutting his instincts, and that he probably won’t win any more African-American support because of it.” He only did it because Jared asked him to, allegedly. Kushner has given Trump some terrible advice, most infamously recommending that he fire James Comey in the thick of the Russiagate probe, which ended up turbo-charging it. But his advice on criminal justice reform isn’t among that. The First Step Act championed by Trump in 2018 was one of the few broadly popular initiatives he’s undertaken as president, with nearly 60 percent in favor. If anything, Americans think it didn’t go far enough: A poll taken 10 days ago in the wake of the George Floyd protests found 69 percent of American adults believe the criminal justice needs either a complete overhaul or major changes. Among whites, 65 percent said so. Forty-six percent of Republicans agreed versus 47 percent who didn’t.

What Trump seems to miss, if you believe Axios’s reporting, is that measures like criminal justice reform aren’t really designed to win over black voters. Ideally they’ll win a few votes from that group, maybe enough to make Biden sweat a bit, but Democrats will run up the usual 85-point margin or thereabouts. The point of centrist programs like CJR is to convince white suburban college grads that the president is more moderate and willing to find common ground than they think. The reason they’ve drifted into the Democratic camp is that they don’t like his essential Trumpiness. And there are enough of them out there to swing the election: They made the difference for Dems in the 2018 House races and they’re poised to do so again this year. Trump now seems inclined to kiss off that group entirely, apparently in the belief that if he indulges his “instincts” he can run up the score high enough among working-class whites to offset every other demographic advantage Biden has working for him.

What happens from here is unpredictable, as I don’t think I’ve ever seen a presidential campaign that doesn’t even try to win over swing voters. I wonder if Mitch McConnell’s ever seen one. His emphatic break from Trump on the important niche issue of masks may supply an answer. If Trump’s going all-in on Trumpiness the rest of the way as his “brand” then McConnell and Senate Republicans need to do what they can to fashion a brand of their own that’s somewhat distinct. It makes me wonder how they’re going to handle the defense bill with Warren’s amendment about renaming Confederate-named bases now that Trump’s threatened to veto it. If they want to signal a break with Trumpiness, the obvious move would be to pass it with veto-proof margins.

By the way, although the “blame Kushner” mentality is new-ish to Trump, it’s of course not new to his fans. Tucker Carlson unloaded on Kushner on his program a month ago, telling Fox viewers, “No one has more contempt for Donald Trump’s voters than Jared Kushner does.” (Axios notes in its post today that Trump pays close attention to Carlson’s show.) Coincidentally, there’s a bruising hit piece on Kushner this morning at Spectator USA replete with quotes from conservative activists and officials like “Jared is a total f***-up. Everything he touches turns to lead.” And “People who have sat in meetings with him, however, describe him as ‘slow’, ‘a moron’ and ‘not really that bright'”. Kushner’s made many enemies over the last four years; maybe watching the campaign falter has loosened some of their lips.

But it could also be that certain nationalists, possibly including those who’d like to regain some influence in the White House, are whispering to Trump and the media strategically in hopes of ousting Kushner at a moment when Trump is looking for a scapegoat for his polling. With Jared out of the way, there’d be an enormous power vacuum around the president just waiting to be filled. Stay tuned.

Amid Cancel Culture, Now Academics Have Their Next Target: Pickup Trucks

“I’m not going to argue with you. Jesus is King.”

“Biden” retreats: What I meant to say was that African-Americans are incredibly diverse, too

‘Now, when I mean full diversity, unlike African-American community and many other communities, they’re from everywhere…”