Dixie Chicks self-cancel: We’ll be known as “The Chicks” from now on, thanks 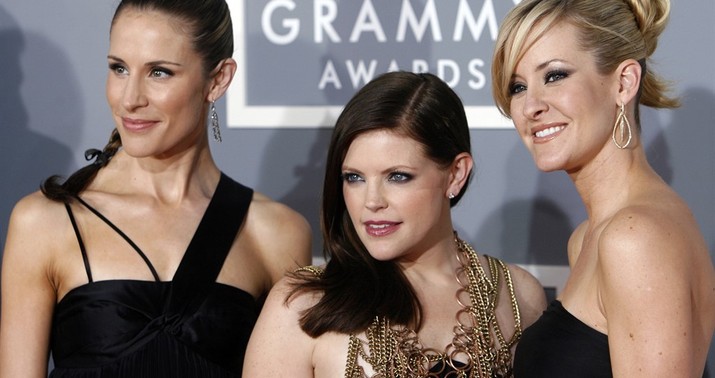 “Dixie Chicks lived long enough to get cancelled by both sides,” tweeted Zaid Jilani in response to this news, adding, “(may even be a third when ‘chicks’ is considered problematic)”.

Yeah, why’d they keep the “chicks” part? Why not seize the opportunity presented by this extremely woke moment to rebrand completely with something less … cis?

I won’t charge them for it. The joy of knowing there’s a group out there performing as “Lady Antifa” is all the compensation I need.

The Dixie Chicks have officially dropped the “Dixie” from their name. The iconic country-pop trio of Natalie Maines, Emily Strayer, and Martie Maguire are now simply called “The Chicks,” changing their website URL and their Instagram handle to the new name on Thursday.

On their website, the trio only offered this statement: “We want to meet this moment.” In a press statement, they added, “A sincere and heartfelt thank you goes out to ‘The Chicks’ of [New Zealand] for their gracious gesture in allowing us to share their name. We are honored to co-exist together in the world with these exceptionally talented sisters. Chicks Rock!”

Right, it’s a good idea to check whether there’s another act using the name you want to adopt *before* you go and adopt it. The Lady Antifa Chicks were smarter about that than Lady Antifa Antebellum was.

I take three lessons from this. One: We seem headed into a future in which band names that use any longstanding colloquialism for the south are verboten. Stigmatizing “antebellum” was bad enough, although there’s some weak logic to it inasmuch as the term is always used to describe the south’s slavery era. Stigmatizing “Dixie” is really pushing it. Right, right, the term was also used to describe the antebellum south, most famously as the title of the famous 19th-century tune we all know, but it’s stuck around for ages as a generic reference to southern culture. The Chicks got their band name from a Little Feat song called “Dixie Chicken,” not some nostalgia for the 1850s. They’re from the south, they’re a country band, so they threw “Dixie” in. They have nothing to apologize for. But life’s easier in a woke era when you play ball, I guess.

Two: You can never prove your good intentions so definitively that you’ll be cut some slack on a perceived transgression. Think who we’re talking about here. This is a band that famously opposed the Iraq war in 2003, telling a British audience they were ashamed that the president was from Texas, and did so knowing that the conservative country audience would punish them for it. Their most famous song is a feminist anthem about killing a wife-beater. They have a “Causes” page on their website and lead singer Natalie Maines has “Black Lives Matter” as her Twitter bio. Their new single, which you’ll find below, is as down-with-the-struggle as a song can be. In a sane world, critics would pause to reflect that these people ob-vi-ous-ly don’t mean to glorify American slaveholding by including the word “Dixie” in their name and give them the benefit of the doubt on it. But we don’t live in that world. As one wokester writing recently for Variety put it:

When white people say they want to hang on to their cultural artifacts, regardless of how they might make minorities feel, it’s the most passive-aggressive expression of white supremacy. They are basically saying their history and heritage is worth more than the history and heritage of Black people. Who cares if the Confederacy and words like “Dixie” conjure memories of a time when Blacks were in chains? Apparently white Southerners matter more.

If we find some black people who think the term “Dixie” is fine as a reference to the south generically, which we certainly could, how does that complicate the issue? If we polled black Americans and found that, say, two-thirds think the term is fine, what then? It’s bad enough to have a cultural rule that makes a so-called victimizer’s intentions are irrelevant but worse if even most of the alleged victim class doesn’t feel harmed by it. Let’s take that poll.

Three: The name change seems like at least as much of a pure promotional stunt to sell records as it is an earnest gesture towards political correctness. The Chicks have a new album out next month for the first time in 14 years(!). They’d naturally be worried about some fans having lost interest in them and younger fans having little idea of who they are. They put together the politically charged single below to reintroduce themselves, but maybe that wasn’t enough — especially after Lady Antebellum inadvertently put them on the spot by declaring colloquial references to the old south as shameful. Maybe they decided to kill two birds with one stone, getting the bien-pensants off their back (to the extent that anyone except the Variety guy was on their back) and earning a round of free press by formally changing their name. (It worked too! I would never have posted this video otherwise.) There’s just one wrinkle: If this is a stunt to drum up interest, they must have hit upon it very recently. Some copies of their new album feature the name “Dixie Chicks” instead of “The Chicks,” suggesting a very recent decision. They must have been spooked by the Lady Antebellum episode and decided quickly to do the name change, expecting that the buzz would make it worth their while by producing more sales. Probably right.