Scientist: We could see up to 1,100 additional daily coronavirus deaths from these protests if they’re large enough 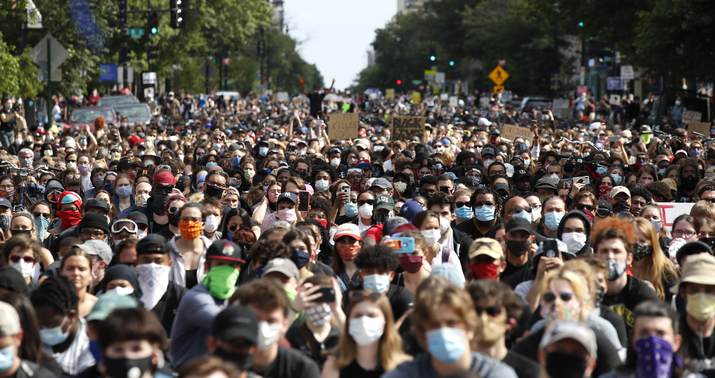 Bear in mind that the U.S. is averaging around 900 deaths or so on weekdays lately. If the high end of these estimates bears out, the protests will have caused the daily national death toll to more than double.

Trevor Bedford is the Seattle researcher who used genomic analysis early on in the pandemic to detect hidden community spread in Seattle, the first big clue that America had a more significant COVID-19 problem than it realized. He’s watching the mass demonstrations against police brutality this week with growing concern, knowing that from an epidemiological standpoint the “mass” part is all that matters. The virus won’t make exceptions in the name of progress.

What sort of uptick can we expect from the protests? He tried to quantify it.

These infections will percolate through the community and be realized over the coming weeks. Assuming an IFR of between 0.5% and 1%, we would expect these ~54k infections to result in 270-540 eventual deaths per day of protests. 7/12

My (updated) best guess is that each day of protests involving 600k people will result in between 200 and 1100 eventual deaths. 9/12

Note the last bit. He’s not claiming that *any* protests will kill hundreds. He’s assuming 600,000 participants in the aggregate nationwide. I’m guessing we reached that number on Saturday given the huge rallies in D.C. and Philly, among other places…

The crowd in Philly is…unfathomable? I can’t even guess. Unbelievable. pic.twitter.com/02ZIcyTXW5

…but maybe we haven’t reached it on (m)any others. Six hundred thousand people protesting on a given day is a lot — but given how many protests there have been scattered across the country this past week, I wonder if maybe we’re clearing that threshold more than we know.

Let’s not kid ourselves either that any increase in the numbers will necessarily derive from the protests. Reopening the country is boosting infections too. I’d feel safer outdoors in a large crowd in the sunshine with a mask on while in constant motion than I would hanging around a casino right now:

Las Vegas is officially back. pic.twitter.com/EI3nXs2e5w

The Vegas clip shocked me more than the protest clips did because of how normally everyone is behaving. Mass demonstrations are many things but “normal” isn’t one; the Vegas footage looks like it came from an alternate dimension in which there’s no coronavirus, though, with a few stray masks being worn by gamblers the only hint of a lurking threat. Most Americans aren’t behaving that recklessly — majorities still say they’d be “somewhat uncomfortable” eating at a restaurant or attending a public gathering — but the backsliding on social distancing has clearly begun. “America Has Given Up on the Pandemic” write two authors at the Atlantic:

Americans have not fully grasped that we are not doing what countries that have returned to normal have done. Some countries have almost completely suppressed the virus. Others had large outbreaks, took intense measures, and have seen life return to normal. Americans, meanwhile, never stayed at home to the degree that most Europeans have, according to mobility data from Apple and Google. Our version of the spring lockdown looked more like Sweden’s looser approach than like the more substantial measures in Italy, or even the United Kingdom and France. Swedish public-health officials have acknowledged that this approach may not have been the best path forward…

Maybe the U.S. will somehow avoid another New York–style outbreak. Maybe the number of new infections will not grow exponentially. Maybe treatments have sufficiently improved that we will see huge outbreaks, but fewer people will die than we’ve come to expect. If so, it won’t be because the United States made concerted, coordinated decisions about how to balance the horrors of the pandemic and the frustration of pausing everyday life. Instead, the United States has moved from attempting to beat the virus to managing the harm of losing.

“[M]oved from attempting to beat the virus to managing the harm of losing” captures a lot about American politics and culture in 2020. The country doesn’t meet great challenges anymore; it doesn’t really even attempt to. It simply manages the rate of its failure. We’ve succeeded in reducing the death toll from one 9/11 per day to two 9/11s per week. That’s something, no? That’s progress. Or what passes for progress in a decadent nation.

What’s amazing, though, is that even our public health experts seem satisfied with an elevated death toll under certain circumstances. Jaws dropped over the weekend on conservative social media at this new tweak to Contra Costa County’s stay-at-home orders:

I keep re-reading this over and over again. pic.twitter.com/ioc215FmxD

To my mind the most obnoxious defenses of the protests in an age of pandemic are the ones that insist on justifying them as a matter of public health, not as a fundamentally political or cultural movement for racial equality. At Slate Susan Matthews strains to frame the demonstrations that way because she knows it makes the egregious double standard somewhat easier to swallow: “Police brutality—and racism more broadly—has an enormous and well-documented impact on public health and loss of life… So it’s not wrong for public health experts to take the purpose of the protests into account when making this assessment, particularly when the purposes relate to matters of public health.” If you tell Americans that politics is more important than containing the virus, they’ll understandably be outraged. But if you tell them that one important public health concern may weigh more heavily than another important public health concern, that seems on its face a bit more reasonable.

But it isn’t. The salient fact about COVID-19 isn’t that it’s an “important public health concern,” it’s that it’s a novel, once-in-a-century threat to public health. Modeling at the start of the pandemic projected two million Americans dead if no countermeasures were taken. We shut down the entire economy and still lost more than 100,000 people in less than three months. Nothing compares right now. Lockdown opponents have spent months arguing their position in terms of public health, in fact: No economy means unemployment and bankruptcies, which means suicide and drug addiction and domestic violence and all manner of social ills on an unimaginably vast canvas the longer businesses remain shut down. The likes of Matthews didn’t want to hear it. Nothing compares to the virus right now, they countered. I think they were right; we averted 60 million infections by locking down, according to one study. But ultimately they didn’t think they were right.

Here’s a simple thought experiment to puncture the “important public health concern” nonsense. Would any public health expert have condoned mass demonstrations at this particular point in the pandemic for any other public health concern? Instead of rallies against police racism, imagine someone wanted to organize a million-person march on Washington for breast-cancer research funding or Alzheimer’s research funding or any of a thousand other worthy — and urgent, given the number of victims — health causes one might champion. Can anyone imagine our scientific class declaring why, yes, this gigantic mass gathering amid rampant infection and death on behalf of a public health priority is welcome? Or would they have said good cause, but you’re out of your mind? Is there any doubt? Scientists are going to lose public trust either way for subordinating public health to political advocacy by endorsing the protests but they might lose a tiny bit less if they at least copped to what they were doing forthrightly.