What: NBA players will wear ring that can (probably) detect COVID-19 — before they’re symptomatic 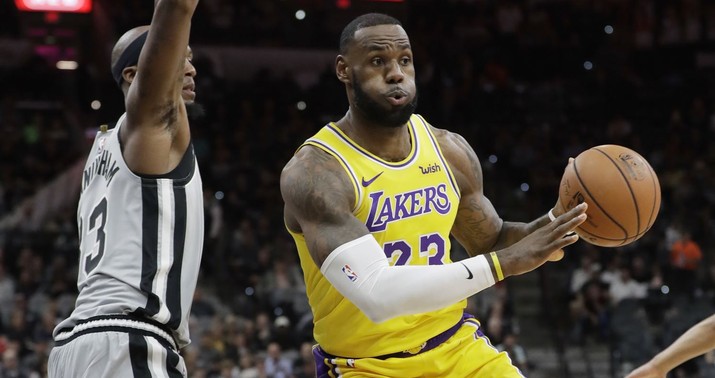 “Definitely glad this tech is benefiting pro basketball players, rather than, say, people who live or work in nursing homes,” says one Twitter pal.

But that’s just it. This tech is available to people who live or work in nursing homes — and everyone else. It’s not military technology developed by the Chinese government and bestowed on their loyal servants in the NBA. It’s the Oura smart ring. And *supposedly* it can detect the onset of COVID-19 with 90 percent accuracy up to three days before symptoms begin showing.

I feel like … we should have heard more about that already. The reason it’s so difficult to control the spread of the virus is that people are infectious before they’re symptomatic. They’re transmitting the virus unknowingly before they recognize the need to isolate themselves. If there’s a device out there that can detect a likely infection much earlier than we can now, a sort of early-warning system to pre-symptomatic carriers that it’s time to quarantine, that could have enormous implications for the pandemic. Why weren’t we told about this sooner?

Eh, look at it this way. Given how much the CDC sucks nowadays, you’re probably hearing about it before they do.

The RNI platform uses the Rockefeller Neuroscience Institute app, the Oura Ring, and artificial intelligence (AI)guided models to forecast and predict the onset of COVID-19 related symptoms (e.g. fevers, coughing, breathing difficulties, fatigue, and others) three days in advance with over 90 percent accuracy. This technology can potentially serve as a critical decision making tool to help contain the spread of the virus, safely re-open communities, strengthen the economy, and facilitate public health containment strategies.

Couldn’t fitness trackers be tweaked to do all of the physiological monitoring that the Oura ring does as described there? Fitbits do most of it now. Americans have already adopted fitness trackers en masse and millions would doubtless upgrade for a watch that can be paired with the RNI platform to “predict” COVID-19.

I can only assume that scientists doubt whether this really works and that’s why we haven’t heard more about it. But it works well enough to have landed on the NBA’s radar as a useful precaution once the league resumes play soon in Orlando.

One of the tools the NBA will use with players is a “smart ring” that players will wear during their time at Disney World. The ring can measure body temperature, respiratory functions and heart rate, which are all things that can signal whether or not someone is sick. All players and essential staff members will be given the option to participate in health monitoring using the ring. The titanium rings, reportedly made by Oura, are capable of predicting COVID-19 symptoms up to three days in advance with 90% accuracy, according to the company.

The data will be studied and assessed by the University of Michigan to help generate an overall wellness assessment of each person. The memo said that players will have full access to all data collected on them, but team staff will only have access in circumstances where the player’s illness probability score indicates he may be at higher risk or is showing signs of coronavirus.

They’re also getting Disney “magic” wristbands, which will get them through checkpoints at the complex but also allow for contact tracing in case they get sick. Smart thermometers and oximeters will be handed out as well, along with some sort of proximity sensor that will alert them by buzzing if they spend more than five seconds within six feet of another person. Essentially they’re going to “bell” every player in the league, or at least offer the option. None of this stuff is mandatory, it seems, just sound precautions given the reality that even a single infection could have a cascade effect that forces the league to cancel the rest of the season.

By the way, and much more importantly, there’s further evidence that the massive demonstrations since George Floyd’s death aren’t producing a wave of new coronavirus infections. I wrote about that last night but the WSJ has numbers today from Minnesota, the heart of the protests:

In Minnesota, where the police killing of George Floyd led to protests there and across the country, 1.8% of test results have come back positive as of Monday among 3,200 protesters who were tested at community sites, the state’s health department said. An additional 8,500 Minnesota protesters have been tested through their health-care providers or at other sites, with a positivity rate of 0.99% so far, according to the department.

“We’re delighted that we are not seeing a huge increase in cases,” Kris Ehresmann, the infectious disease division director at the Minnesota Department of Health, said at a media briefing on Wednesday.

By comparison, the country writ large has a positivity rate of 4.5 percent or so. A group of protesters is thus less likely to be infected than an average group of Americans. But don’t celebrate yet: The Journal points out that doctors are watching to see if there’s a wave of secondary infections from the protests, i.e. people who’ve been infected by those who went out to demonstrate and then brought the virus home with them. It may be that the reason there are so few primary infections is that the protesters skew very young as a group. If they’ve transmitted the virus since then to mom and dad or grandma and grandpa, those patients won’t be as resilient. If there’s a wave of secondary infections brewing we should see that in a few weeks.